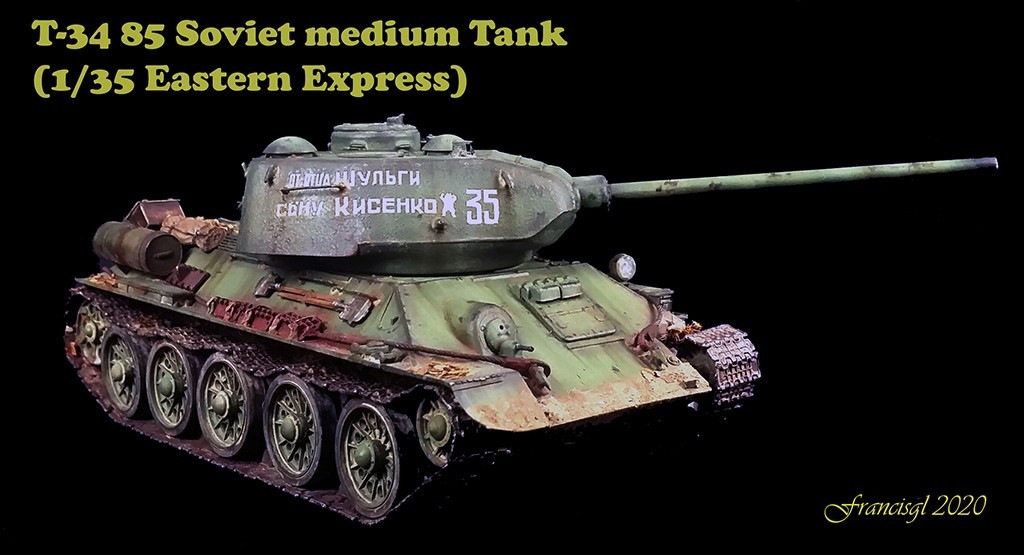 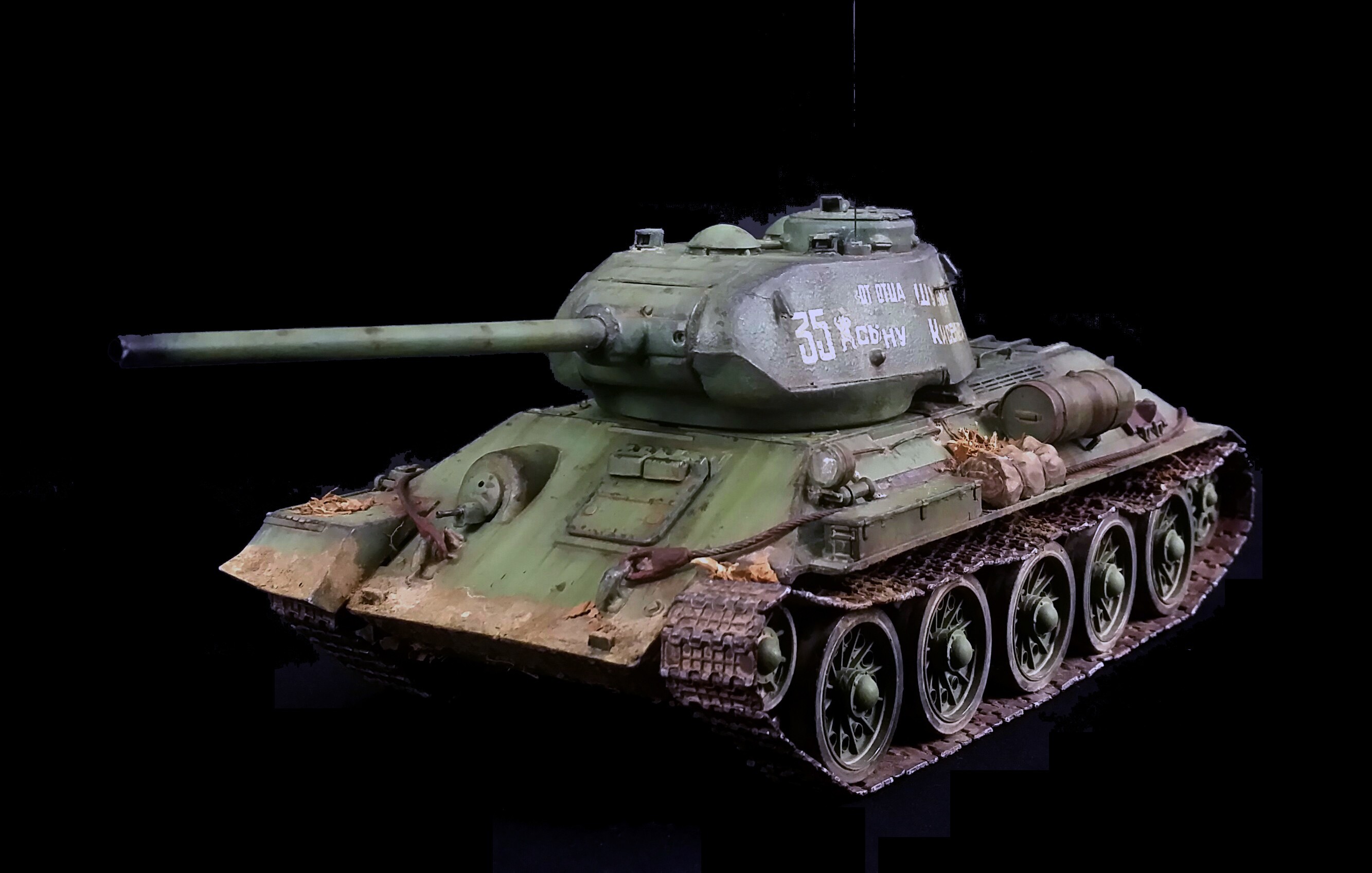 A new model that comes off the bench (and the stash -- sigh of relief), again a piece of Soviet armor, in this case one of the most iconic subjects of the red arsenal, a T34. The kit is from a brand unknown to me, Eastern Express, a priori, a brand of interesting models but of inferior quality and cheap price.

I decided to try one of his kits, because the price was really ridiculous, and on paper, it included interesting things in exchange for a few "bucks". In addition, it was brought directly by a good friend who went to Ukraine to see her relatives, so I think I spent little more than 10 euros.

When you open the box, you can see that it comes well packed and with many parts, the grilles for the motor are mesh, but with very large holes, so it is unusable. It includes links to link tracks, a good point, and they are pretty decent too IMHO.

The detail of the cast in the tower is also present, very nice, although I have added something else, and PE welding lines in some points. Then, on the negative side, the instructions are pathetic, some photocopied loose sheets, which must be numbered, and also very confusing in some points.

And the worst thing is the rear of the engine, the fit is very bad, it is not possible to adjust it conveniently, so you have to sand a lot and even cut a piece, and then putty. This will undoubtedly not please the most demanding with the precision of the kit, and with good reason, of course. Despite everything, for just over 10 euros, it is worth trying, either as a guinea pig or to rule out future purchases (in my case, no more EE).

The assembly is not very complicated if you have some experience and skill, because the instructions are hilarious (lol), and some points are "hard to peel", like the upper rear part of the engine, what I thought was going to be a quiet and fast assembly, it got stuck and a lot there.

Then the tracks, link by link, were not bad at all, although I had to adjust where the teeth were in some places, so that they did not overlap, once again, some experience and skill solved a problem with the kit. The grille of the engines was replaced by a finer replacement, fixed. The barrel was changed for another metal one that had a spare, although the plastic one seemed ok. I added copper trailing cables from Eureka that I had for the occasion (includes some very bad wire).

I added some spare parts equipment that I had, and they could serve me, buckles for the spare tracks, antenna, and wire for the handles of the model. As for the paint, first a layer of black to prime, and then I tried another shade of green, lighter, modulating the intensity at various points.

Then, as always, the weathering process began, with washes with oils and pastels, chips and scratches, until I was satisfied with its appearance. I added pigments to the bottom and sides to simulate dry mud, along with dry vegetation at certain points. Finally, a layer of satin varnish to seal all the work. I think the end result IMHO looks a lot like a T-34 85.

I hope you like it, thanks for watching and comments as always. 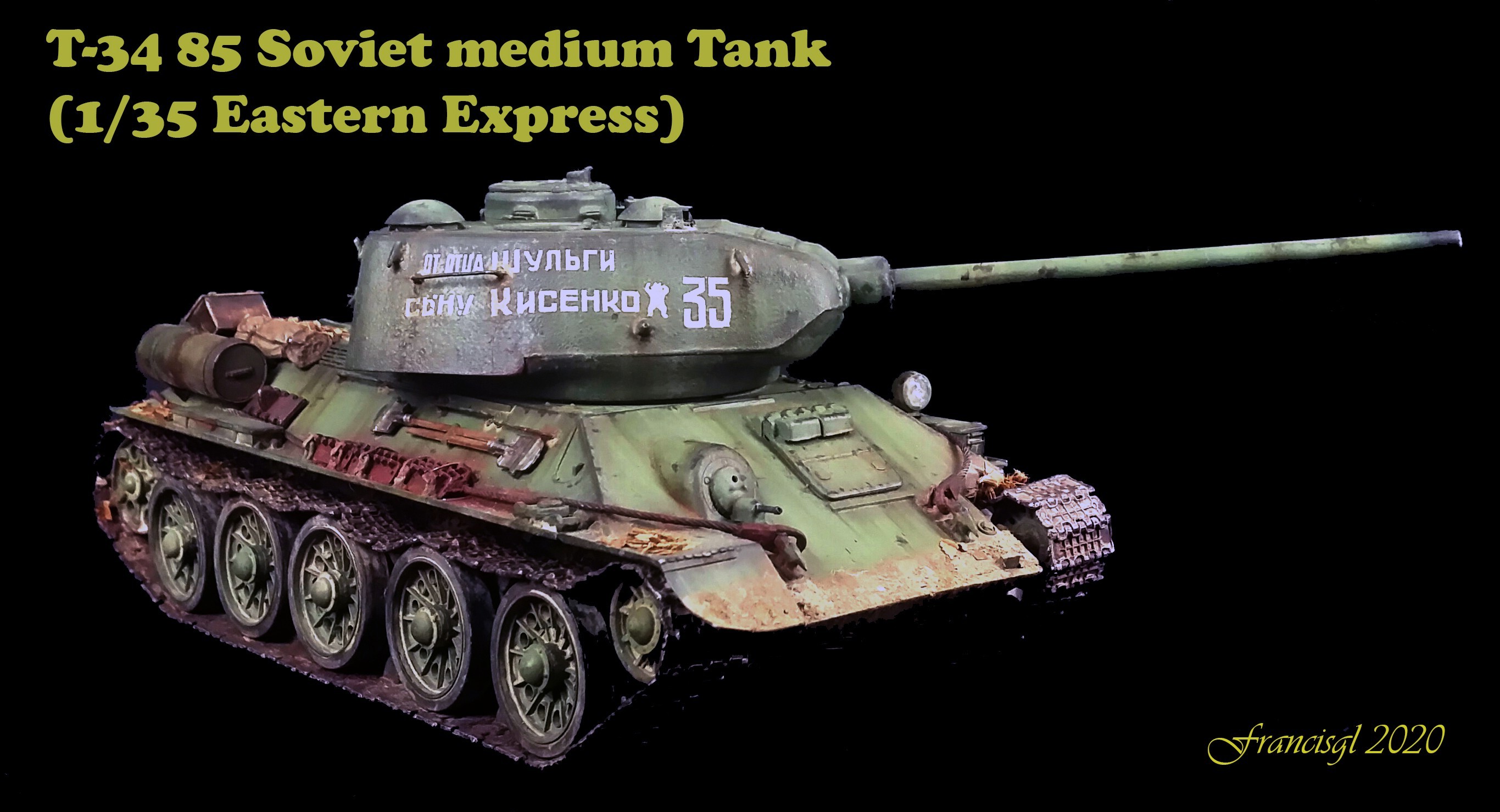 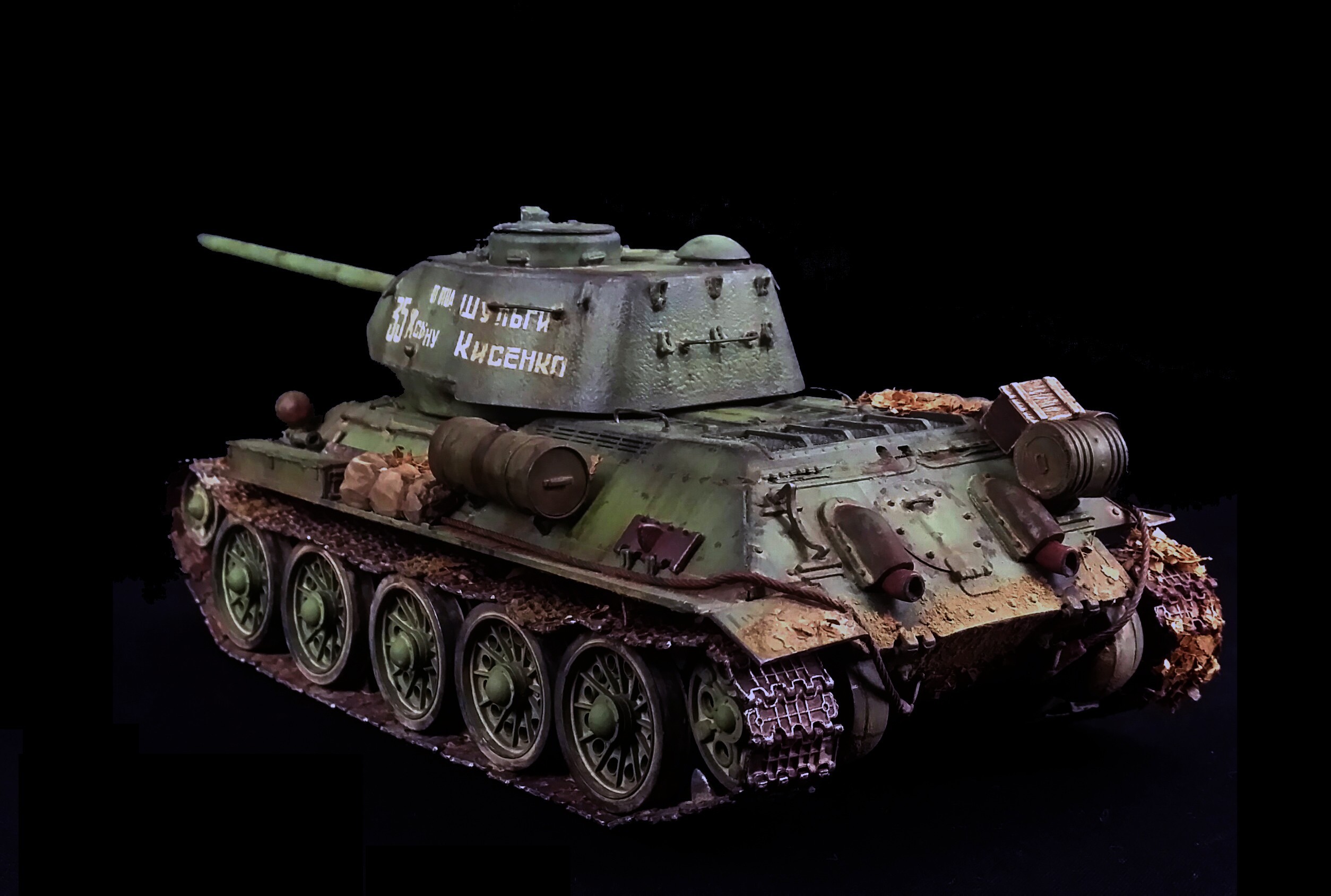 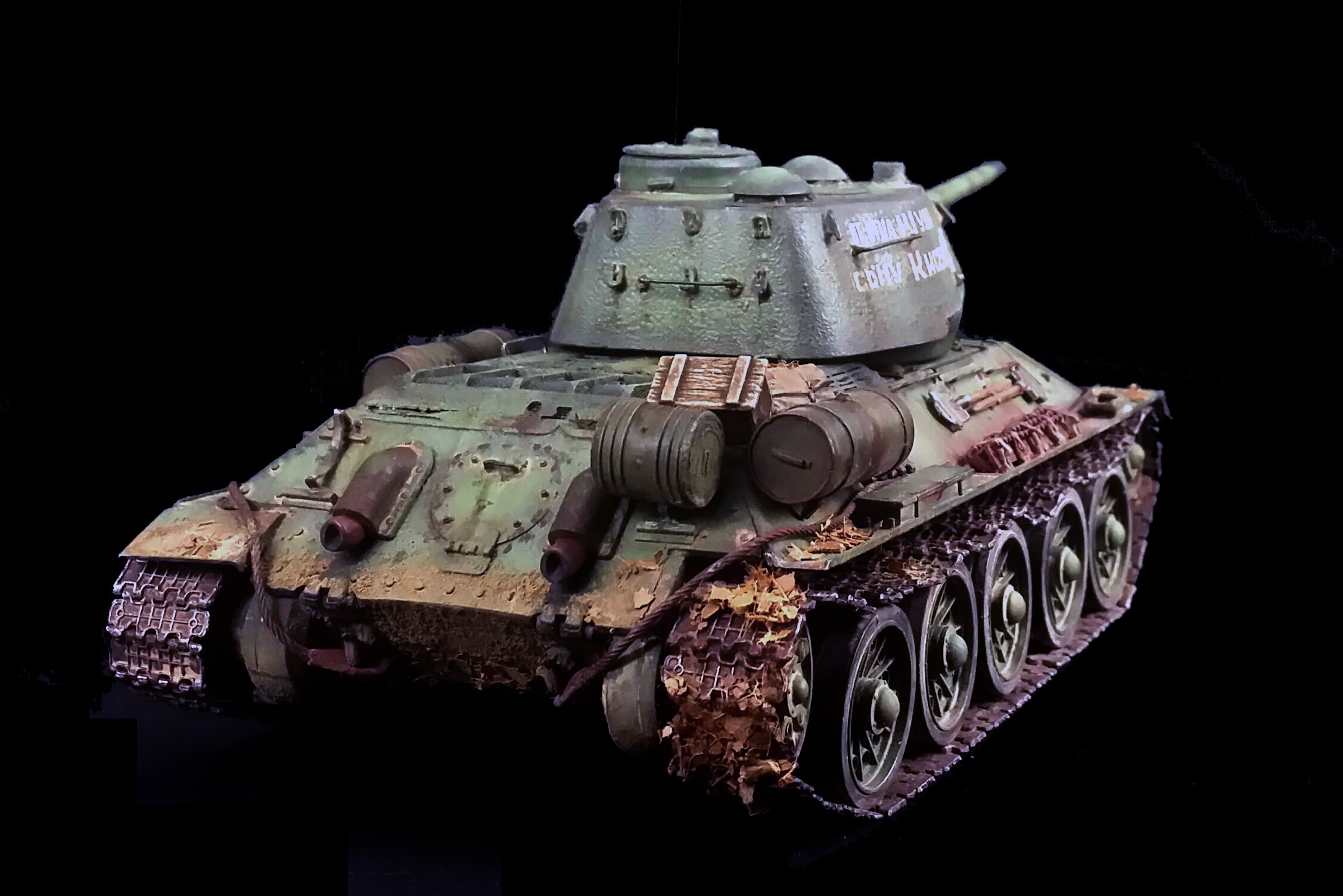 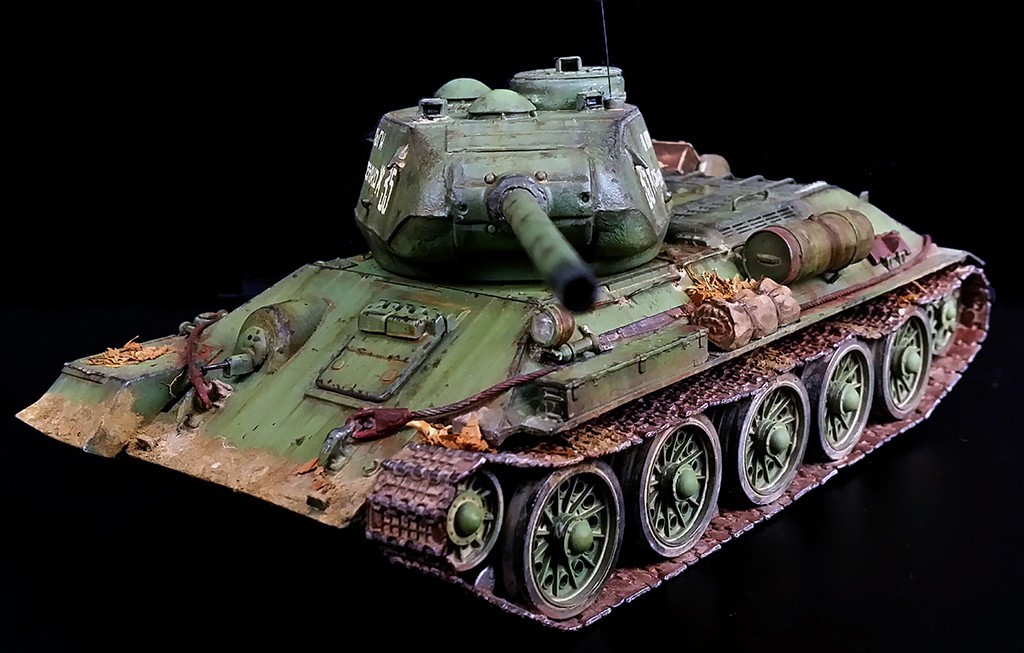 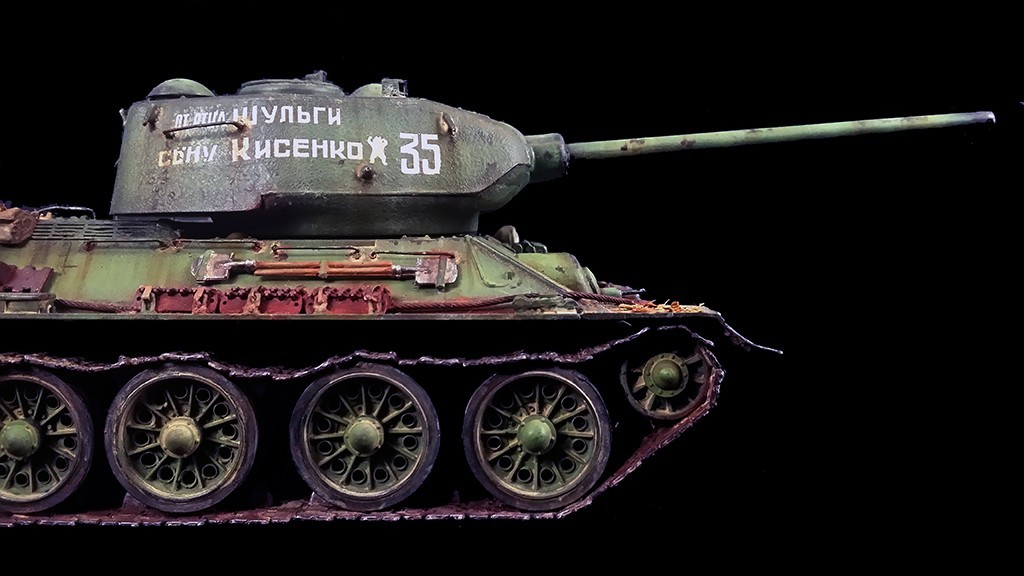 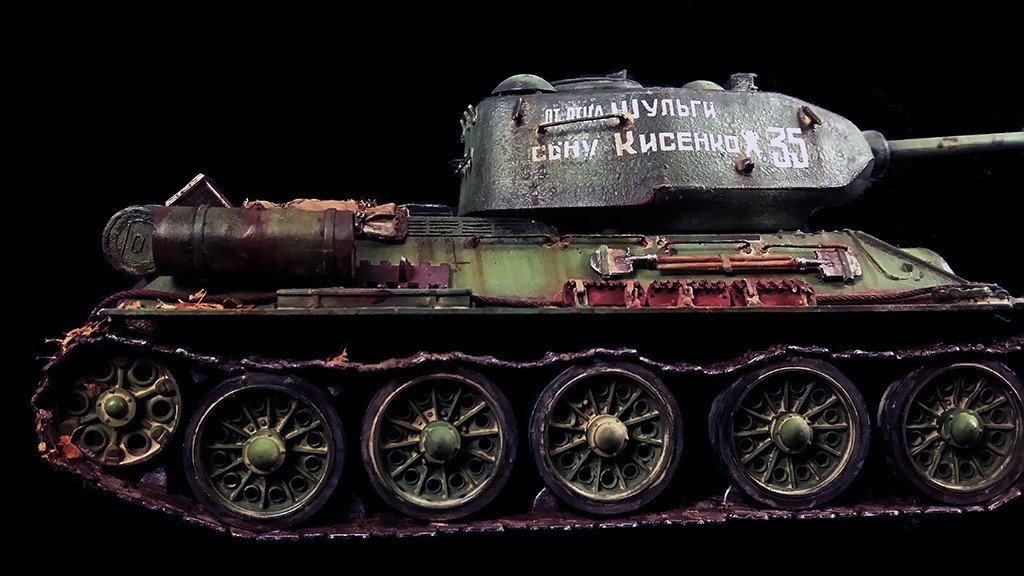 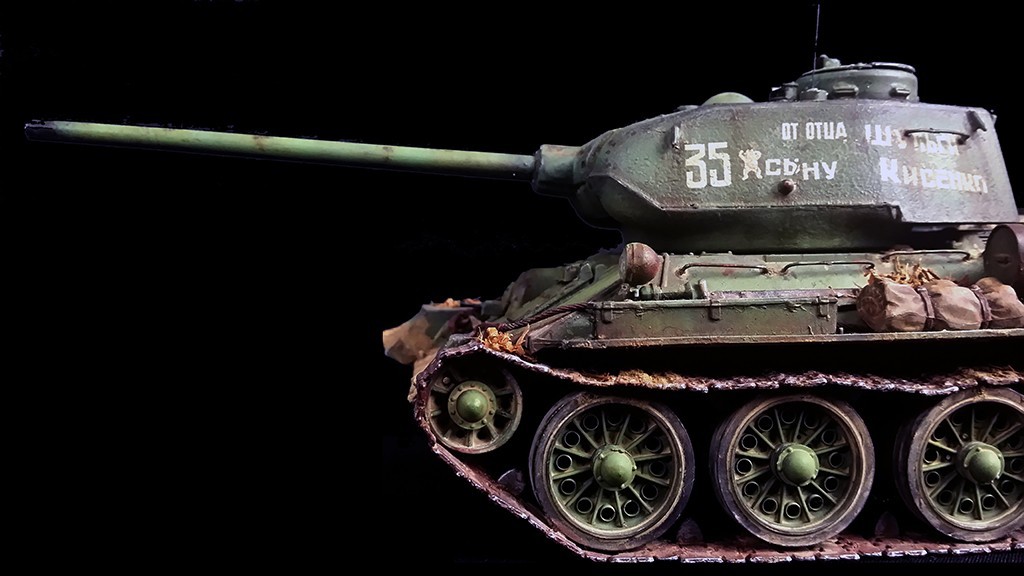 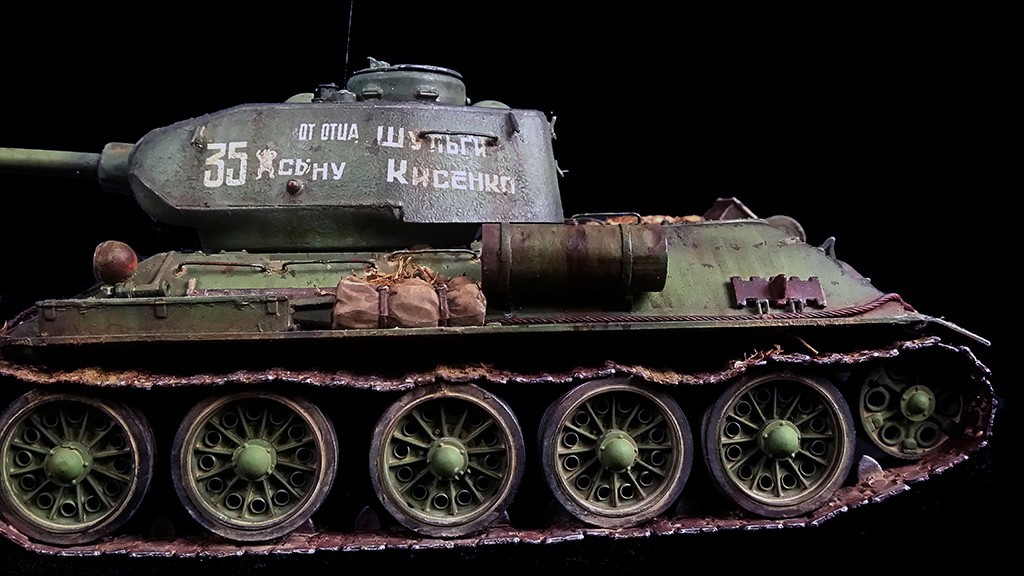 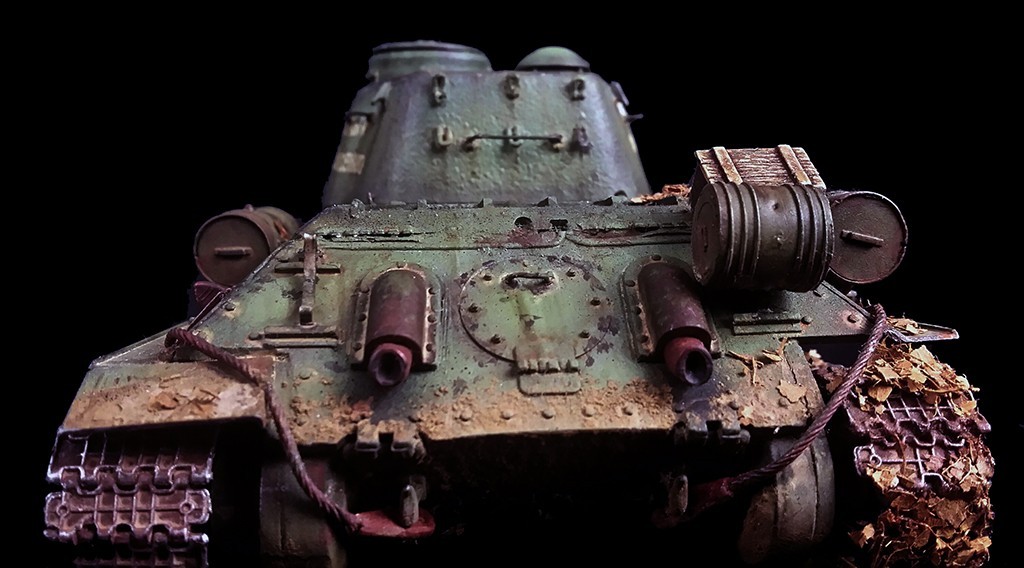