JPTRR
Editor
posted on 1 month ago — updated on 1 month ago
2,257
views
TANKS AT THE IRON CURTAIN 1960-75 is a new title from OSPREY PUBLISHING in their New Vanguard series. Written by Steven Zaloga and illustrated by Philippe Rodriguez, this book features data tables, archive photos and illustrations of key tanks in Cold War service and explores the tank technology across the Warsaw Pact and NATO. 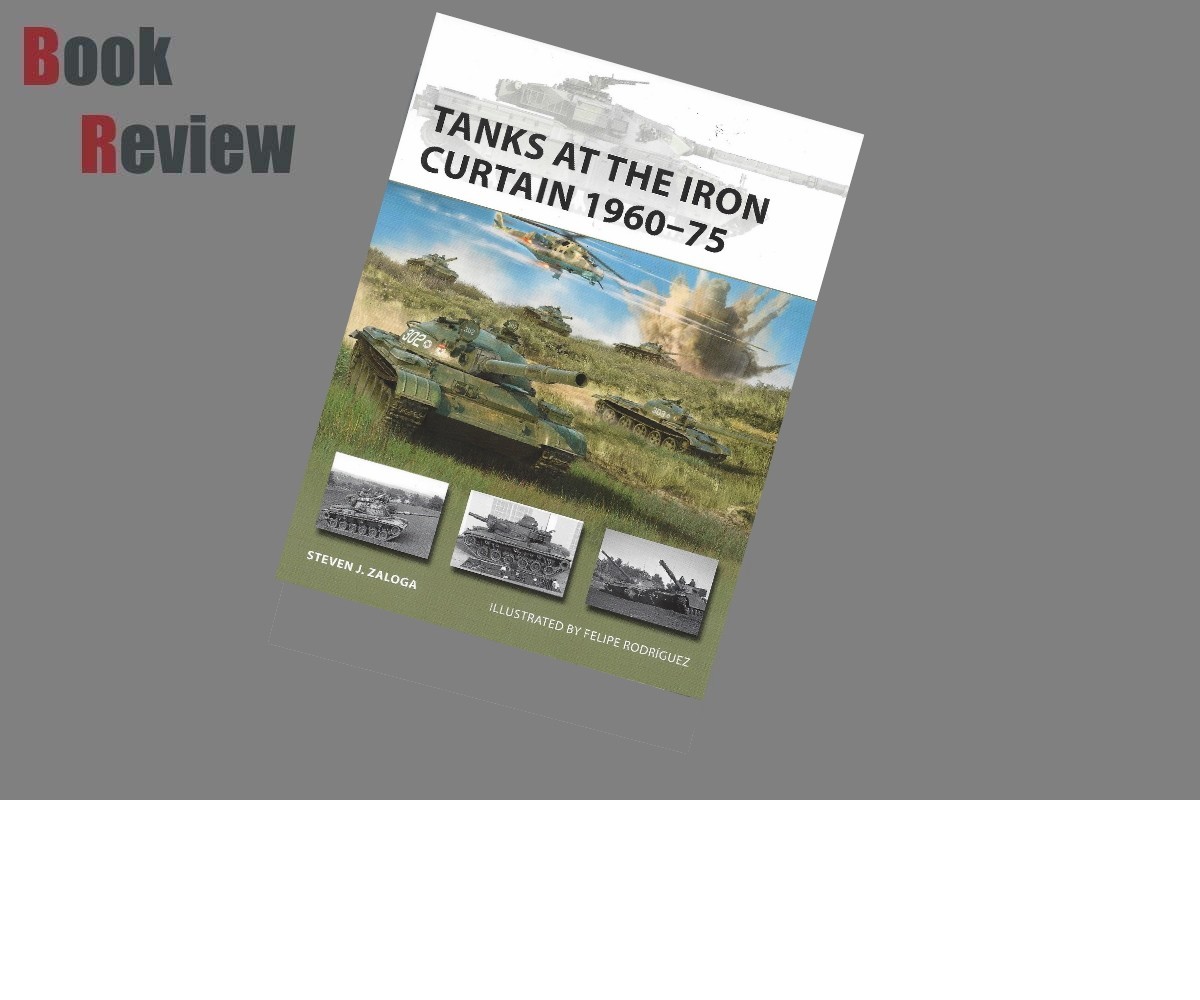 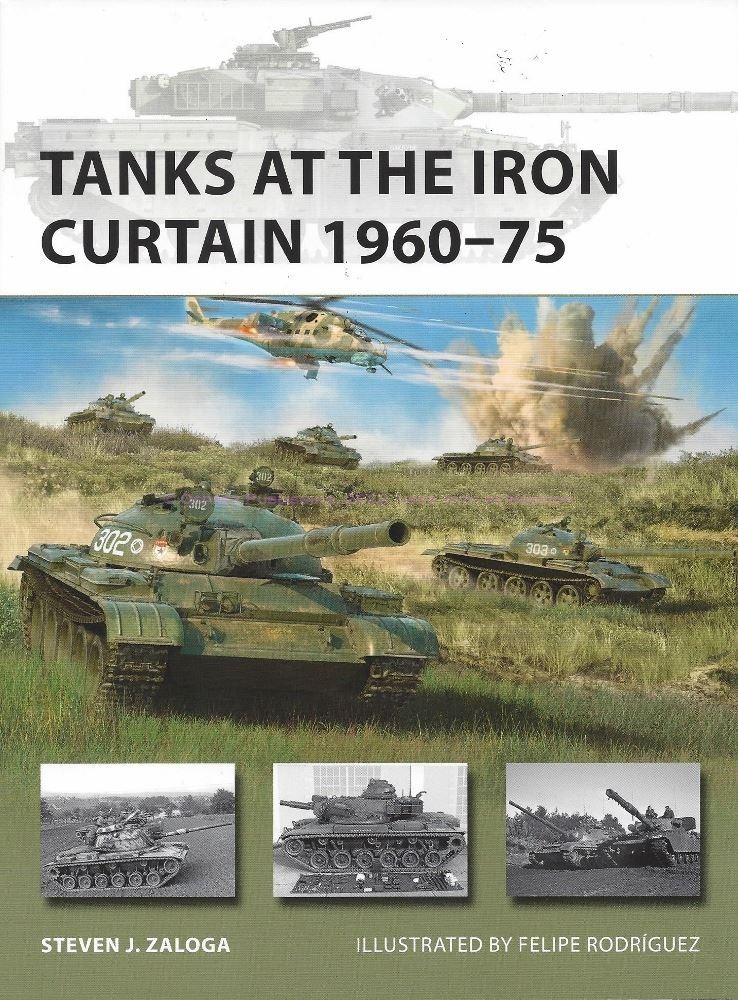 Tanks at the Iron Curtain 1960-75 is the 308th title in the New Vanguard series from Osprey Publishing.  Authored by armor expert Steven Zaloga it follows the standard New Vanguard 48-page format.   Illustrated by Felipe Rodriguez, the book is cataloged with ISBN 9781472848161, and as NVG308.   This is book number two in a series of three.

Following the format of New Vanguard books, Tanks at the Iron Curtain 1960-75 is told through these chapters:

The Tanks, Doctrine, and Organization

Tanks at the Iron Curtain 1960-75 starts with a small glossary on the inside of the title sheet. Introduction discusses the protagonists and forward deployed Allies.  It focuses on the major players - Americans, British, French and Germans - not the smaller NATO members that did not manufacture their own tanks. The same attention is applied to the Warsaw Pact.  It introduces us to the changes in tank development at the advent of the guided anti-tank missile.  From 1960-75 tank designers concentrated on developing tanks that could withstand a nuclear and chemical environment while fighting with guided weapons of their own. The book progresses to the Tanks, Doctrine and Organization, starting with the Soviet Union. The backbone of the Soviet tank force was the T-55, with focus on development from it. The author presents both technical and political considerations, i.e., Nikita Khrushchev demanding the new T-12 100 mm smooth-bore antitank gun to be installed in at least 200 tanks by 1959. Other Russian tank weapons are explored as well, including one called “Khrushchev’s bastard.”  Discussed is the idea of fitting stabilizers to the guns, and the various projects such as Obiekt 432 (T-64).   Several pages are dedicated to the rise of the missile tank. Prototypes and experimental types are covered as well such as Obiekt 279 - that frisbee dish-hull creation with four separate track assemblies to carry it along. Addressed is that in the early sixties the Soviets realize that NATO tanks had achieved greater technical capability than Russia’s and that they had to catch up. This is shown in computer analyzed tank effectiveness tables created by the Soviets, which led to decisions about heat rounds and other combinations of armor, weapons, and mobility.   Interesting to read is the Polish and Czechoslovakian license to produce T-55s and a speculation why they did not produce modern Soviet designs until much later.

Many pages are assigned to tank development by the United States to replace with a single tank the M48 series and the M103 heavy tank. Next, we learn about the Missile Tank Debacle of the United States. Radical alternatives were explored and what eventually became the MBT-70,  while improvements to the M48 and M60 family are covered. United Kingdom tank development discusses the Centurion through the Conqueror to the Chieftain,as well as the Scorpion and Striker. Next the book covers Germany's transition from M48 into the Leopard family and Germany’s dedicated missile tank destroyer, the Rackettejagdpanzer I.  French contribution to the tank race is not neglected although it is only two pages.

In Tanks in Battle the author covers combat between the tanks.  This focuses on American involvement in Vietnam and the weapons involved in the Middle East conflicts. While it's covered in many other books, the slaughter of Israeli tanks by Saggers in the 1973 Yom Kippur War eventually dropped significantly, leading to the United States conclusions about the missile/tank standoff. Also noted was that 1973 was the first widespread use of armor-piercing fin-stabilized discarding-sabot projectiles and the subsequent widespread adaptation of the type.

Finally, Technical Analysis focuses on firepower, fire control, protection, mobility and finally concludes with tank comparisons.   This part surprised me and I will be interested in reading any comments by site members who have ‘been there done that'; it is interesting that growing up hearing that the Red Army was 10 ft tall and bulletproof, how the Soviets compared their combat effectiveness to NATO tanks based on Soviet computer-based assessments.

An appreciated facet of modern tank books is that the majority of the photos are in color. Not only do we see portraits of whole tanks but also photographs of detailed photographs of specific components, and even inside a Czechoslovakian-manufactured T-55 turret. I did not count them but I guess half the images in the book are in color.  Most look like they were taken in the field, although there are a couple that are of museum pieces such as Obiekt 279, and Obiekt 757. I think the book is also very useful in that the color pictures photos are a good source of reference for modelers - always seeking to find that perfect shade of olive drab, bronze green, and 4B0.

1.  T-62, Group of Soviet forces – Germany: shown in profile and planform. The narrative refers to the Soviet Manual of Engineering Equipment and Methods for the Camouflage of Ground Forces, citing three camouflage combinations, and Soviet Tactical numbering.

3.  Chieftain Mk.6, 4th RTR, British Army of the Rhine, Germany features both left and right profiles as well as front and rear illustrations of a Chieftain, in the British temperate scheme; it discusses the colors and the finishes as well as tactical markings.

4.  Leopard 1A1A2, 4./Panzer Battalion.114, Germany shows the tank in German RAL 6014, their own version of olive drab. Again, the discussion revolves around camouflage with tactical and unit markings.

7.  M60A2, Third Armor, Third Armored Division, Germany: in profile and planform; a great deal of information on the camouflage pattern and colors.

2.  Comparative Military Technical Co-efficients: a Soviet Army assessment of the:

It includes footnotes on retrofits and tanks built but not accepted.

6.  Leopard standard-Panzer in NATO, numbers of the:

8.  T-62 versus NATO tanks by the range at which penetration is possible compared to:

12.  Combat effectiveness of NATO/Warsaw Pact tanks per Soviet computer analyzed assessments, starting with the values assigned by the Soviets using the M48, T-55 and T-62 as the benchmarks, against over two dozen other tanks. 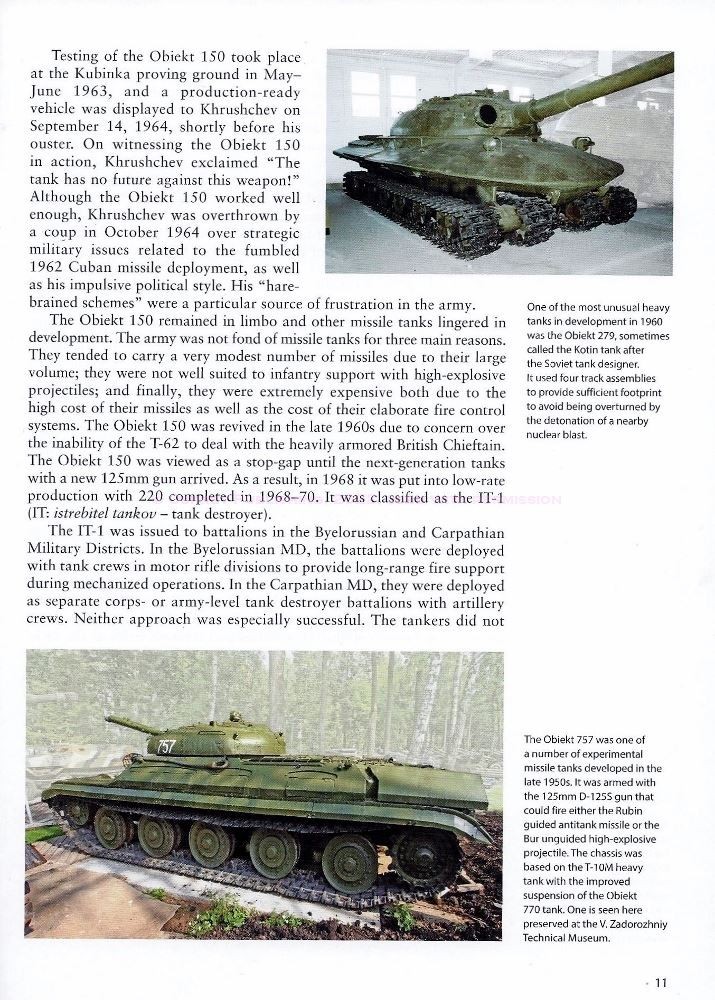 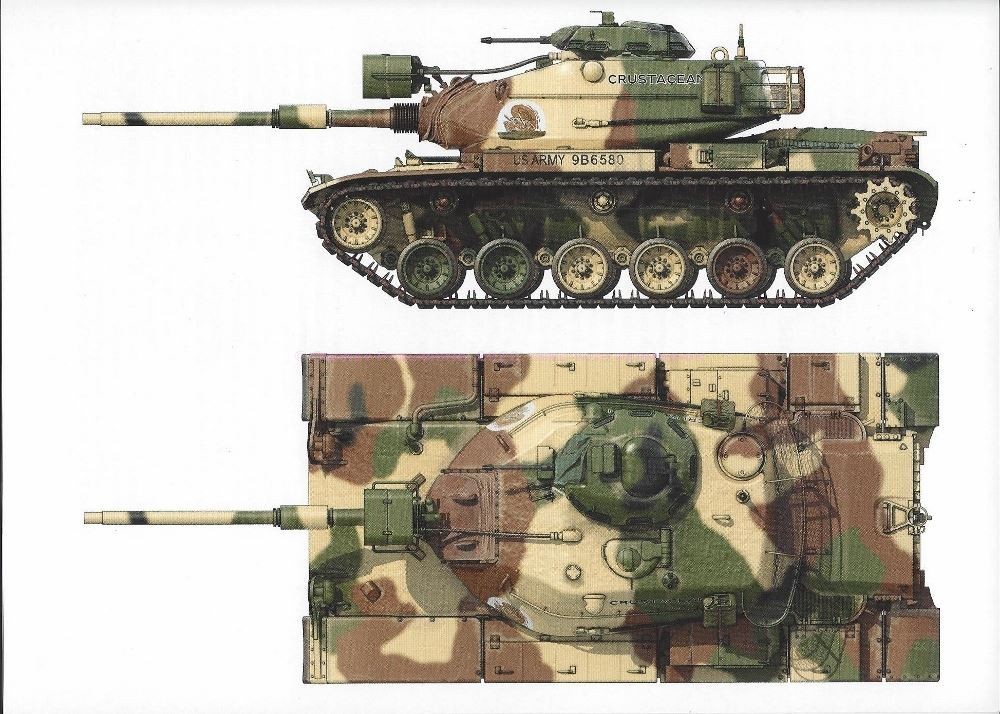 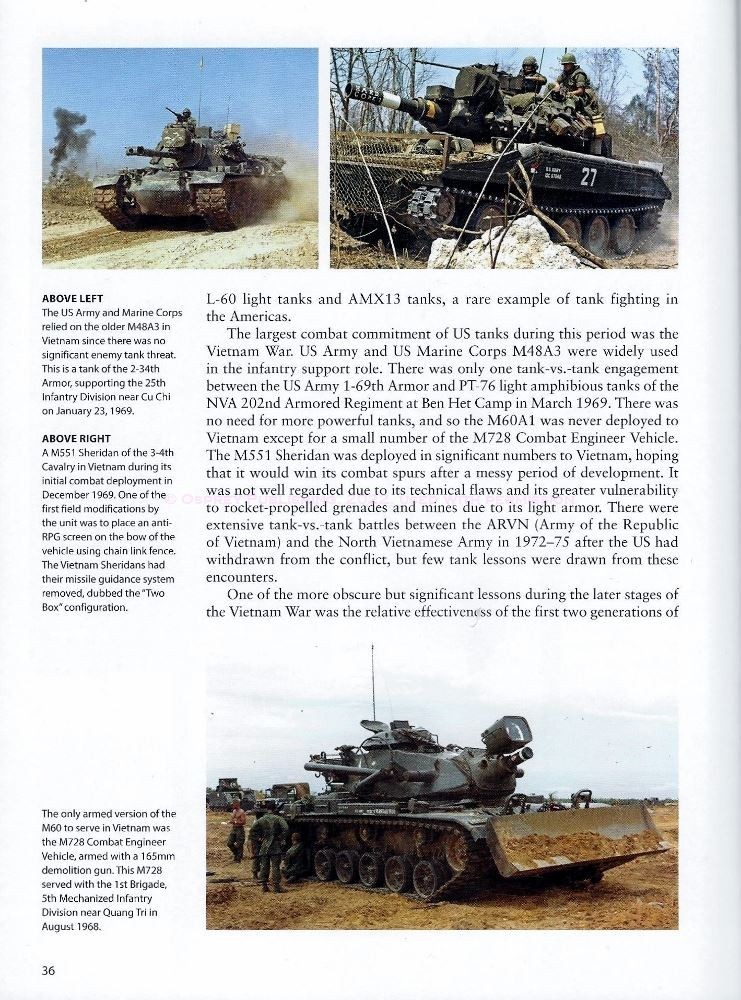 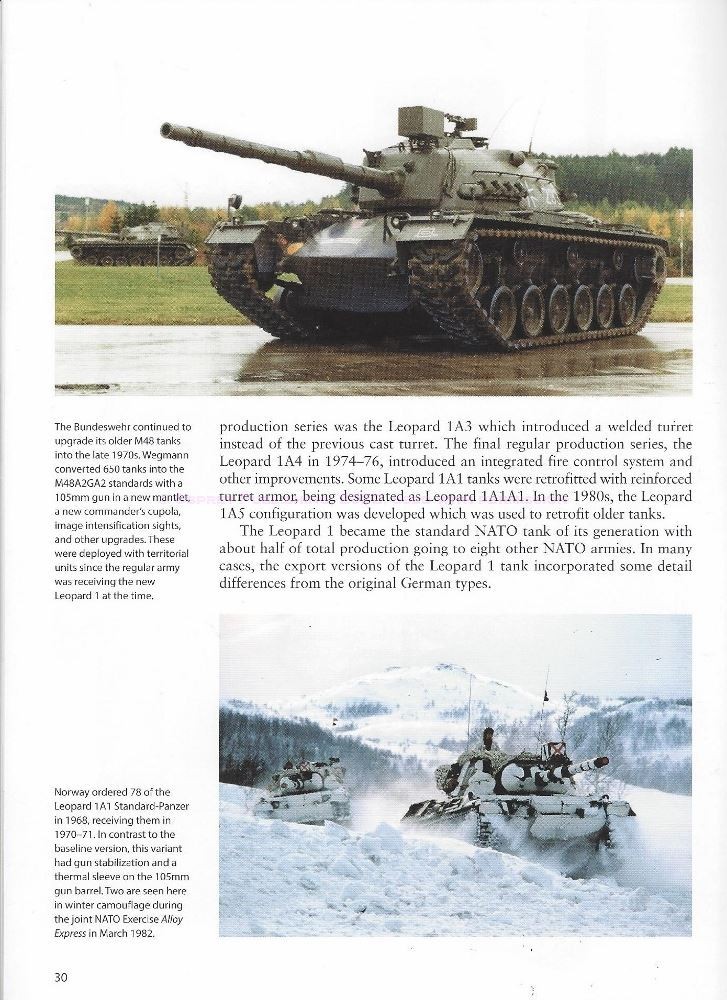 In conclusion, while Tanks at the Iron Curtain 1960-75 only nicks the armor of what is available concerning these tanks, for novices like me, it's a great starting point. I found much very interesting information that both confirmed what I believed for decades, as well as busted some of myths. With the selection of photographs to support the text, useful artwork, and numerous data tables, I think I have a better understanding of potential armored warfare in 1960-75.  Again, I look forward to the comments by veterans of the armor forces of the era, and I recommend the book.

Please remember to mention to Osprey and retailers that you saw this book here, on Armorama.