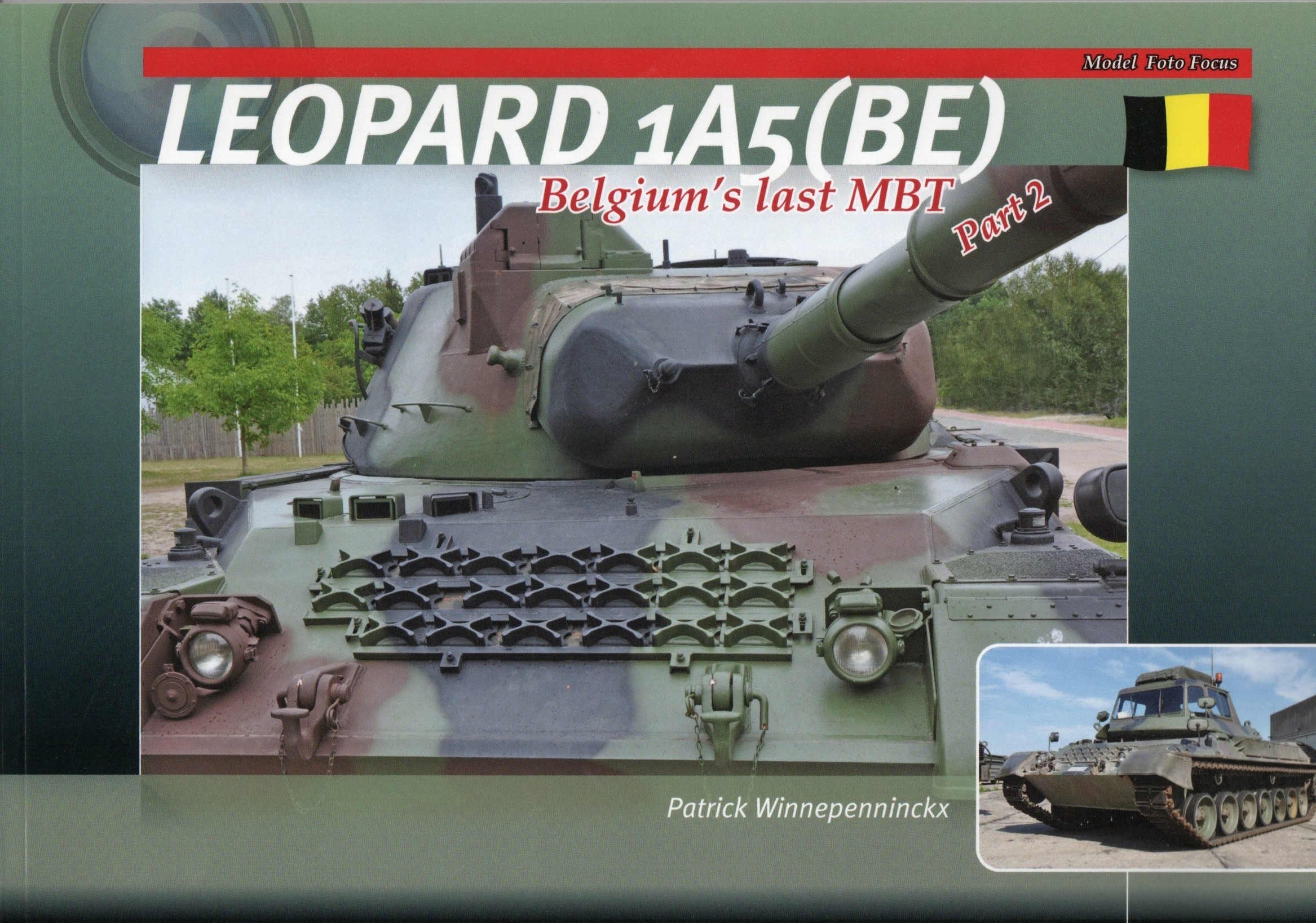 The Belgian Army was one of the first export users of the Leopard 1 and used it to replace their fleet of M-47 Patton tanks. Initially nearly identical to the German Leopard 1, they were also upgraded to extend their life with the final being the 1A5 version with improved fire control but distinct from the German Army's 1A5 version with a different improved fire control system.  It was the Belgian Leopard 1A5 that was deployed to Kosovo as part of KFOR.  The Leopard 1A5 BE is also the last tank in the Belgian Army inventory as they move to lighter-wheeled armor.

This Model Foto Focus book completes the coverage of the Belgian Leopard 1 with the prior titles of Leopard 1(BE), Belgium's last MBT Part 1, and Belgian Army Leopard 1 Forty-five Years of Service - 1969 to 2014.  Overall, a long-overdue view into one of the longest-serving Leopard 1 fleets.

The book is softcover A4 size in landscape format and 104 pages with 389 photographs.

Starting with a very useful introduction of the background of the decision to upgrade to 1A5 BE vs. purchasing a new tank, continuing with the late service testing of potential MEXAS armor upgrades, and finishing off with the usage of driver training tanks.

As with the rest of the Model Foto Focus series, the chapters are jammed full of detailed pictures of every aspect of the tank with very informative captions.

In Service is a brief view of the Leopard 1A5 BE in the field and the driver trainer tank.  Many more additional pictures of the 1A5 BE are in the Belgian Army Leopard 1 Forty-five Years of Service - 1969 to 2014 book.  A bit of history of the 1A5 BE modification testing is also included in the Prototype and Pre-series chapter plus some very interesting pictures of a 1A5 BE with the Blohm and Voss spaced armor as seen on the Bundeswehr 1A5.

360° is a quick section of the tank from a few aspects with the roadwheels, sprockets, suspension, and track covered in good detail in Running Gear.

Hull Front details the headlights, snow grousers, and other items on the front of the tank with a nice addition of the differing styles of lettering used on the Belgian Army plate numbers.

The hull-mounted toolboxes common to Belgian Leopards are covered well in Both Sides in addition to the hull aspects shared with other Leopards.  There are also views of both sides of the upgraded ceramic side skirts.

The Rear Hull section examines all aspects of the rear of the tank and includes a look at the inside of the driver's toolbox and a thorough explanation of the engine deck fittings.

The rarely seen hull interior is fully exposed in A Look Inside with the ammunition racks, torsion bars, and other equipment in full view.

The distinctive armored sight housing is one of the several items specific to the 1A5(BE)shown in The Turret.  Also covered well is the extended bustle rack and the mast-mounted SABCA Cobelda wind sensor.  Like the German 1A5, the height of the new sight unit leads to an extension of the commander's TRP 2A and forward-facing periscope.

Inside the Turret is a glimpse at all the equipment used by the commander, loader, and gunner that is crammed inside the turret including the main gun, sights, radio, and hatch controls.

During the life span of the Belgian Leopard 1A5(BE) there were a few exceptions to the standard fleet and these are shown in the Oddities section.

One of the best-looking Belgian Leopards that never entered service is the upgrade prototypes seen in MEXAS.  The test MEXAS fittings displayed here in conjunction with the 1A5 sight housing and the upgraded side skirts make for a very impressive-looking tank.  There is enough detail here if one desired to combine the Legend Belgian 1A5 conversion with one of the MEXAS armored kits or conversions.

Driver Trainer is a section that is more appealing since Leopard Workshop came out with a conversion set for Leopard Driver Trainer tanks and all the detail needed is here.  Full coverage of the training cab interior.

Another plus for the Leopard 1 enthusiast is the Engine Bay and Powerpack.  Here we have the views of the powerpack in situ, being extracted, from many angles, and the engine bay with all the parts that don't come out with the powerpack.

In Preservation presents the Belgian Leopard 1A5s that are in place as monuments or exhibits and some of the ones still running like those at the Gunfire museum at Brasschaat, Belgium.  Also included are some of the surviving instruction turrets.  More detail on the disposition of the 1A5 (BE)'s is in the back of the book.

A bonus is the 1:35 Comparison line drawings that show the differences between the Leopard 1A5(BE) tank in service vs. the addition of the MEXAS armor.  Very useful if one desires scratch building the turret armor pieces.

Fantastic book to round off the coverage of the Belgian Leopard 1A5.  It served well in the Belgian Army and it's great to see coverage of the last version with all the changes.  Details of the driver training tank are very useful now that we have a kit on the market to model this.  Even though it never entered service, the details of the MEXAS armor testing are a great addition as the Leopard 1A5 looked impressive with the add-on turret armor. 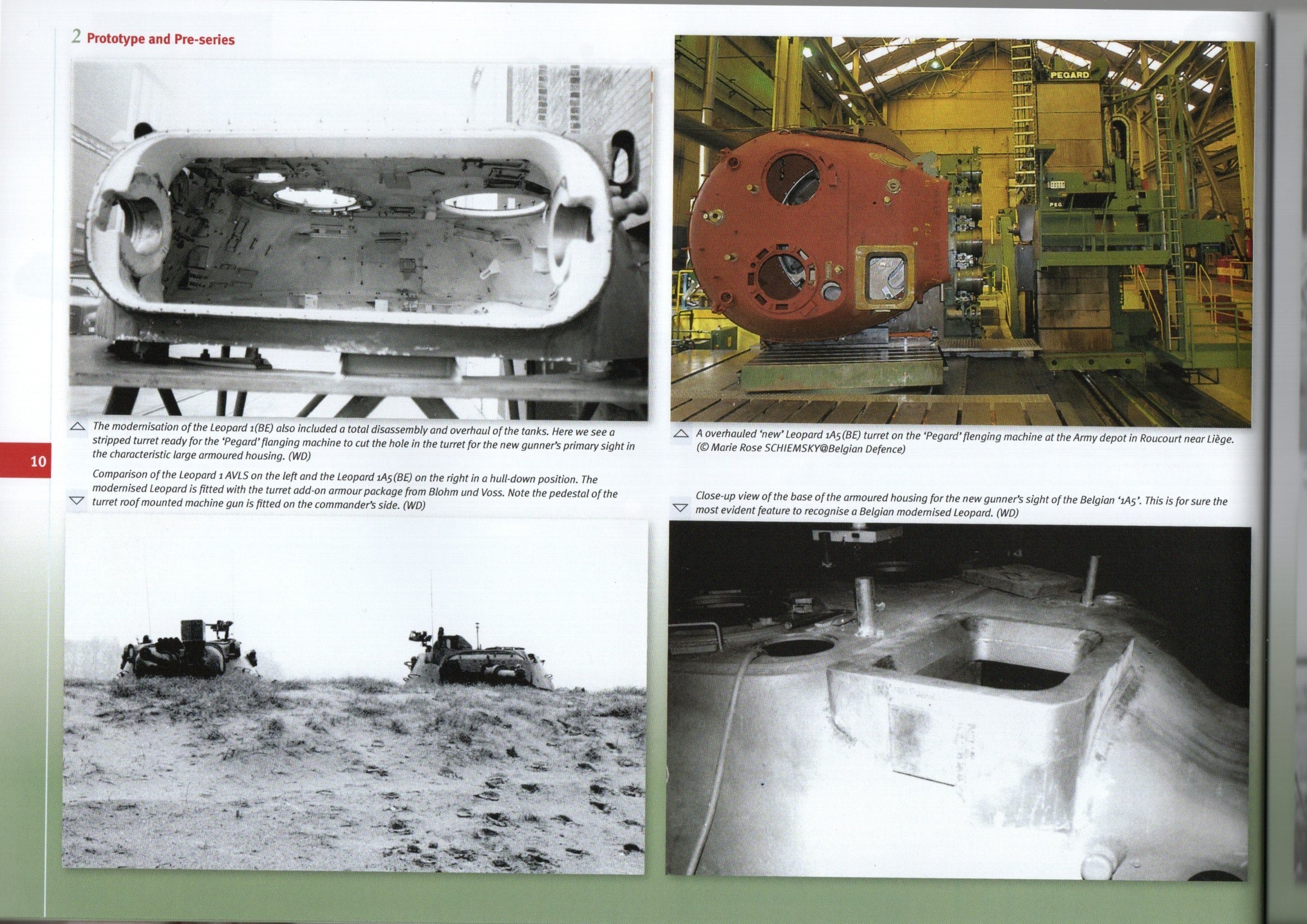 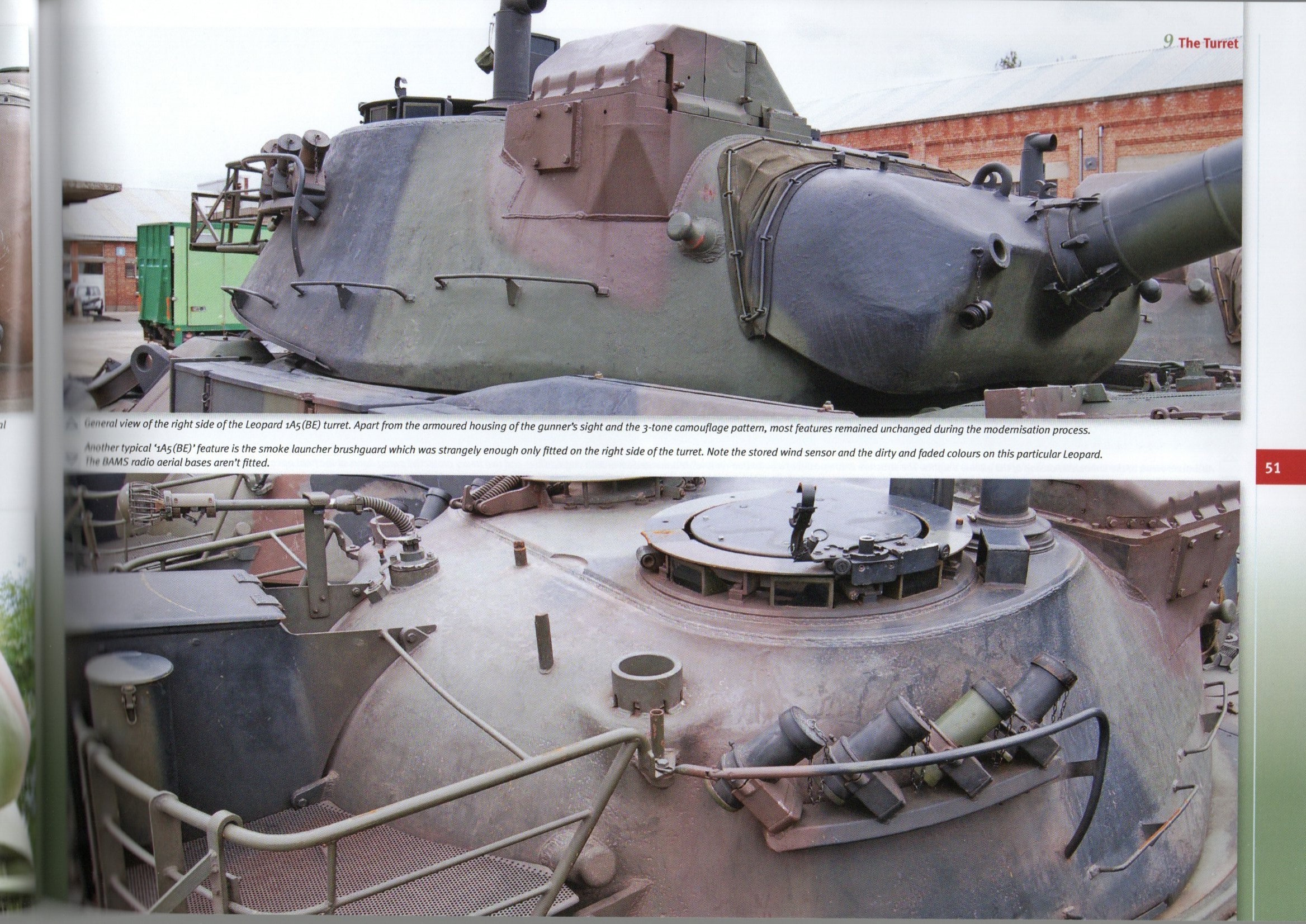 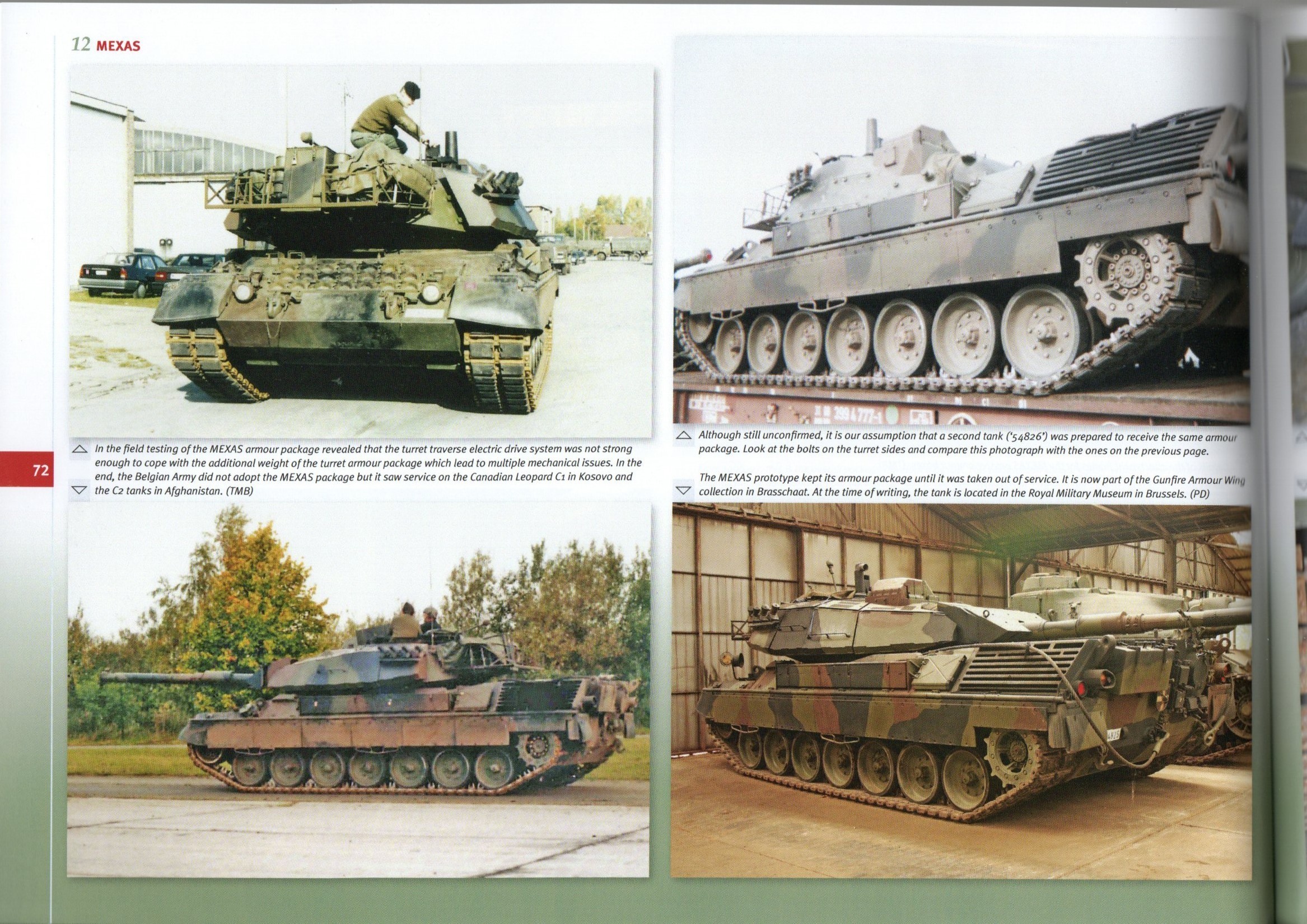 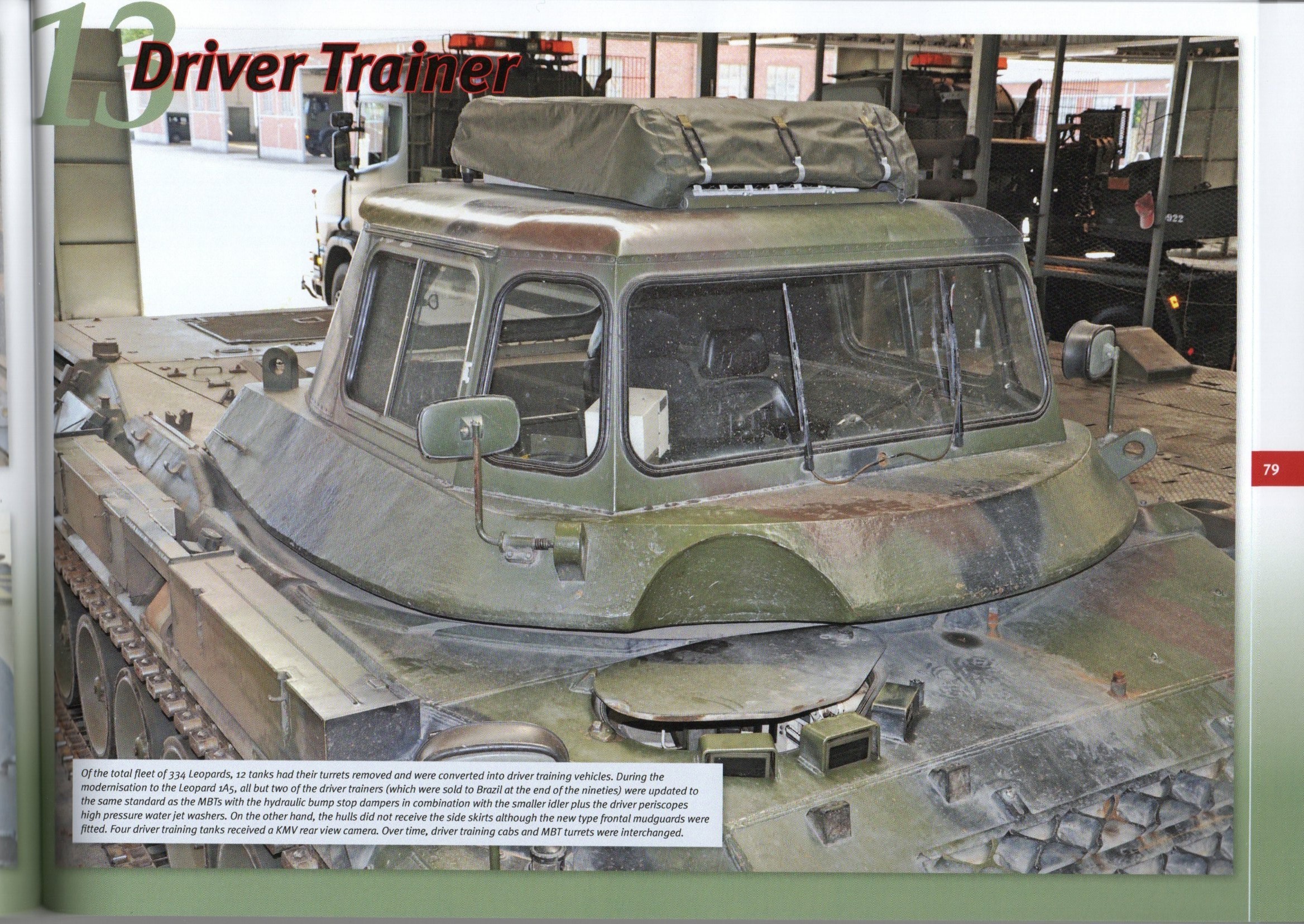 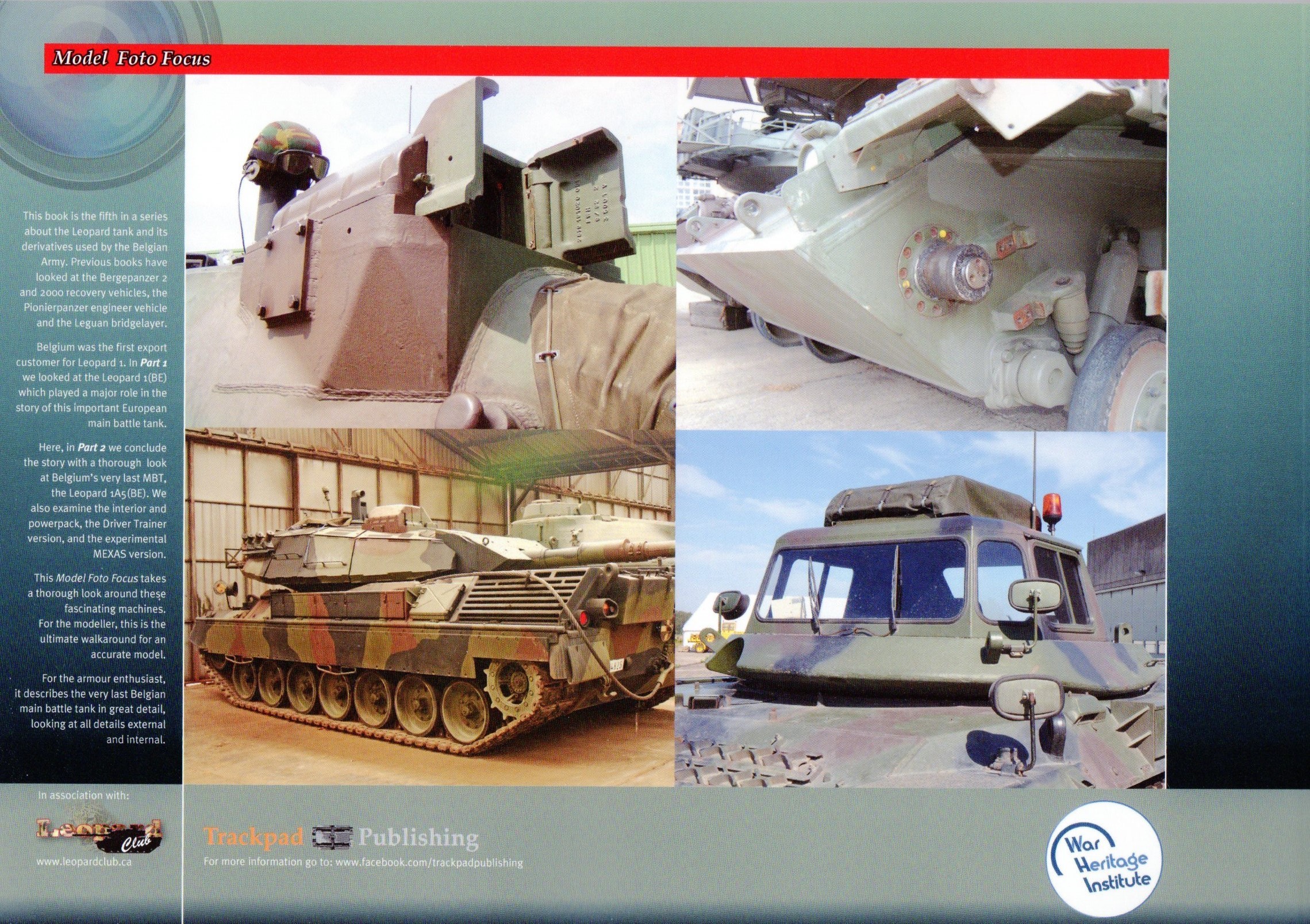