In Review: Italienfeldzug: German Tanks and Vehicles 1943 – 1945, The German ground forces in the Italian Campaign Volume 2

Georg Eyerman
posted on 9 months ago — updated on 6 months ago
2,067
views
Book review of "Italienfeldzug: German Tanks and Vehicles 1943 – 1945, The German ground forces in the Italian Campaign Volume 2" 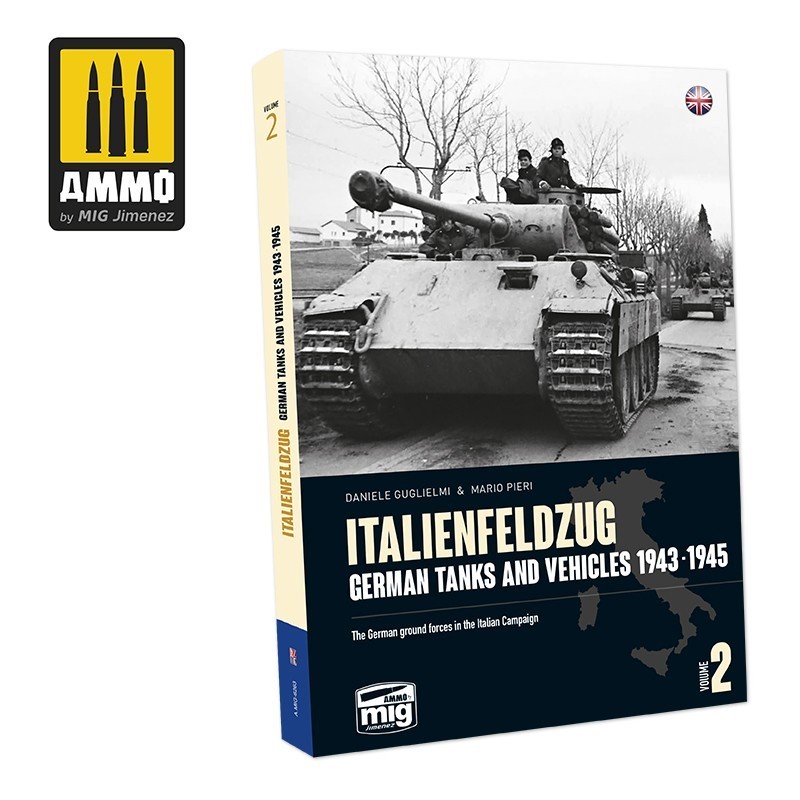 BookReview by Georg Eyerman (aka The Great Pumpkin)

What? Italienfeldzug: German Tanks and Vehicles 1943 – 1945, The German ground forces in the Italian Campaign Volume 2

Who?  Written by Daniele Guglielmi & MarioPieri, published by Ammo by Mig Jiminez

A while ago I did the review of volume one of this series.  So, this review will be kind of laid out the same way. Here are the vital statistics: it is a hardbound volume with a nice, tight binding and is 247 pages long. There are 600 photos and 18 color profiles.  Like the previous volume, many of the photos are large and well-reproduced.  The text is easy to read and is not merely translated from Spanish to English through Google translate.  While there are a couple of errors, like the first volume, there is nothing egregious.

The book is broken up into eight chapters: Preface/Introduction, Panther tanks, Marder II and III tank destroyers, Grille self-propelled howitzers, Field and Heavy Artillery, Towed Anti-tank Artillery, Color Profiles and acknowledgements/Thanks/Bibliography.  This was truly arranged as a “Volume 2” as the first chapter is labeled “7.”  A nice, subtle touch implying that the volumes are designed to work in concert with one another.  Unlike the last volume, there is no overview of the Italian Campaign and instead the authors jump directly into the vehicles used by the Germans.  While this book does not use “QR” codes to show a “Then and Now” perspective of the locations in the photos, it does include small maps with the locations of the photos.  To the author’s credit, the maps and photos are cross-referenced for ease of locating them.

Like the previous volume, where the Tiger tanks were the stars of the show, this time it’s the Panthers that get the lion’s share of this book.  106 pages are devoted to them, so just under half of the book is Panther pictures.  There is a decent mix of German “in action” shots and Allied “after action” and souvenir photos.  Both from still photography and a grabs from newsreel footage are used.  I found a couple of shots from other sequences that I had not seen before.  While there are some “old friends” they are almost universally large and well-reproduced. There are even a couple of contemporary pictures in color that give a pretty good impression of exactly what German Dark Yellow actually looked like at that point in the war.  Also included in this section is the organization table of I abt. / Panzer Regiment 4, who manned many of the Panthers in-theater.  The table concentrates a sizable amount of information in a small space which is very useful to modelers.

I have a soft spot of German light AFV’s.  Marder tank destroyers certainly fit this bill.  Chapter 8 is well-apportioned of pictures of both Marder II’s and III’s.  Like the Panther section, there is a good mix of German and Allied photos.  Unlike their heavier brethren, when a Marder took a hit from anything substantial, there wasn’t much left, so many of the knocked out vehicles have a pureed/shredded look to them.  Organizational tables, tactical and personal markings are also included, in both the photos and color inserts to further tell the story.  The end of the chapter includes a listing of units who had Marders assigned to them during the campaign.

Chapter nine is dedicated to the heavy-hitters of the infantry regiments: the 15 cm Grille vehicles.  This chapter is pretty much set up like the others, including a variety of photos, many of which I had not seen before, a listing of units with Grilles assigned to them and several color inserts of colored markings seen on these vehicles. As there weren’t very many of these in service at any one time, this chapter is regrettably short.

Now, I’m not an artillery guy.  But the thought of mounting the equivalent of naval ordnance on a train has a certain je n’ai sais quoi.  Chapter 10 covers everything from the diminutive 7.5 cm infantry guns to the monster 11 inch Anzio Annie and just about everything in between.  Of particular interest are a set of photos of the 7.5 and 10.5 cm Leichtgeshutz 40, the recoilless guns used by the Fallschrimjagers. Also of note is a small group of photos of a captured French Canon de 194 mm GPF gun.  Of course there are a lot of pictures of the rail guns!  Both the German manufactured “Leopold” and “Robert” and the French guns that the Germans deployed (32 cm K(E) 651(f)) are given photo coverage.  The format of covering both German “in action” photos and Allied “after the battle” is the same as the other chapters.  There is a handy listing using contemporary documents showing the artillery strength of the 14th German Army and the XIV Pz. Korps.

Chapter 11 covers towed anti-tank weapons.  Again, there are some rarely seen items, like the Raketenwerfer 43 rocket anti-tank gun, the 2.8 cm schwere Pasnzerbüsche 41 (sPzB 41) and the 4.2 cm Pak 41(both of these were squeeze-bore guns).  In addition, there is the usual profusion of Pak 38’s,  40’s and 43’s.  Formatting is the same, and there is a contemporary document to showing the TO&E (table of organization and equipment) of a non-armored Panzerjager battalion.

From page 236 – 246 are the color plates.  Like the text/photo sections, they focus primarily on the Panthers. Most of them are I./Pz. Rgt 4 vehicles, but there is a lone I./Pz. Rgt26 tank thrown in for good measure.  1 Marder II and 2 Marder III profiles are included, along with 3 Grille Ausf H’s.  The last page of the color plate section has a Nebelwerfer and a Pak 40. Page 247 contains the acknowledgements, thanks and documentary source abbreviations.

The campaign in Italy wasn’t “the soft underbelly” of the Axis, but a tough slog up the peninsula for both sides.  Lacking the dramatic advances and tank battles of either the Eastern Front or Northwest Europe, it tends to get overlooked.  But these two volumes fill the gap rather nicely.  I really enjoyed this volume, as I am not a huge Tiger fan, The 15 cm Grille coverage is regrettably short, which is a shame but hardly surprising as these were rare vehicles even when they were in production. Not to gush, but these two volumes are good value for the money and would make for a good foundation for an enthusiast’s library on the campaign.

PS-full disclosure, I do occasionally do work for Ammo of Mig doing English/English translations and minor editorial work for pay and product.  This particular book was not involved in that agreement. 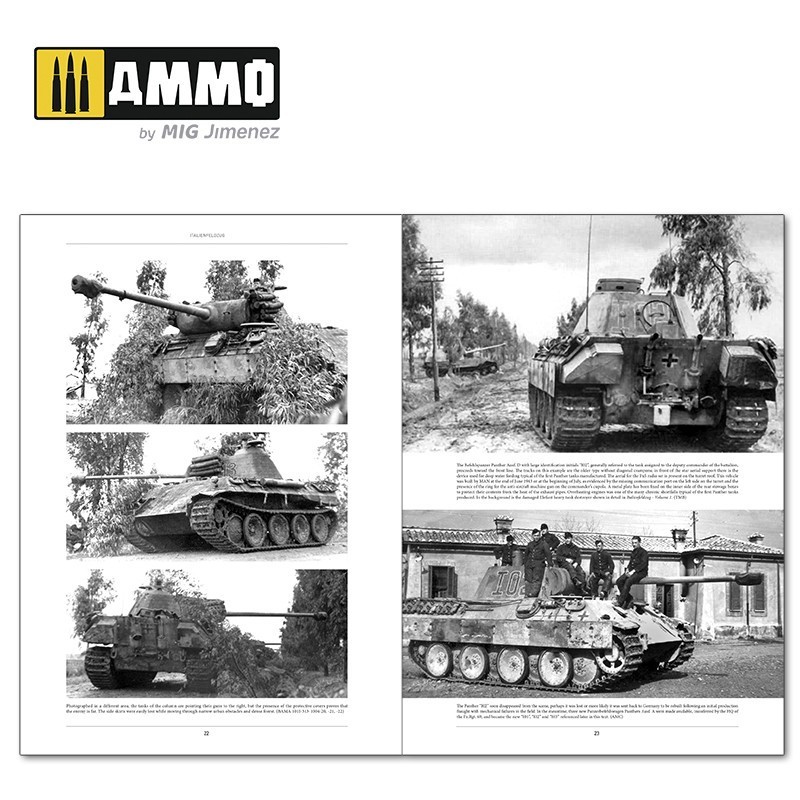 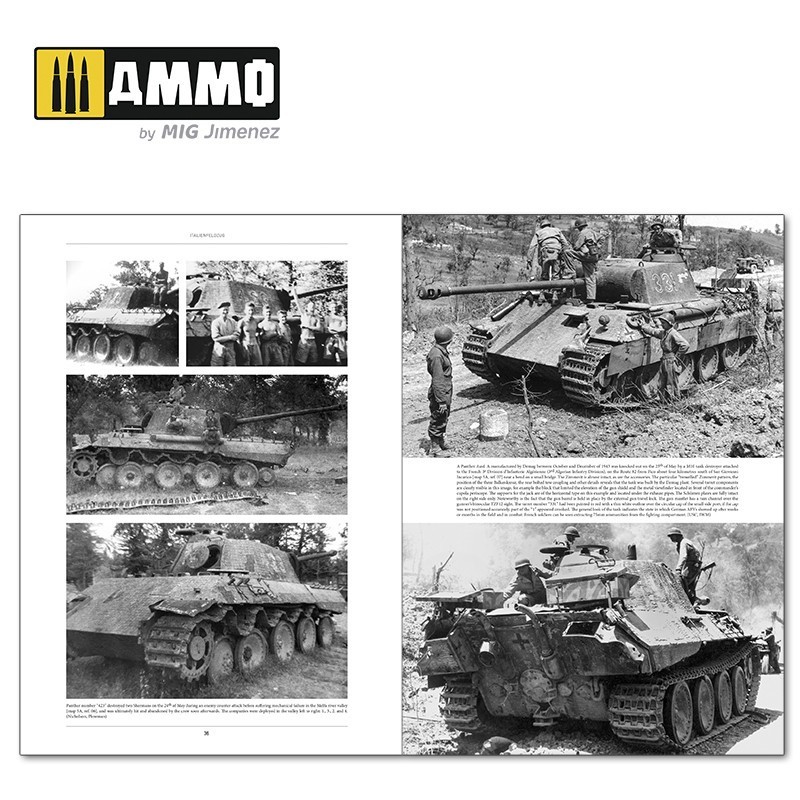 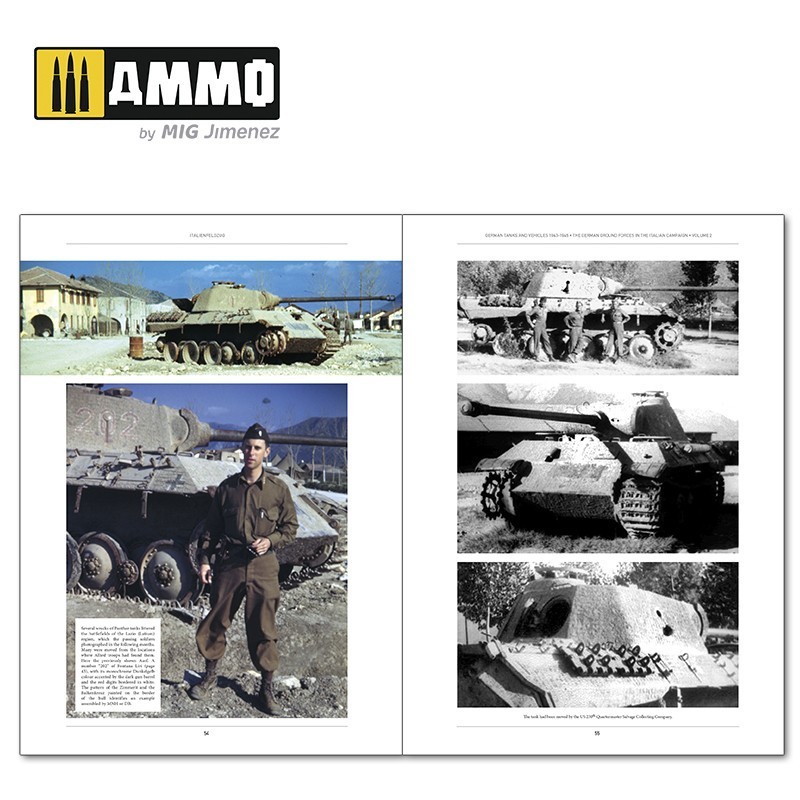 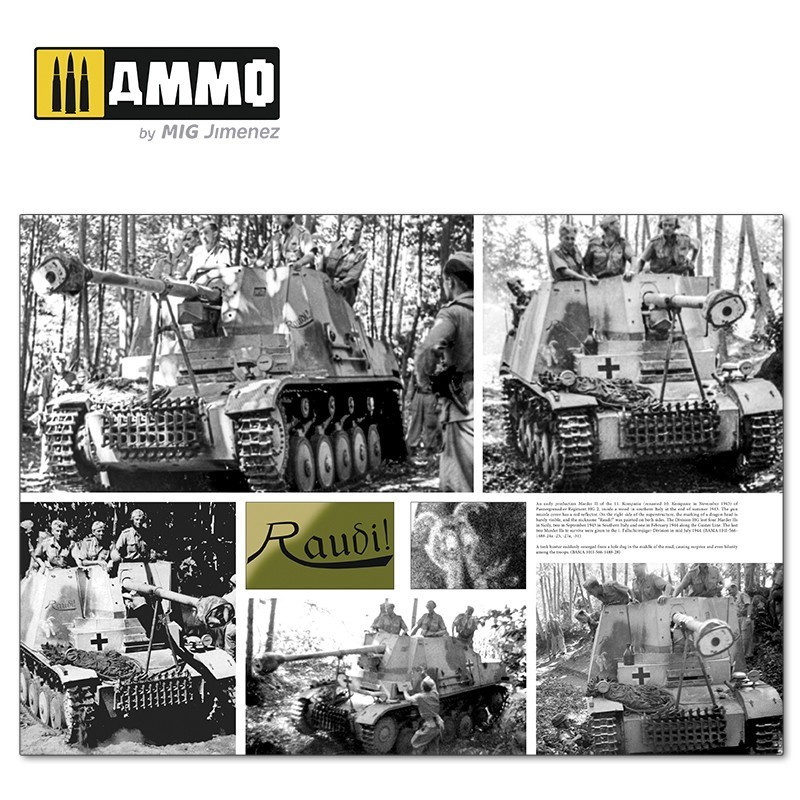 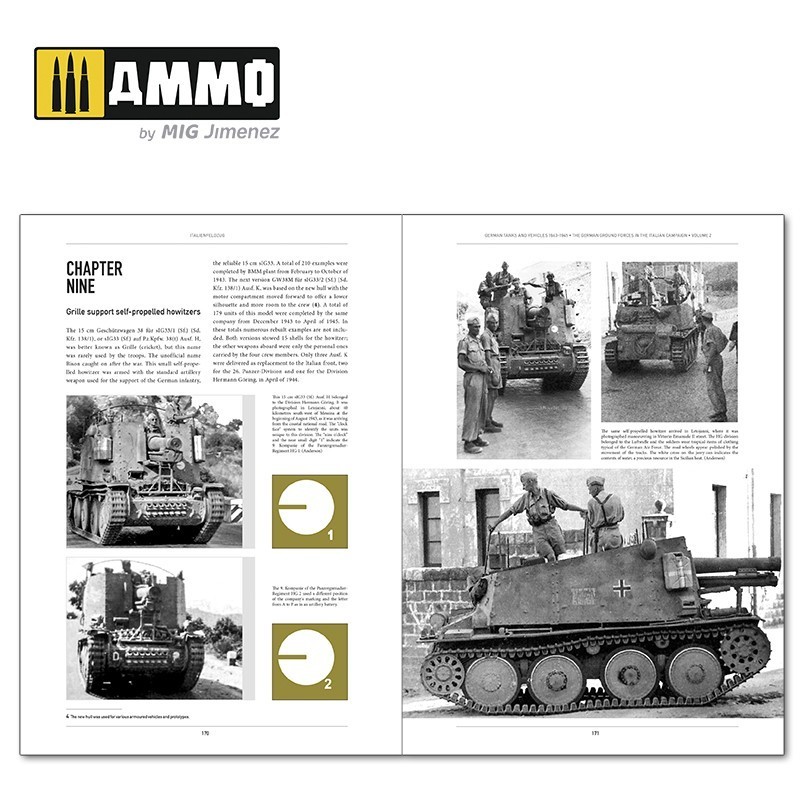 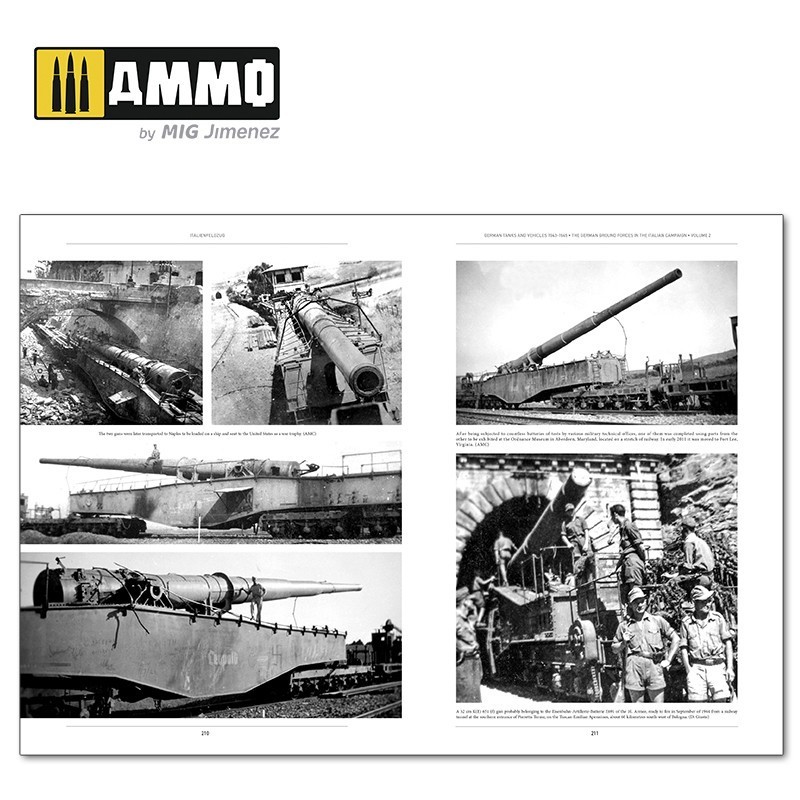 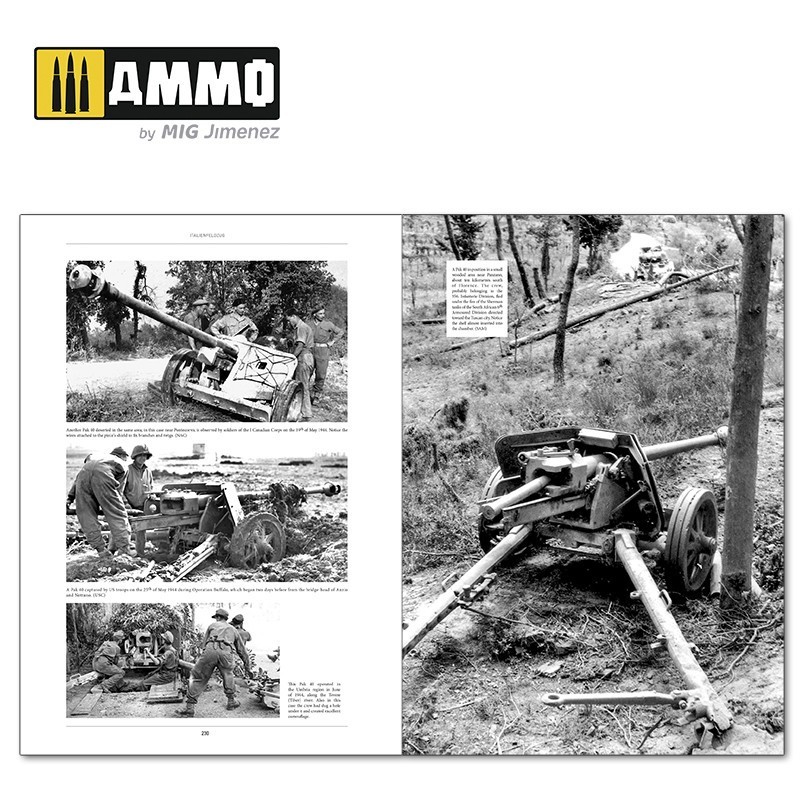 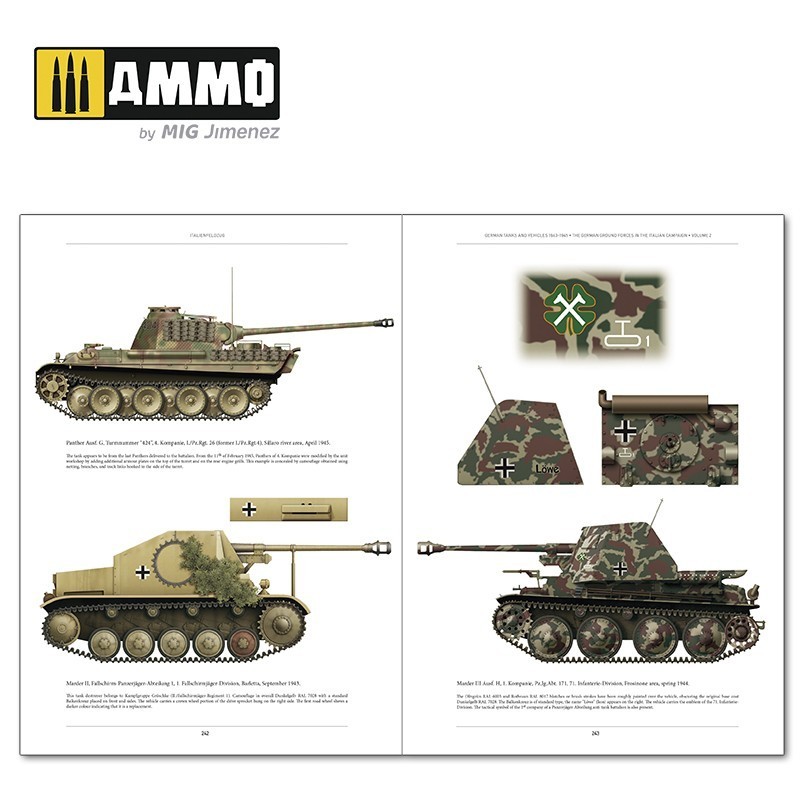