Georg Eyerman
posted on 2 years ago — updated on 1 year ago
2,827
views
A book review by Georg Eyerman (aka The Great Pumpkin). 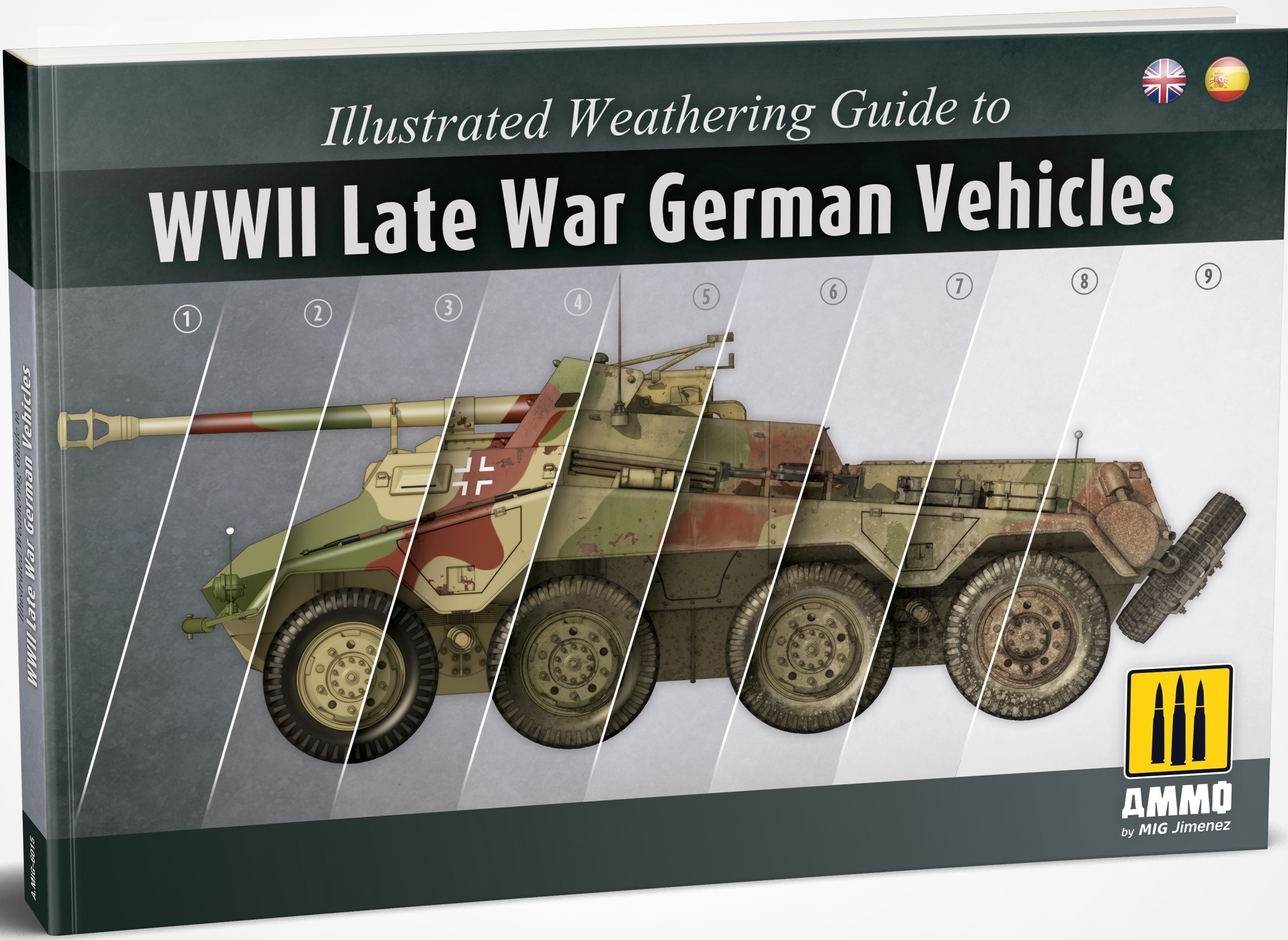 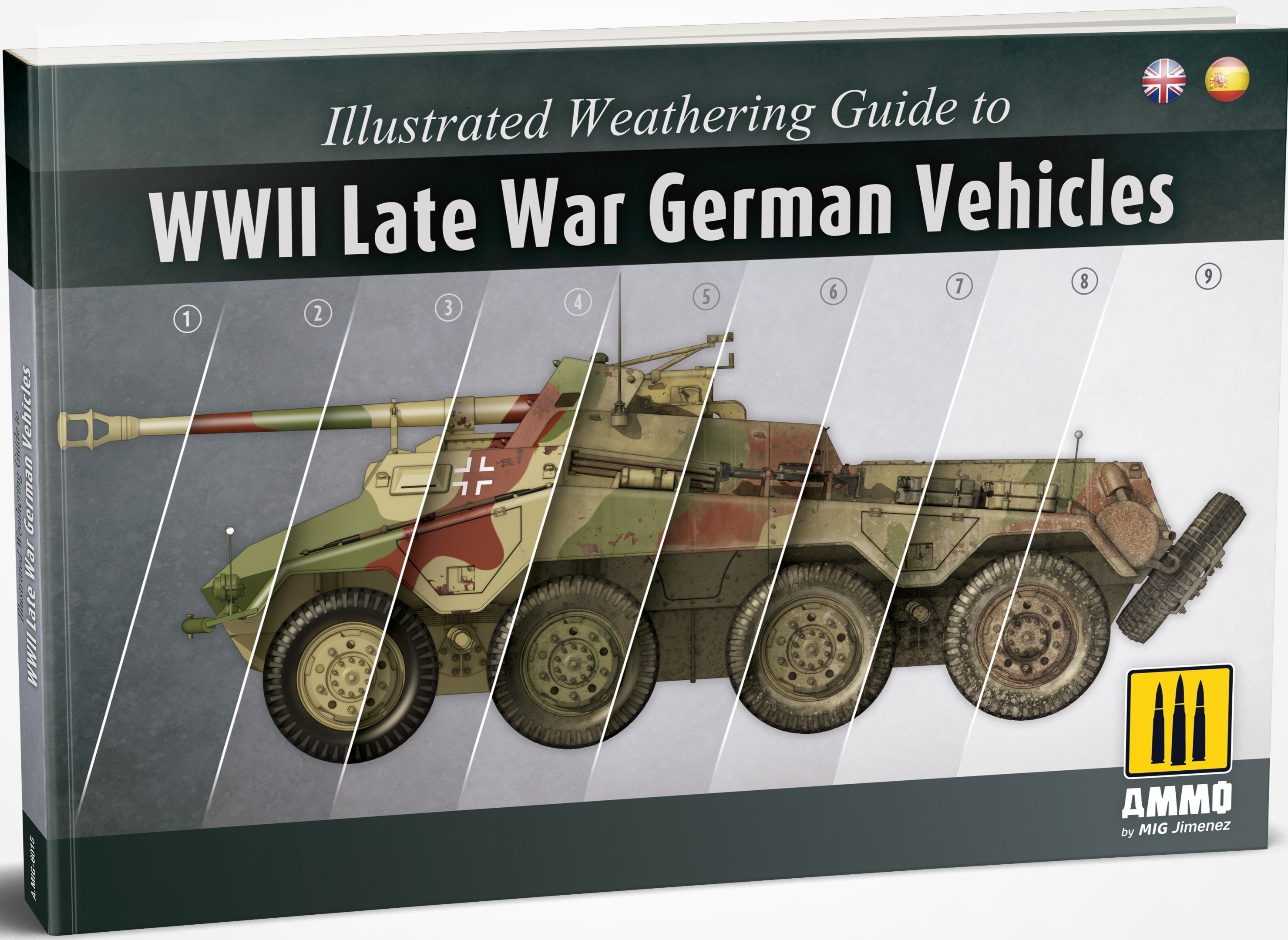 Well, I’m back for another book review!  This time, I’ll be reviewing "The Illustrated Weathering Guide to WWII Late War German Vehicles” from AMMO by Mig Jimenez.  As opposed to my last title that I reviewed, this more of a picture/workshop volume, with a ring-style binding allowing the book to lay completely flat when opened.  The book is 232 pages long and uses a sideways legal format which is to say that it is bound on the 8 ½ inch side and being about 14 inches wide.  The pages are heavy duty smooth semi-gloss paper with minimal glare.  The cover actually covers the ring binding, preventing damage to the rings and pages. This is quite well thought-out. Bravo MIG! 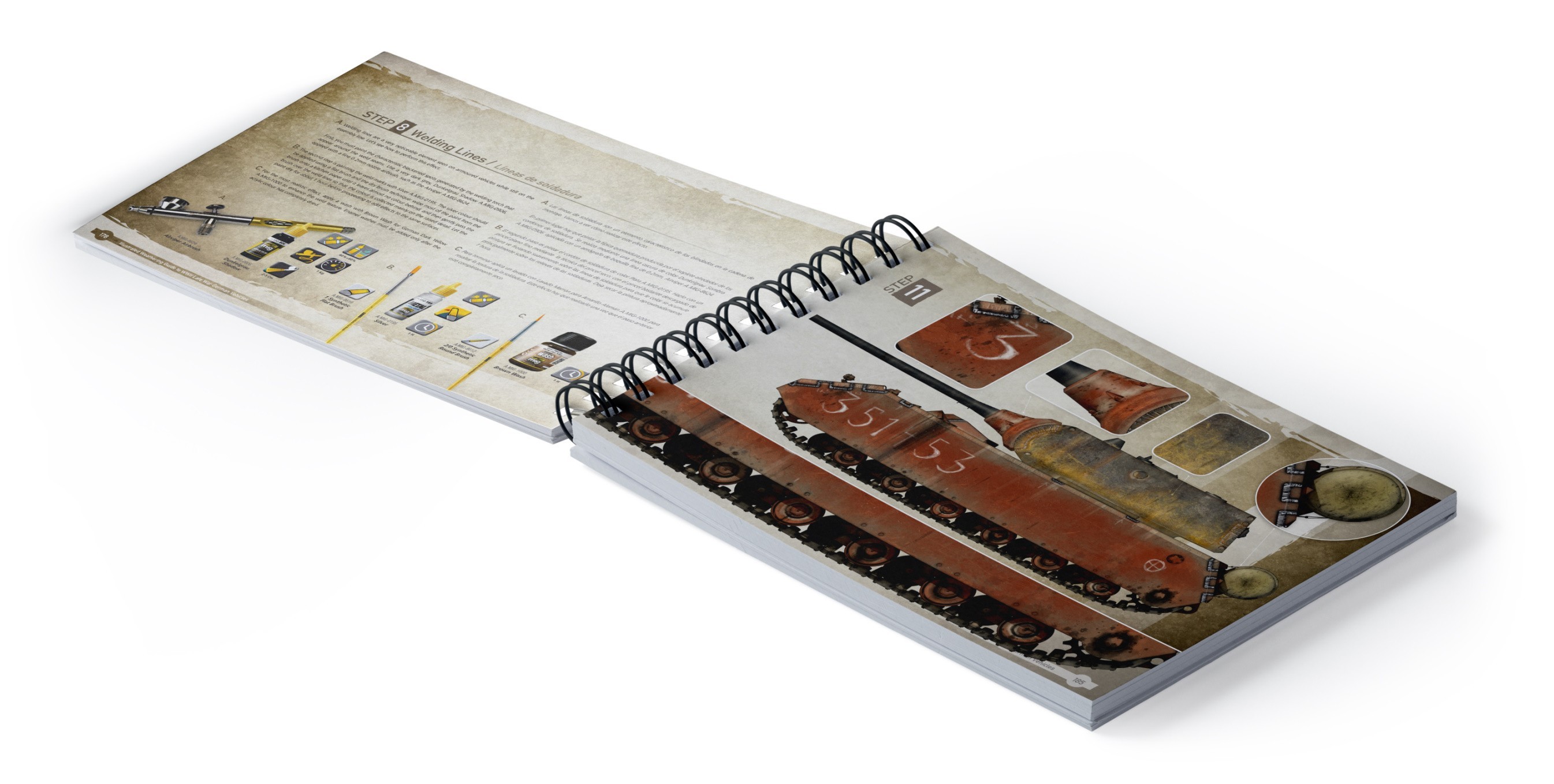 The book comprises an introduction, 9 chapters and 10 vehicles.  Each vehicle gets its own chapter.  Yes you’re reading that right.  No, my public school education mathematics hasn’t failed me. In a very cool blend of the real and virtual, the last chapter is dedicated to a late production Panzer IV ausf H. However, it’s virtual!  The contents page includes a QR code that works with a smart phone to open a link to allow you to read the section.  I hope that this is the way of the future as it will allow for added content of books without the need to print extra pages. Again, bravo!  Very cool!

The introduction is pretty extensive out of necessity, as it explains the basic theory, techniques, products and tools used, and pictograms used in the book. All the materials and tools are, by design, AMMO of MIG products and this is sort of expected, given who the publisher is.  The following 9 chapters cover the following vehicles:

Each chapter is pretty much laid out the same way, with a short explanation of the particular vehicle and then a progressive set of drawings of the vehicle as it would appear with each weathering step; which I think is a good idea, giving a road map of the steps to go from base-coat to completion.  I am going to voice two gripes at this point.  First, there is no contemporary reference picture(s) included of the vehicle in question.  For me, this raises the question of authenticity of the paint scheme being displayed.  With the exception of the Maus, I probably have seen at least one photo of each vehicle, but a photo, or selection of inspirational ones, would have been nice. Second, is that the illustrations are not actual models, but drawings.  The ideas presented are good, but I will insert the caveat, “your mileage may vary.”  There are things you can do on paper, or effects that are possible, that simply don’t work or can’t be achieved in the real world.  I will let you make the judgment here.  Each step is a two page affair, with the technique explained, materials and pictograms on the left-hand page and the associated illustrations on the right.  As such, the illustrations are large and well-detailed.

Also included are close-ups of items that may be lost on the large pictures.  It does not show “in-progress” illustrations(i.e. the model being masked with putty to do the camo scheme), just the completed step.  There are some before and after illustrations when it is necessary to show the full effect of a particular technique.  Being that there are 10 vehicles, some of the techniques are repetitive.  After a couple of go-rounds, I just skimmed the repeated parts.  Honestly, this is the nature of the project, so I’m not going to ding the book, but merely call attention to the quirk of necessity.  I am happy to report that the text is easily readable and I do not recall any particularly egregious spelling/grammatical errors in the text.  As an aside, the book is written in both English and Spanish.  While I can vouch for the English side of things, I do not read or speak Spanish, so I can’t comment on that part of the book.

My only real beefs, and this is a personal thing, are the use of chipping and the depiction of rust. These are the Germans, you know, the chemistry/engineering/science(albeit evil at the time) people?  I think they would have the whole paint chemistry thing down by then.  Chipping looks great on a model, but how realistic is it?  Dirty, grimy, sure.  Chipped or rusted up?  Not so much. These vehicles were probably in service no more than a couple of months (perhaps even weeks) before they ran out of fuel, broke down, were sabotaged by their crews or destroyed in combat.  But that’s my soap-box issue.

To conclude, this book is not only great eye-candy; but a handy technique reference as well (and well suited for the workshop, too).  As a modeler of 30+year’s experience, I picked up a couple of ideas and techniques that I either didn’t know about or saw applied in a new way. I am more of a “dirt, dust and grime,” modeler as opposed to chipping and rust, but I did see applications of this as well for future projects.  I am also very grateful only one vehicle, the Maus, was done up in the red primer that seems to be in vogue these days.  While the rest of the vehicles sport camouflaged paint schemes, it would have been nice to see one in dark yellow.  The inclusion of a vehicle in winter whitewash was nice.  Did I enjoy this book?  I respond a solid, “Yes.”  I’d recommend this book to anyone doing German armor, either new to the hobby, more experienced or getting back into it.

PS-full disclosure, I do occasionally do work for Ammo of Mig doing English/English translations and minor editorial work for pay and product.  This particular book was not involved in that agreement.