For King and Kaiser 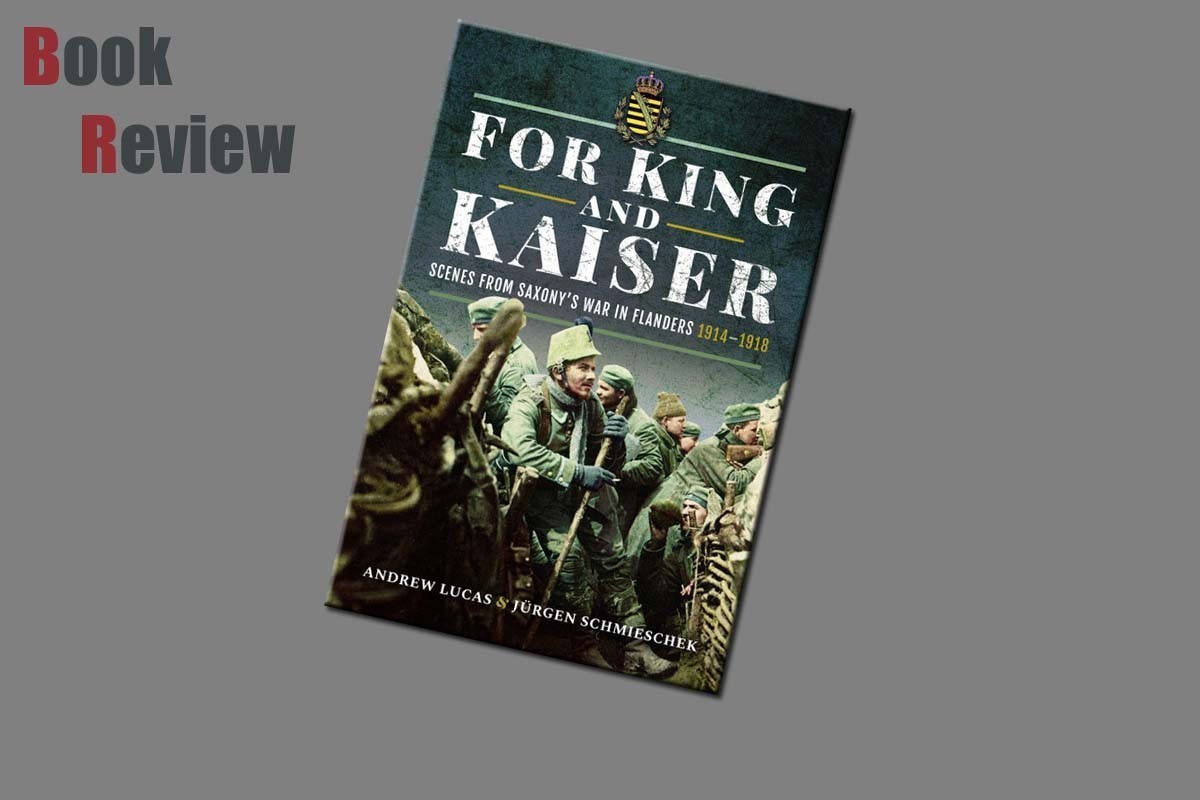 Following on from their pioneering account of the Saxon army in the First World War –Fighting the Kaiser’s War – Andrew Lucas and Jürgen Schmieschek have compiled this remarkable sequel which covers Saxony’s war in Flanders in much greater detail. Once again they draw on vivid extracts from personal accounts and letters as well as regimental and documents from the Saxon archives, and they illustrate their powerful study with hundreds of previously unpublished personal photos which show every aspect of wartime experience in the front line and the rear areas.

The role of the Saxon army in the three battles of Ypres is recorded in graphic detail, and rare photographs offer fresh perspectives on famous wartime locations on the Western Front including Ploegsteert Wood, the Menin Road, Bellewaarde, Wytschaete and Passchendaele. The historic photographs – and the insights provided by the accompanying text – give us a fascinating inside view of the Saxon soldiers and their relations with the local population who were obliged to host them.

The quality of the evocative personal material – text and images – collected by Andrew Lucas and Jürgen Schmieschek makes this exceptional work a major contribution to the literature on the German forces on the Western Front.

This offering from Pen and Sword and authored by Andrew Lucas and Jürgen Schmieschek is a hard backed book of good quality in my opinion. The contents are presented over 256 pages of semi gloss paper that I believe is stitched rather than glued in place. This offering is the second book covering the The Great War from these two authors and I am now considering obtaining the first release. The contents of this offering are presented as follows:

The beginning of trench warfare

The first battle of Ypres

The second battle of Ypres

The second battle of Ypres Pt2

In the rear of XXVII Reservekorps

The third battle of Ypres

Those who remained in Flanders

I believe that all those who fought during World War 1 have now passed and so making The Great War history rather than memory; however many of us will have been told bits and pieces of of events that took place during this war by Fathers, Grandfathers and Great Grandfathers. I was lucky in that I met all of these relations including Great Grandfathers who had fought in the Great War. I will be honest and say that I cannot remember them saying much about it but on occasion they would reminisce about the past and friends they lost. One of my Great Grandfathers was a drummer with an unknown regiment in Africa at the turn of the century aged 14 I believe, and I have many memories of visiting him every Sunday when staying with my Grandfather.

Why have I said all that? Well many of you reading this will not have had a living link to that war and so have a limited knowledge of it; this book will go some way in giving you a taste of just what this war was like for those that fought in it rather than directed it. This title also looks at the lives of those fighting from the German perspective, which being British I know very little about.

The text in the book would seem to mostly consist of snippets from the diaries of the combatants, and this is an aspect I highly approve of as no one can tell the story as well as the people who were there. With the content having been taken from many sources and put together very well by the authors in a readable manner and as a flowing contribution, the text changes from dry factual presentations by the individual concerned to witty contributions such as grabbing souvenirs under the context of doing an exchange and then not going back. The authors deserve praise for stringing such content together and making it both informative and entertaining.

The stars of this book for many will be the huge numbers of photographs taken from the German side and then displayed with information such as who, when and where if known and then goes onto provide background data to the photographs. A great number of these images are taken from private individuals who most likely were taking pictures when not allowed; also here are the official, staged and regimental shots that all have their place in this release.

I have really enjoyed this title as it bounces along at a pace and you find yourself wanting to go with it rather than being dragged. For those not into heavy reading this is an ideal offering covering the Great War as you read what you choose rather than every word as the writing style allows this without you feeling in the dark. The photographs will be the content that attracts most and I understand that, but I find myself drawn to the diary entries more and more as I progressed through the title. One word  of warning there are some disturbing images of death and destruction that may offend. This is a truly stunning book that provides everything I could want from such a title and more again.