JPTRR
Editor
posted on 8 months ago — updated on 8 months ago
1,917
views
Belgian Waffen-SS Legions & Brigades, 1941-1944, Wallonie, Wallonien, Flandern & Langemarck is a recent release by Osprey Publishing LTD. Unique photos and special artwork support the text of this 539th title in the Men-at-Arms series. 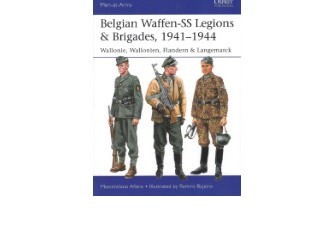 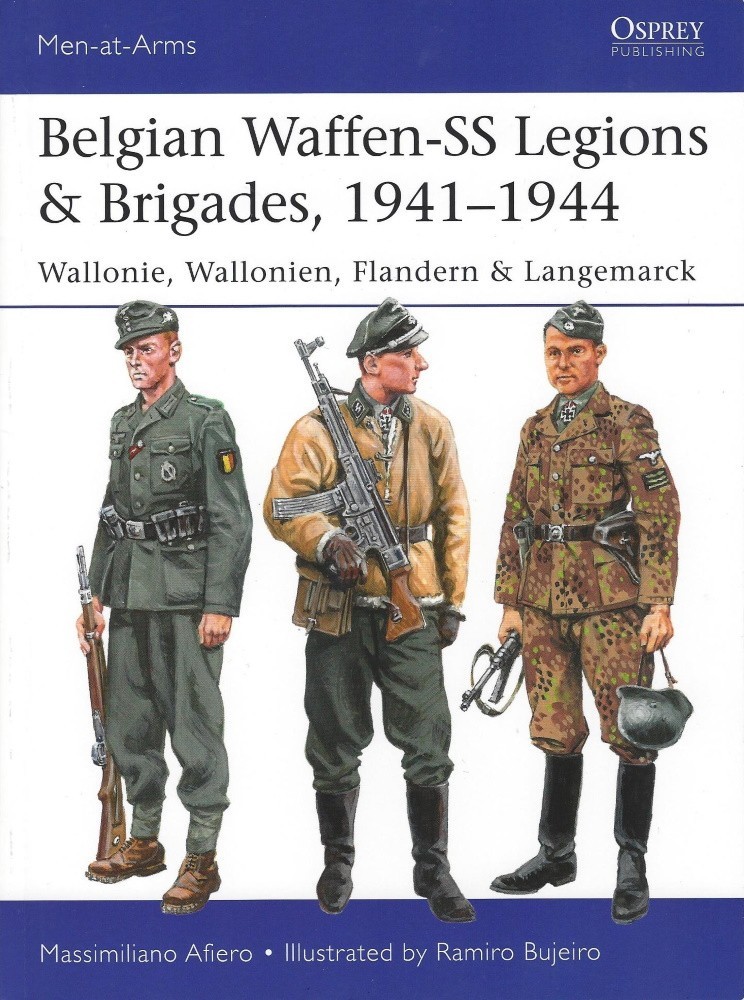 Nazi Germany attracted tens of thousands of volunteer soldiers from all across Europe, many joining the Waffen-SS, perhaps the first modern international army. Fighting against Bolshevism and Soviet Russia was a major reason, and volunteers from Belgian swore oaths to do so, winning accolades for their fighting prowess from Leningrad to the Caucasus.

Belgian Waffen-SS Legions & Brigades,1941-1944 Wallonie, Wallonien, Flandern & Langemarckis a recent release by Osprey Publishing LTD.  Authored by Massimiliano Afiero and illustrated by Ramiro Bujeiro, it is the 539th title in the Men-at-Arms series.  This 48-page book is available in softcover, PDF and eBook formats, and catalogued with the Osprey short code MAA539, and ISBN 9781472844316.

From the German occupation of Belgium in May 1940, Flemish recruits from northern Belgium - considered by the Nazis to be 'Germanic' - were accepted individually into Waffen-SS units.  From Hitler's invasion of the USSR in June 1941, additional recruits from the French-speaking south (Wallonia) were drafted. Both communities formed volunteer 'Legions', to fight (according to Goebbels' propaganda machine) 'for European civilization against the Bolshevik threat'; these were a Flemish Legion in the Waffen-SS and a Walloon Legion in the German Army. Both served on the Russian Front in 1942-43; the Walloon Legion was then also transferred into the Waffen-SS, and the decorated Walloon officer Leon Degrelle became a publicized 'poster boy' for foreign SS volunteers. Both Legions were then redesignated as SS Assault Brigades, and thereafter saw extremely hard fighting in the Ukraine and on the Baltic front. In autumn 1944, their survivors were withdrawn from the front and incorporated into two new understrength SS Divisions, 27. 'Langemarck' and 28. 'Wallonien'.

This new account, featuring detailed colour plates of uniform and insignia, recounts the battle history of the French and Flemish-speaking Belgian SS, up to their final transformation into full divisions in the winter of 1944/45. –Osprey Publishing

This book presents a concise history of volunteers from Belgium, and their service on the Russian Front. It includes an overview of their background, recruitment, training, organization, commanders and leaders, and combat histories. The book also features 30 original color illustrations of uniforms, insignia, flags and kit.

Belgian Waffen-SS Legions & Brigades, 1941-1944 is told through eight chapters and sub-sections including the index:

- The end in the Caucasus,  September-October 1942

- The Estonian front: the Tannenbergstellung, July-August 1944

The book starts out describing the demographics of Belgium at the lead up to World War II and the factions that ultimately volunteered to fight for Germany.  It's interesting that of the two main groups - Flemish and Wolloons - the SS initially rejected Wallonian volunteers as non-Germanic, although they were allowed to form and fight as a volunteer unit with the Heer.  Each of the four formations are presented in detail of their formation and combat history.  Items of interest, such as the 'Trifos' insignia and special sleeve badges and bands, are described.   Belgian Freiwilligen (volunteers) were eventually designated SS and the book touches upon the different status assigned to foreign volunteers, such as some being designated "Waffen" while others were proceeded with "SS".

Each Belgian Freiwilligen formation achieved such combat results that Germany continued to expand the formations, and recruit more.  Several key individuals are profiled and followed through the text.  A few of the soldiers who performed extraordinary feats are presented, as well.

Belgian volunteers went into action at Leningrad in 1942, and fought until the end of the war. This book examines their deployments and combat engagements, and the various parent units to which they were attached.  Text includes narratives of battles, including which companies attacked or defended objectives, including whether or how often the fighting was hand to hand.  Most engagements were rarely larger than multi-company size.  A couple of individual combat stories are recounted, such as the Belgian volunteer sole survivor of his anti-tank gun crew who engaged and knocked out multiple Soviet tanks overrunning his position.  Casualty figures are presented, and the history of units being withdrawn and sent back to occupied Europe for reorganization and retraining are covered. Interestingly, Belgian volunteer legions swore an oath to Adolf Hitler, although with a specific qualifier.

Most pages have photographs or graphics to enhance the text.  Good, useful images.  Some images of forces in the field are well composed and developed, while others are obviously shot under less-than-ideal circumstances.   Photos identify the myriad of uniforms in insignia changes.  National shields were revised at times, and for a time one of the units wore the edelweiss of the Gebirgsjäger, although later in the war the edelweiss mostly disappeared.  Modelers should find some good source material to detail their models and inspire dioramas.  My only complaint is that the photos are small.

H7: One of several designs of Flemish-made national sleeve shield worn by SS-Frw Legion Flandern, varying slightly in details; these were sometimes retained by veterans serving in SS-Frw Sturmbrigade 'Langemarck'.

Each of those plates are described with detailed commentaries that should be valuable to modelers.

Several black and white maps were drawn for the book and display basic contours of lakes, roads and towns, including arrows indicating route marches and attack areas, plus labeling units. 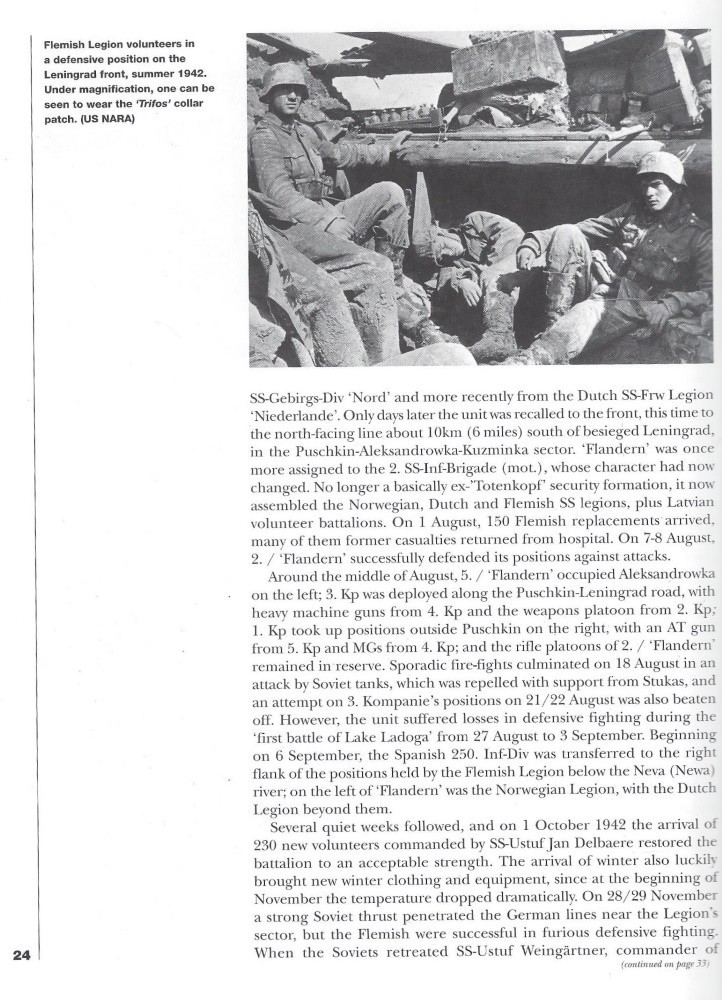 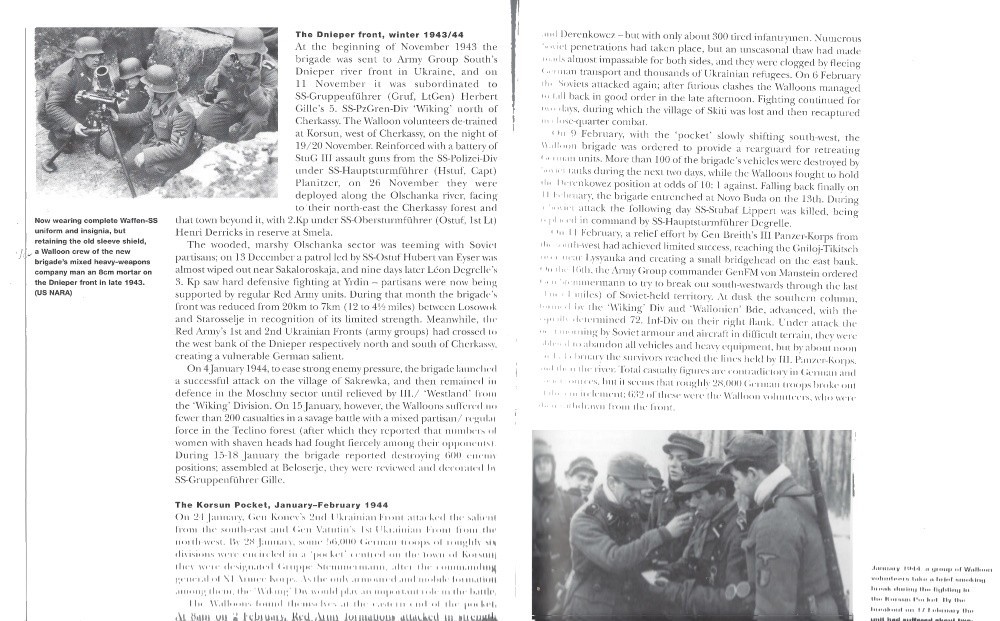 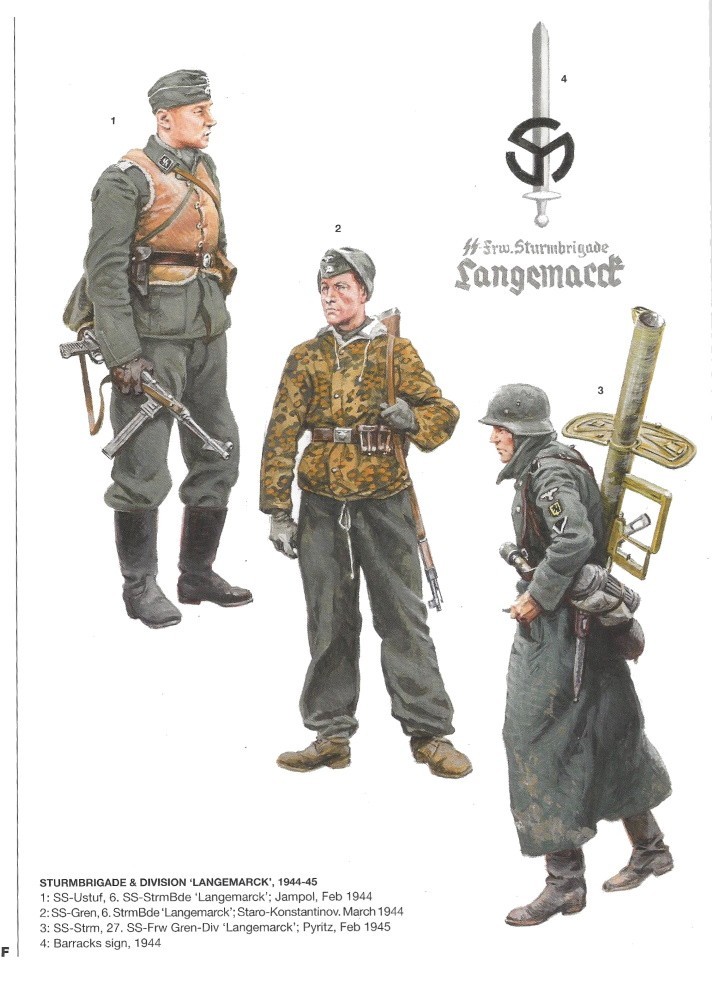 Belgian Waffen-SS Legions & Brigades,1941-1944, Wallonie, Wallonien, Flandern & Langemarck is an interesting subject for people who want to see more than traditional Wehrmacht subjects.  The text is detailed within the constraint of 48 pages.  Photographic and illustration support enhances the text and commentaries enhance those images.

My only complaint is the size of most of the photos although this is forgivable considering the size of the book.  For my money, Osprey has released yet another worthwhile book that expands our knowledge of the Wehrmacht and its allies.  Recommended.