JPTRR
Editor
posted on 2 years ago — updated on 2 years ago
2,553
views
This book from Osprey Publishing tells the saga of the Red Army fight to take back the important city of Velikiye Luki. The story includes street fighting, panzer charges, and glider operations, fought concurrent with the Battle of Stalingrad. 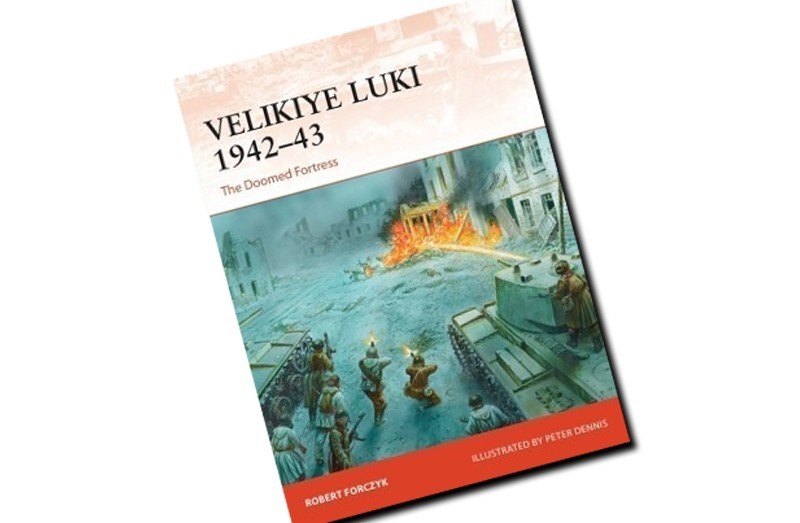 Velikiye Luki 1942-43 The Doomed Fortress, is a recent title from Osprey Publishing LTD. It is the 351st title in their series Campaign.  When I saw the title, I was carried back to my Avalon Hill Squad Leader days, and had to read this book.

The book contains 96 pages and is available in softcover, PDF, and ePub formats.  Authored by Robert Forczyk and illustrated by Peter Dennis, the title is catalogued with Osprey's short code CAM 351 and as ISBN 9781472830692.

Velikiye Luki had been an important Russian fortress city since the 13th century and had become an important rail-hub by the 19th century. In August 1941, the Germans occupied the city of 30,000 during Operation Barbarossa and made it a bulwark on the boundary between Heeresgruppe Nord and Heeresgruppe Mitte. In the winter of 1942-43, while Soviet forces were encircling Stalingrad, the Stavka (High Command) conducted a simultaneous offensive to isolate and destroy the 7,500-man German garrison in Velikiye Luki. After surrounding the city on 27 November 1942, the Soviet 3rd Shock Army gradually reduced the city to rubble, while the German garrison, sustained by Luftwaffe air lifts, hunkered down in the medieval city and awaited rescue.

This illustrated title reveals the full story of the tense seven-week siege of Velikiye Luki, which saw Soviet forces striving to liberate the city in the face of a determined garrison and fierce relief efforts. Detailed analysis by renowned World War II historian Robert Forczyk is complimented by stunning and historically accurate battlescenes, maps, and bird's-eye-views to offer a comprehensive look at this gripping campaign.

Velikiye Luki 1942-43 The Doomed Fortress is organized  and presented in the standard Campaign series format through eight chapters in 96 pages :

Origins of the campaign

The book opens with a brief history lesson about Velikiye Luki and how it became so important to both the Germans and Russians.  Five pages provide brief intel on the main Soviet and German generals who waged the campaign, including their strengths and frustrations.  Next, Opposing Forces examines the units and formations that fought the battle, discusses equipment and weapons, and logistics.  Interesting tidbits are included such as the lack of adequate clothing for the Red Army forces, something I never expected to read about.  Modelers may be surprised and inspired by the types of tanks deployed by the Soviets, and armor enthusiasts may be amazed by their rate of serviceability and the German's ability to fight them.  Velikiye Luki was fought when short-barreled Panzers and light Paks (anti-tank guns) fought along with a sprinkling of powerful 7.5cm Pak 40s and long 7.5cm tanks the British referred to as "Mk IV Specials" in North Africa.   The same holds for the air war subject.  Not surprising, Stukas were very important to the campaign, although not in the obvious manner.

Forty-eight pages recount the campaign through Opposing plans and The campaign.    Seven sections provide good detail on the Soviet attacks and German defenses, and the German relief efforts.   Not surprising, the suppression of the Germans  by the Russian winter is remarked upon.  If you are unfamiliar with "Hiwis", this book discusses them, too.    One of the more exciting events was an armored version of the cavalry charge to relieve the Germans.

Finally, Aftermath analyzes the combatants and their performance, plus and the immediate and long term results of the battle, even after the war.  The battlefields today tells you what to look for if you visit the area.

Useful images reinforce the text and few pages lack this visual support: photographs; artwork; maps.   Many photos and illustrations just beg to be reproduced as vignettes and dioramas, i.e., unloading anti-tank guns and other supplies from a Go 242 glider alongside a railroad track, and black-clad Panzertruppen maintaining their scruffily camouflaged tank in a barren winter wonderland.

Photographs range from professional portrait style to amateur "grab shots".   Most are clear enough for modelers and researchers to find useful.  Modelers who want to display their creations on more than a shelf but lack the desire for detailed scenery will be gratified to see just how stark and featureless much of the terrain was.  The short- and long-barreled Panzers, plus anti-tank guns and artillery are effectively represented in photos.  Most of the photos are small, and surprisingly from Stavka archives.  Two photos are color, recently taken for this book.  One is an aerial photo of the fortress area, providing an excellent reference for the color of spring or summer Russian grass and trees.

Artwork provides a look at what the camera did not capture.   Artist Peter Dennis created several scenes.  Maps not only orient the help reader with tactical and strategic maps, Osprey also includes detailed 3-dimensional "bird's-eye-view" maps showing events and timelines.

2.  Glider delivery, 0120hrs, 29 December 1942: delivering anti-tank guns and other supplies, at night, under fire, alongside a railroad track, with new Go 242 gliders.

Personally, I value maps as they assist me in orienting and envisioning the battle.   The photos and artwork should be useful to modelers. 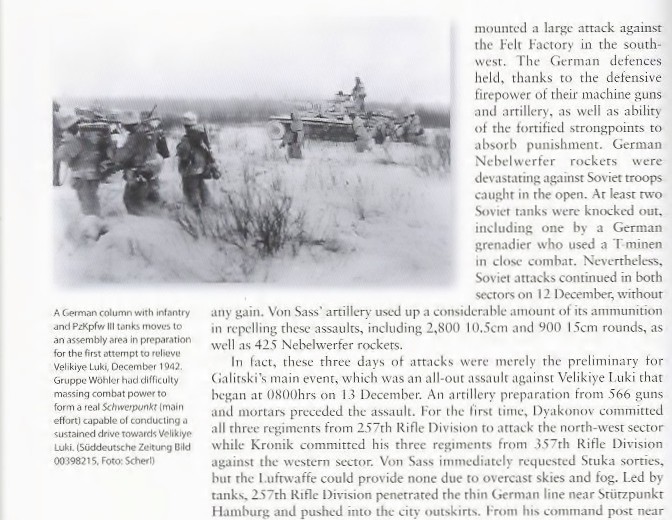 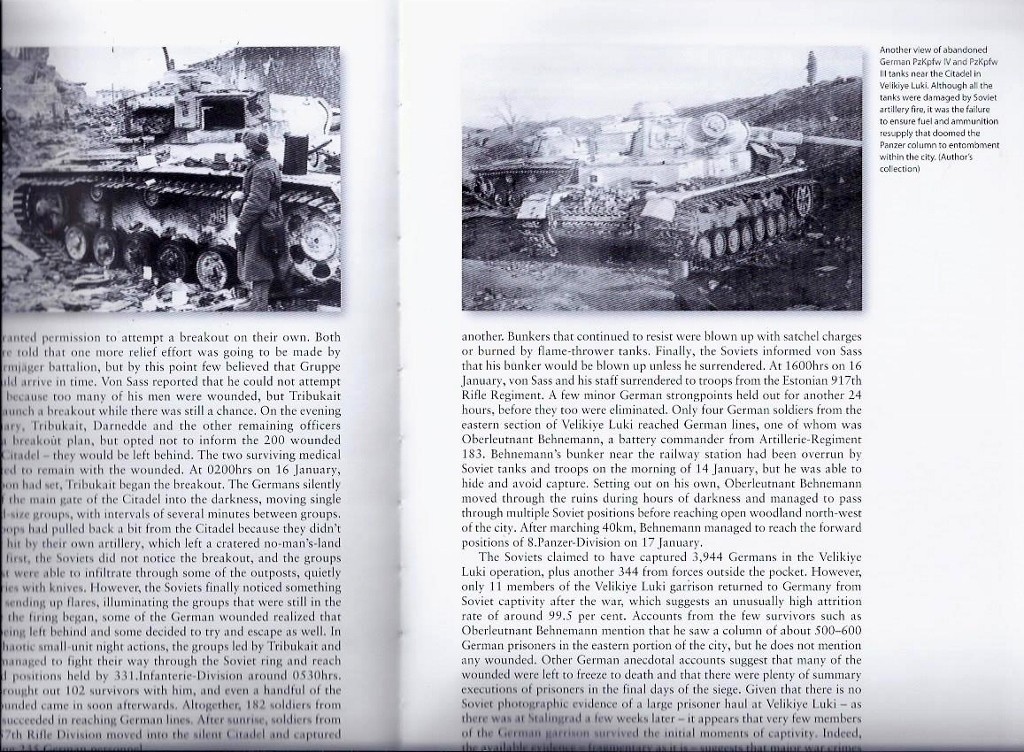 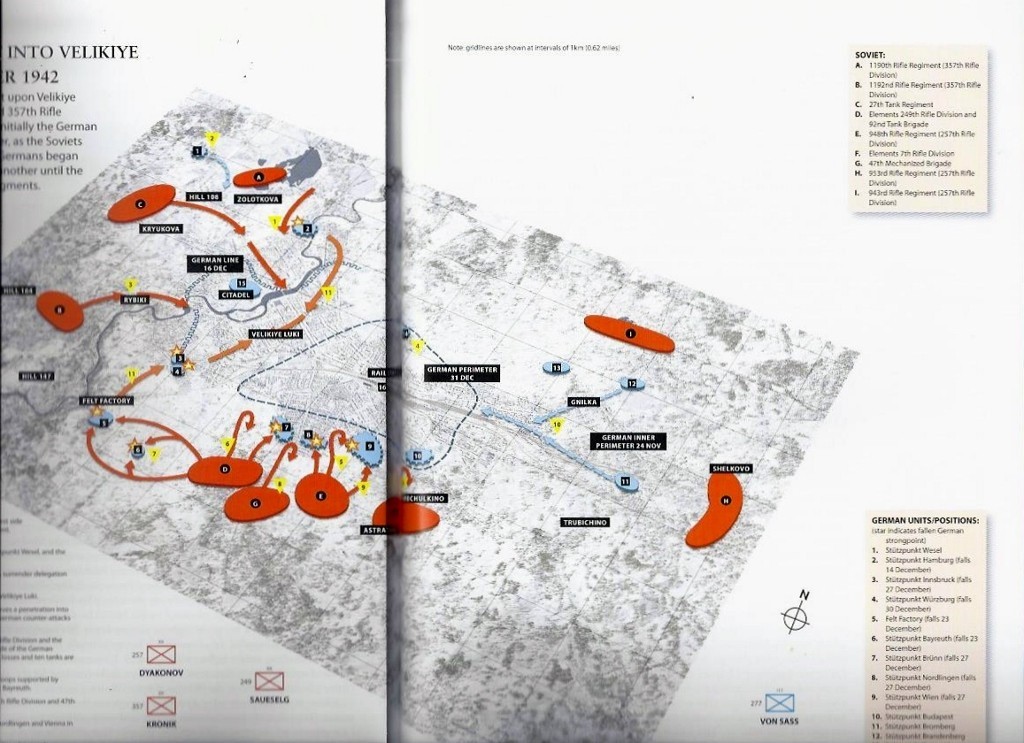 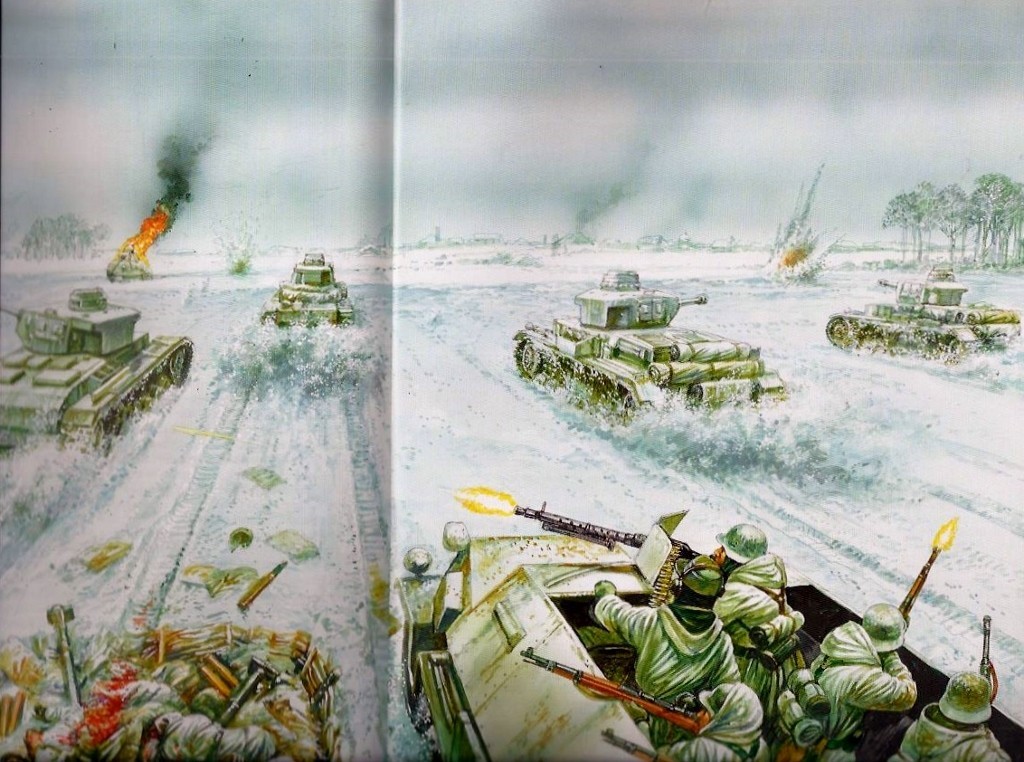 Velikiye Luki 1942-43 The Doomed Fortress tells the story of a major battle overshadowed by the cataclysm of Stalingrad.  It is a very satisfying explanation of the campaign, full of interesting facts and details.  The photographic and illustration support enhances the text.  Scenes of scenery may inspire modelers.

I am satisfied with this history of the battle and recommend this book to students and modelers of the Russian Front.