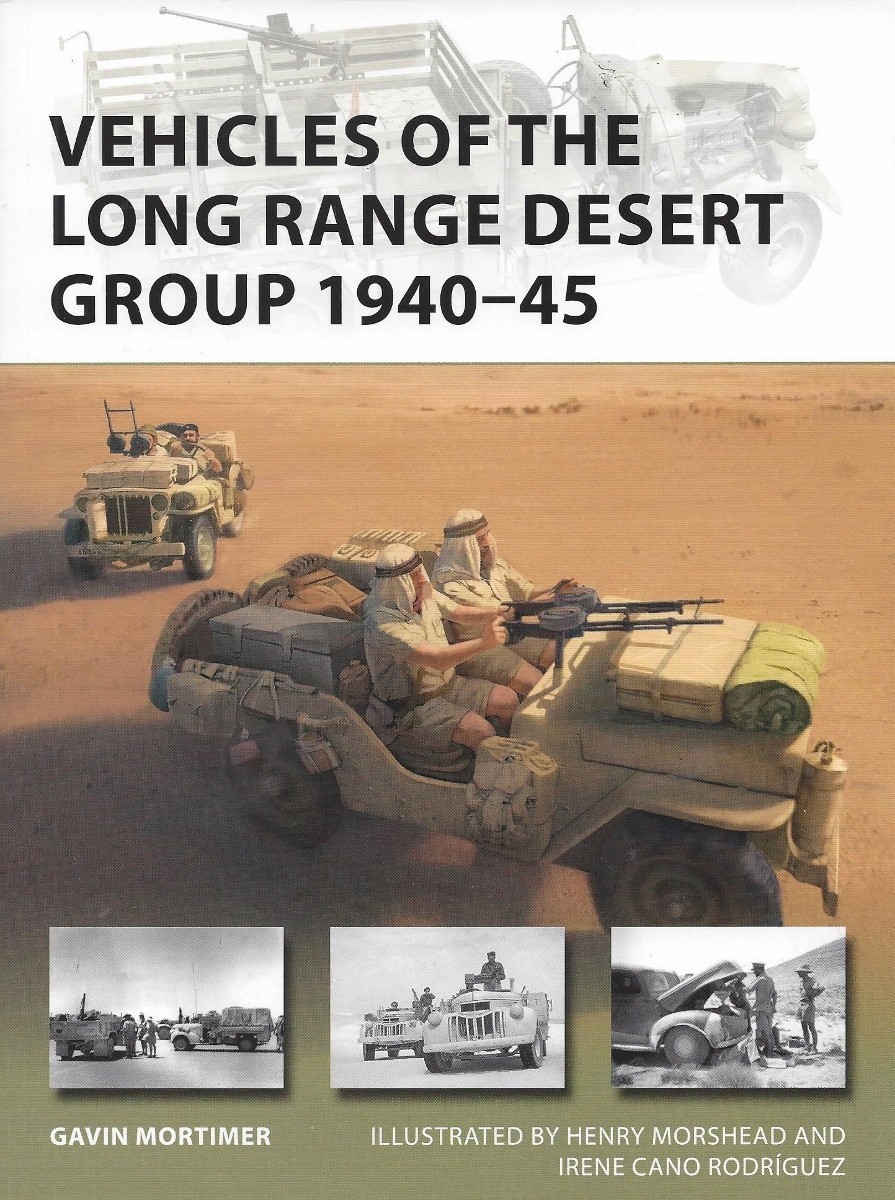 Vehicles of the Long Range Desert Group 1940–45 is Osprey’s title New Vanguard 291.  The 48-page book is authored by Gavin Mortimer and illustrated by Henry Morshead and Irene Cano Rodríguez.  Available in three formats, paperback, PDF, and ePUB, it is catalogued with the Osprey short code NVG 291 and with IBSN 9781472842152 (paperback). Who doesn’t like the Long Range Desert Group (or the SAS), who were pitched to General Wavell as “pirates?”  Their exploits are legendary set the groundwork for many Special Forces units today.  The Long Range Desert Group is a favorite of modelers and historians and this book will help us identify and understand their mounts.  It will also clarify their relationship with the perhaps more famous SAS (Special Air Service), who held – and still do – the LRDG in high esteem.

Osprey tells us of this book:

The Long Range Desert Group was one of the most famous special units of World War II, operating heavily modified vehicles deep behind enemy lines to gather intelligence and support the raids of David Stirling's new Special Air Service.

When war broke out, a pre-war explorer and army officer, Ralph Bagnold,convinced Middle East Command of the need for a reconnaissance force to penetrate into Italian-held desert. Bagnold tested four types of vehicles over rocks and through soft sand to find the best one for his new unit. Bagnold selected the Chevrolet WB (30 CWT) as the signature vehicle of the Long Range Desert Group because it is "fast, simple and easy to handle". With left-hand steering, horizontal grill and round fenders on the rear wheels,these trucks proved themselves popular and effective. The durability of the Chevrolets was demonstrated in January 1941 with an audacious raid on the Italian fort/airstrip at Murzuk, hundreds of miles behind enemy lines.

This book explains the detail of all the vehicles of the LRDG, as well as their modifications, driving techniques, and special kit for surviving behind enemy lines in one of the most hostile environments on earth.

Vehicles of the Long Range Desert Group 1940–45 is 45 pages of information and images organized into these chapters and subsections:

THE LRDG AND THE NORTH AFRICAN CAMPAIGN

THE HEAVY SECTION AND THE MACK NR4

TRICKS OF THE TRADE

Author Gavin Mortimer is the author of other books on the LRDG (and SAS) men and units, who were pitched to General Wavell as “pirates by their founder, Major Ralph Bagnold.”  So, it is fitting that he has expanded our knowledge of the LRDG with this survey of the machines essential to their existence,to carry them on their missions.

The book is smartly organized and written with a balance of technical data and information from LRDG personnel the author has interviewed.  It touches upon the relationship with the SAS and how LRDG differed from them, including use of transport.  Some of the accounts and descriptions are quotes direct from the ‘pirates’ who were there.

The first five pages set the stage, introducing us to why the LRDG formed, founder Bagnold, the situation in North Africa, and why the LRDG holds such esteem.  Along the way we are familiarized with LRDG recruitment, organization and composition (including which nationality Maj. Bagnold thought most suitable for the mission), and some of the key members, although that is not the primary purpose of the book.  The subject of this book is the motor vehicles and they fill the remaining pages. Vehicles are introduced and described with facts including wheel bases,range by fuel tank capacity, load capacity, etc.  That is enhanced and expanded with information about modifications, and narratives by the crews of performance and handling, modifications, suitability, and other personal factors. (One vehicle type had a form of cruise control and allowed the driver to ride in the back with the rest of the crew!) The author describes camouflage patterns used, but in basic, general terms.  We learn which vehicles were liked or disliked by the LRDG, and why.   Accounts from the crews are provided about vehicle weaknesses and their ability to repair the damage.

Equipment, armament, and supply requirements are discussed as well.  Explanations of using the sun compass and sand channels are included. Also mentioned are the weapons used, which were successful and which were failures.

How to keep the vehicles moving across hostile terrain is explained, including driving techniques, different surfaces encountered, and performance of tires.

All of these topics combine to create an informative and thoroughly enjoyable read, and a valuable summary of the LRDG’s ‘pirate ships’.  However, while Mr. Mortimer’s knowledge is not questioned, unfortunately this book is compromised by significant mistakes in layout.  The graphic introduction of the Chevrolet WB (30-cwt) is illustrated with the Willys Jeep, and the two-page cutaway of the Chevrolet WB (30-cwt) is errantly captioned and described as the Willys Jeep; the illustrated camouflage colors are obviously not what is described.  No doubt those mistakes are due to editing and graphic artist layout failures, and does not erode my confidence in the author’s expertise.  Osprey is now aware of the problem and will correct it in reprints.

Modelers, artists and historians will find a great deal of information in the photos that support the text: vehicle configurations; camouflage; markings; uniforms; kit; weapons; stores; terrain. Whether you want to make a diorama or just model a vehicle, you will find a lot of resources in these pages.  Some are “there I was” shots, some are scenes and events, i.e., vehicles bogged in the sand.  Photo quality runs the gamut of fuzzy “grab shots”to skillfully exposed and developed gems. Two color photos are recent images of an SAS tribute to the LRDG, and three of the wartime members at a gathering.

Artwork by Henry Morshead and Irene Cano Rodríguez fills in what the camera missed with a gallery of excellent color illustrations, including “in-action” scenes, including captions.

A.   Chevrolet WB: the inset provides a brief description of the vehicle, its origin, and effectiveness.  The visual component are two three-quarter views of a Willys Jeep – the first major mistake of the book.

C.    Ford F30: two side and end views of a pink and olive painted machine.

E.    Centerfold Willys Jeep.  The second major editing mistake - an excellent cutaway of a Chevy WB instead of the title vehicle, although the caption and the technical table are for the jeep.  The excellent illustration of the WB is keyed to 17 weapons, components, kit, field modifications, and camouflage pattern, although one of the described colors is not what is illustrated.

G.   Digging Out a Chevrolet Truck: action scene of the less glamorous part of running heavily loaded wheeled transport through a desert.  It illustrates stowage and kit, uniforms, and the sand channel “in action.”

Despite the mistakes in matching illustrations with the text– easily sorted out – the photos and artwork magnify the excellent text and value of this book. 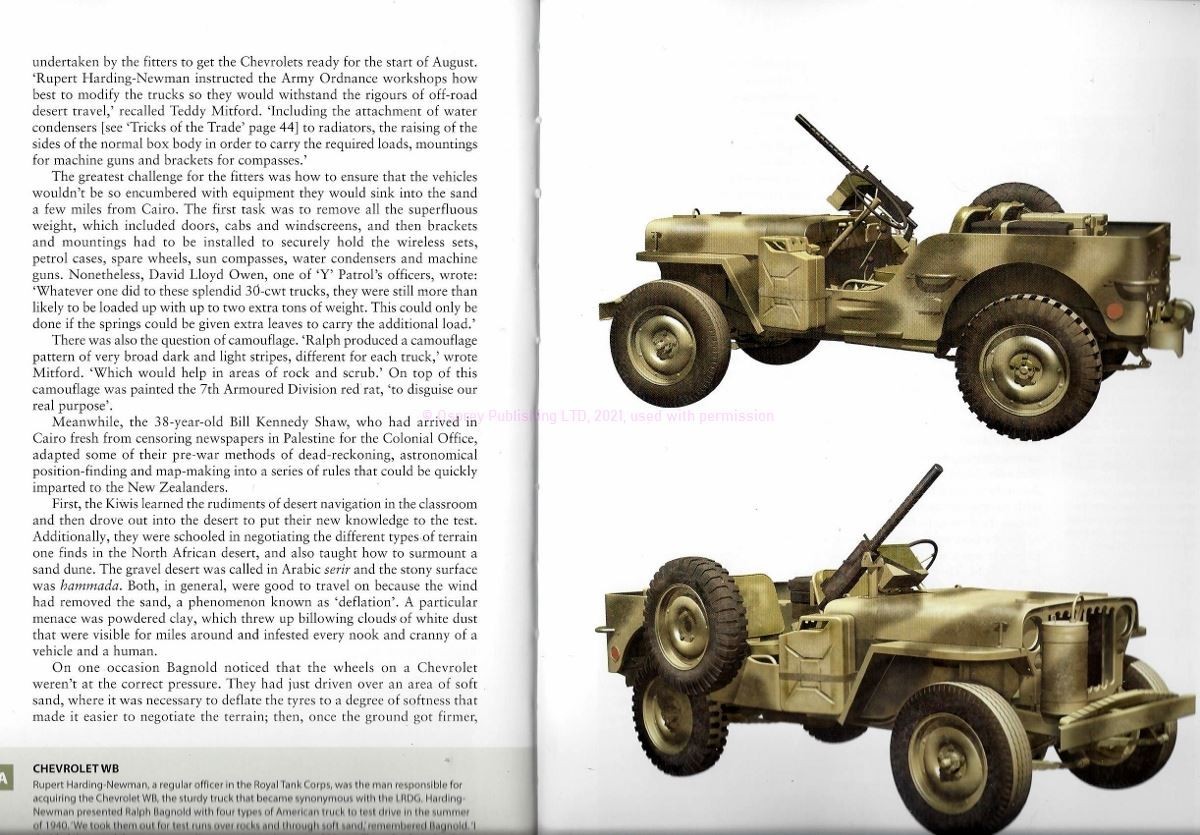 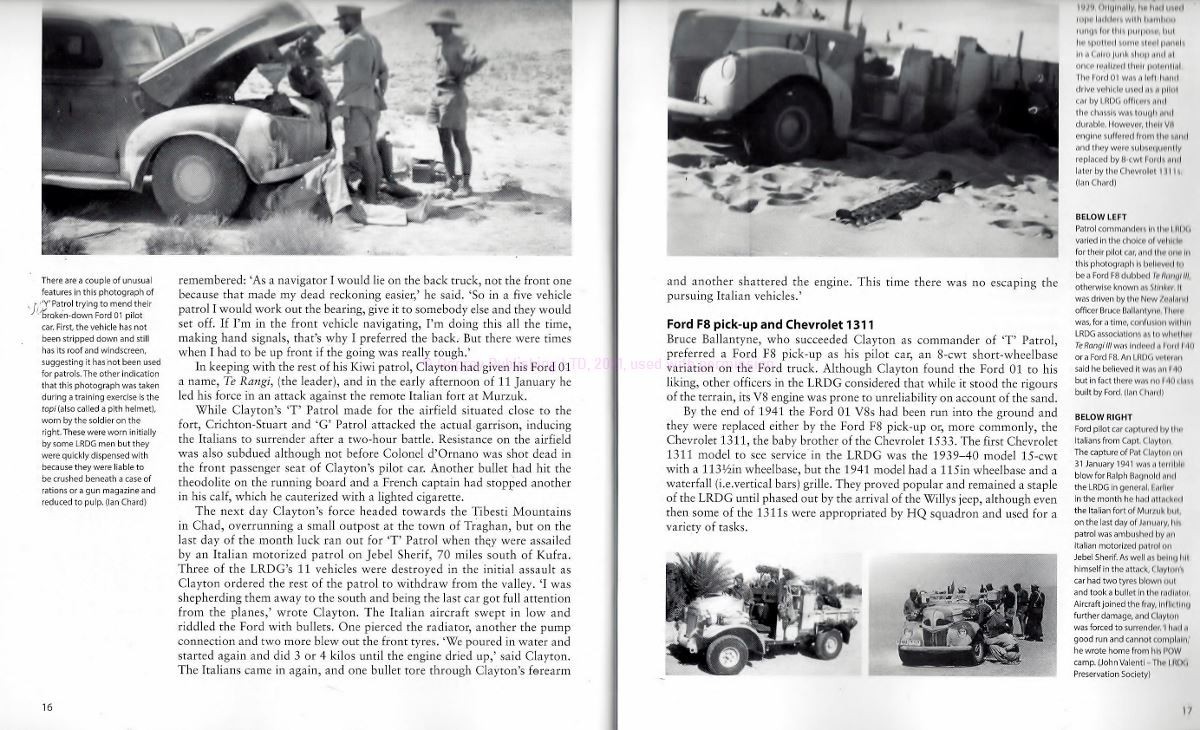 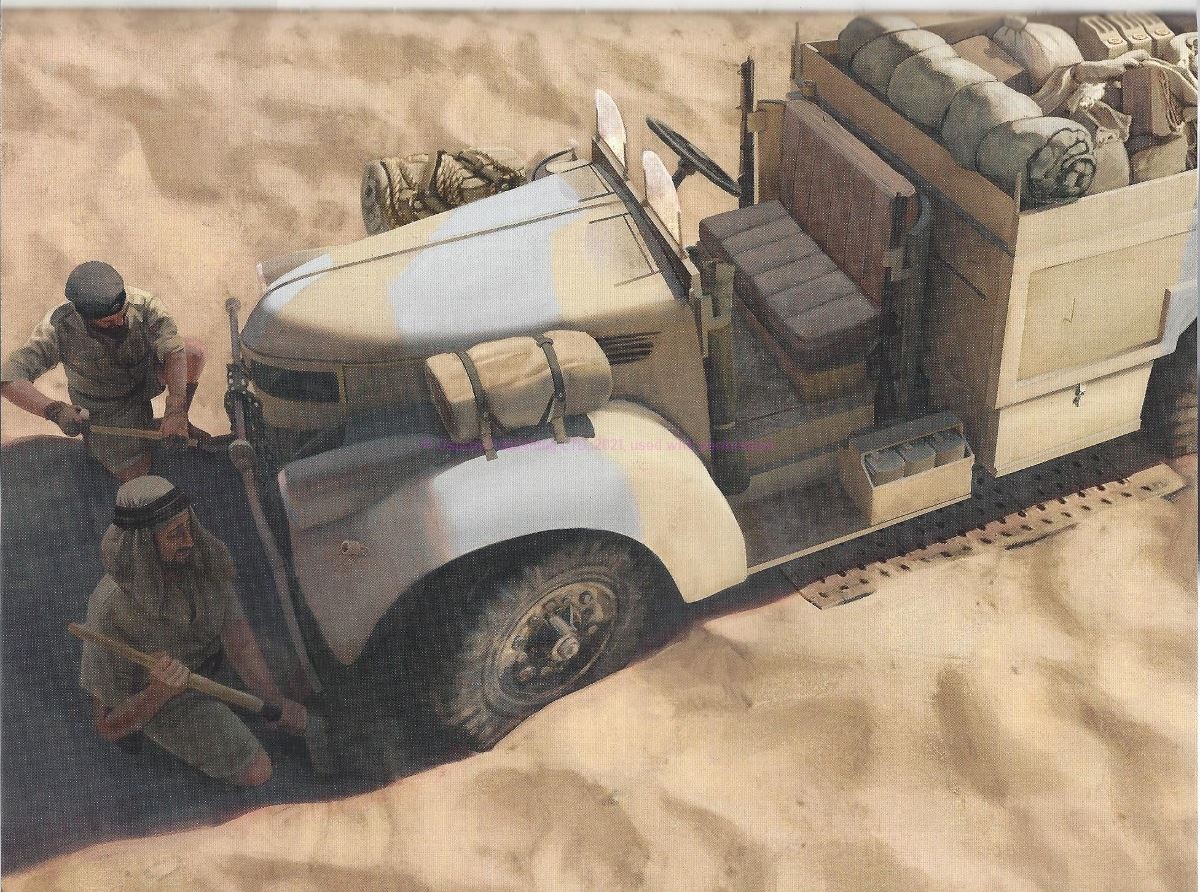 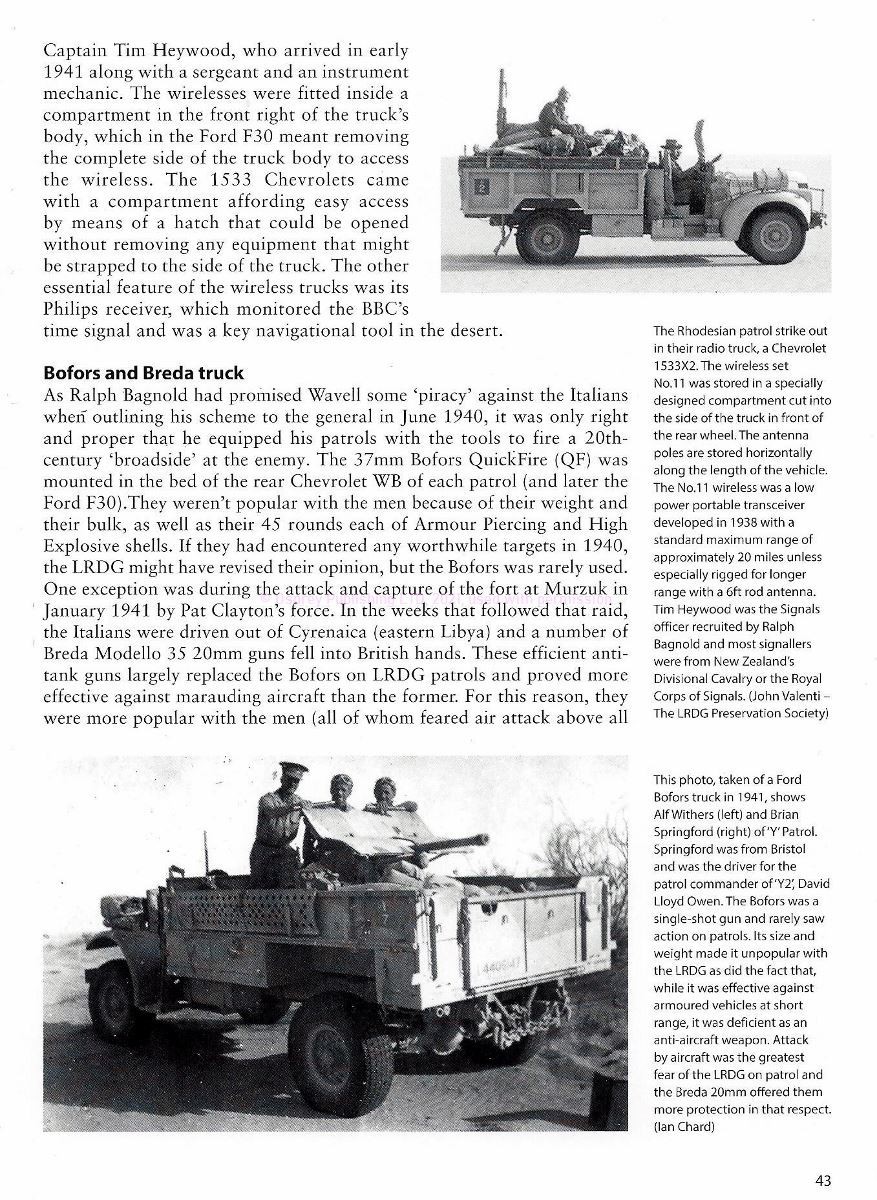 Despite their errors in matching images and text, I am still enthusiastic about Osprey’s Vehicles of the Long Range Desert Group 1940–45.  It is a good primer for modelers about the vehicles that made their mission possible.  The peripheral information about the operations and personnel makes it even better.  First hand accounts are very appreciated.

Obviously, I am disappointed and disturbed by the mismatching of illustrations with the subject titles, but I did not find any such errors in the photo captions.  Unless this book is a reader’s first exposure to jeeps and other vehicles, there should not be any confusion, although it might frustrate readers with a basic knowledge of the machines.  The gallery of photo sand original artwork does support and enhance the text.

So, in spite of that complaint, I still feel comfortable recommending this book to modelers and enthusiasts of LRDG history.  Tamiya and other model companies make kits of most of these subjects, and for the first time I am inspired to build the LRDG trucks.

Please remember to mention to Osprey and retailers that you saw this product here - on Armorama.