JPTRR
Editor
posted on 3 weeks ago — updated on 3 weeks ago
1,418
views
THE SOVIET BALTIC OFFENSIVE, 1944-45 is a new book from Casemate Publishers, part of their Casemate Illustrated series. Key features are special artwork, maps and a wealth of previously unpublished photographs. 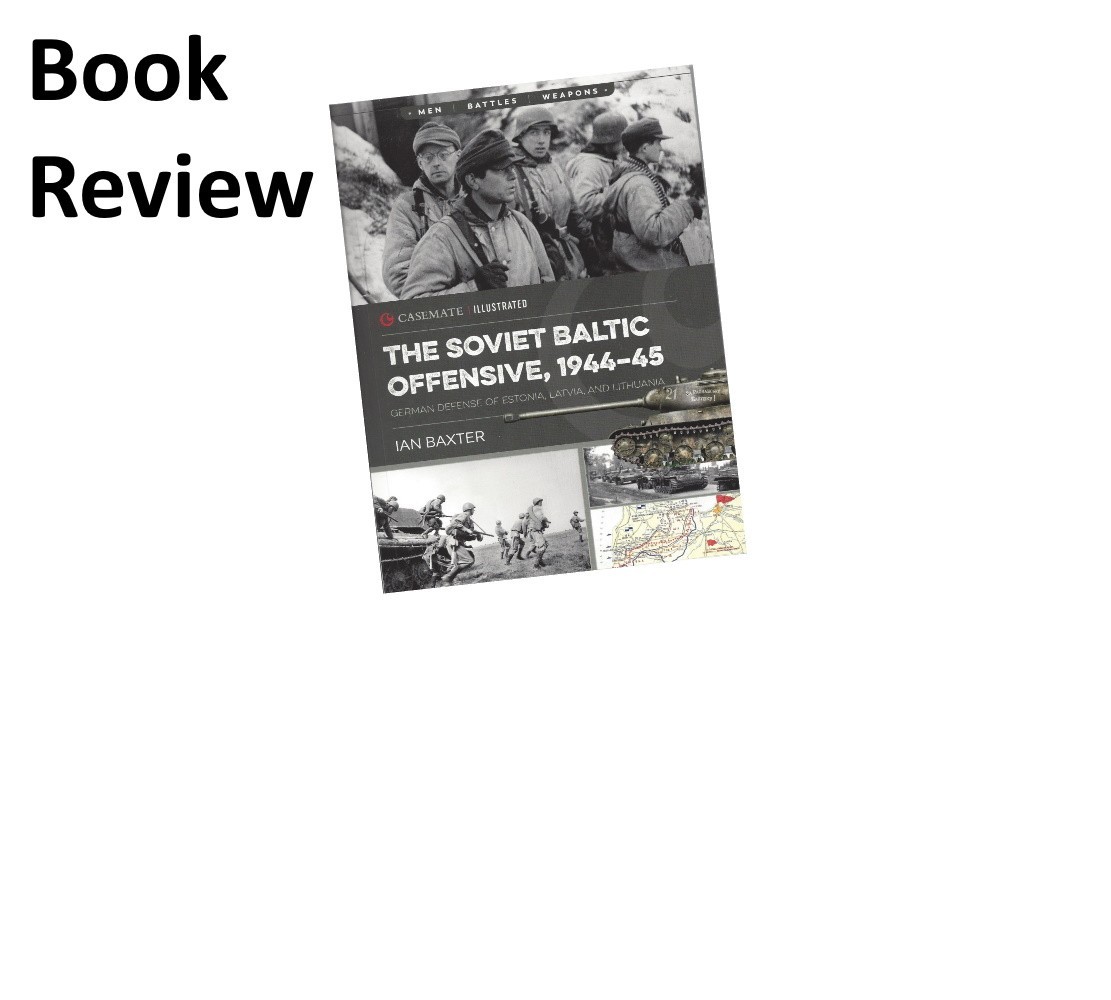 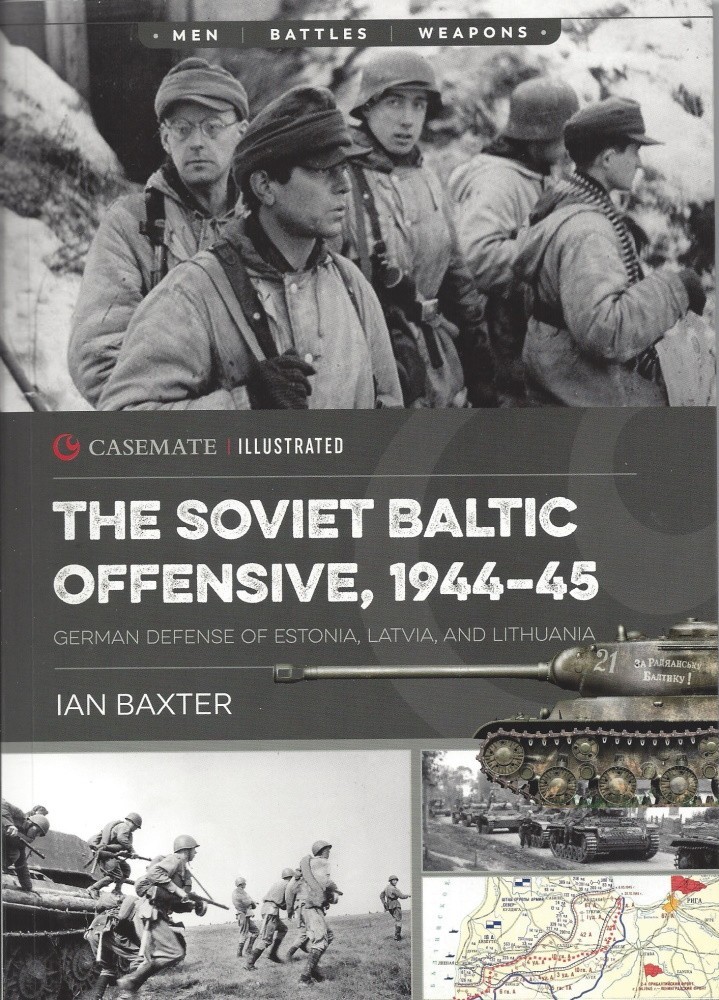 This new book from Casemate Publishers is part of their Casemate Illustrated series. Authored by Ian Baxter, catalogued with ISBN 9781-63624-1067, this 128 glossy page paperback will take up a 6 x 9 x 1/2 inch space on your bookshelf. Key features are special artwork, maps and a wealth of previously unpublished photographs. It covers the last battles of the Wehrmacht and SS in the Baltics.

The Soviet Baltic Offensive is presented through 128 pages organized into 11 chapters and sections:

Introduction: From Victory to Defeat

The Battle for the Narva Bridgehead

Each chapter begins with a concise overview of the subject. I should mention that as well as overviews and background information from the front line, the book also presents details of decisions made in Berlin, i.e., how often Hitler refused to approve of even shallow withdrawals, some identified with specific areas. Occasional callout boxes give interesting information and orders a battle for specific periods, illustrations of men and vehicles, descriptions of entire army groups.

Timeline of Events is a flow chart that begins in December,1943. It's easy to read and captures significant events and decisions. Starting with Introduction: From Victory to Defeat, we are greeted with a description of Operation Barbarossa and a photo that makes me want to drop the book and start building a diorama. It covers in good detail the Nazi’s fortunes from the first day of Barbarossa and their high water mark, to their great retreats of 1944, until their “stand and fight”order that became known as the Battle of the Baltics.

German Forces starts in 1944 and describes the German Army from that point focusing on the forces there in the Baltics. This chapter provides a good description of German force structures in Elements of a Typical German Division, 1944:

Chapter Soviet Forces is much the same covering the elements of a typical Soviet 1944 division, again including:

The Battle of the Narva Bridgehead begins in late 1943 when the Soviet Winter Campaign began with what they refer to as the Estonian Operation, and outlines the catastrophe enveloping the Germans, Hitler's reassigment of commanding officers, provides maps of the Soviet attacks, and profiles of German armored fighting vehicles. The narrative presents an overview of strategy and general descriptions of the fighting. It includes details such as the drafting of Estonian police battalions into the defense of the Narva Bridgehead, supported by the 502 heavy tank battalion. An anecdote is that Narva would later be known as the “Battle of the European SS.” Descriptions of the battlefield occasionally give the physical description of the front lines and strong points.

Fall of Fortress Vilnius covers April through June 1944, and should be interesting as the theater of the highly decorated Tiger commander Otto Carius. While not a first-person squad level depiction of the battle, the text includes a defense in which Carius and one other Tiger destroyed 17 Stalins and several T-34s, before the rest of his company moved up and destroyed the rest of a Soviet tank battalion. For those of you who enjoy reading about the Soviet successes instead of German, do not be disheartened because the book does focus on the fact that the Soviets were winning and the Germans were losing - big time, especially Army Group Center; you will see plenty of photos of surrendering Germans and a scene of victorious Red Army troops crossing the Polish border during Operation Bagration.

Now that you have tasted the flavor of the book, sub-chapter Estonia Buckles continues the narrative although it is mainly comprised of photographs. One photograph is curious and that it shows young members of 11th SS Volunteer Panzer Grenadier Division standing around with big grins on their face, visible although some of the faces are obscured by mosquito netting.

Now that you've tasted this flavor of the book, The Soviet Baltic Offensive follows the same format and includes the same attention to detail. It centers around the fighting over the Latvian capital of Riga. This chapter includes the reminiscence of a wounded German Panzer soldier who wrote;

I've been loaded on a evacuation ship: the whole ship was full of wounded. Because I was actually only lightly wounded, I hung around the upper deck in case of torpedo attack. This was because I had no desire to go down in this steel coffin; I would have preferred to jump into the ice cold water, for which purpose everybody had been given a life jacket. When a submarine alarm was actually given, the mood of the patients and crew fell to rock bottom. The fear can hardly be imagined - in the middle of the Baltic in icy temperatures, expecting the ship to be sunk by a torpedo at any moment.

This chapter has another remarkable photo, an IS-2 knocked out in a narrow rubble strewn street of a city, reminiscent of destroyed Tigers in Villers-Bocage. This chapter also contains sub-chapter such as The Winter Battles. That sub-chapter segways into the full chapter Defeat, a short chapter short on text but full of photographs. Epilogue wraps up the book with only two pages of pictures of prisoners and listing evacuations and casualties.

A book of less than 200 pages trying to describe the monumental Soviet Baltic offensive will not be rich in scalpel-precise detail, but this book is a very good primer and starting point for those interested in reading about the Soviet offensive and German defense in more depth.  In no way is that a criticism of the book because Casemate Illustrated series are meant to be just that - richly illustrated publications using visual content supported by text.  And it is.

I am impressed with this title.  It is the second Casemate Illustrated book that I've read and I look forward to acquiring more.  As a historian, I think it's well worth the price and the space on the bookshelf.  As a modeler, almost every page inspires me to crack open a kit and start gluing and painting.

This book contains numerous callouts and set-out pages presenting data, a great gallery of original artwork and useful maps as well as a photographic candy store - a bonanza for modelers. Almost every group of photographs has at least one that starts the modeling juices percolating, or inspires a diorama. One particularly interesting image is in a nice blizzard scene with winter-white clad Russian mortar crewmen feeding their weapon, crouching behind a Soviet M-72 motorcycle. While it is probably nothing new in books there is a very good front quartering profile of Carius in his Tiger 217.

I don't mean to sound all fanboy but the book is loaded with photos that I've never seen. Not surprising since there's probably tens of thousands of photos that have never appeared in a few books I have on my shelves. A of note:

A.  Seen from behind squads of Germans advancing up a snow blinded muddy track behind Tiger tanks. It is interesting to me that some of them are wearing the basic battle kit so typical of model figure sets since the '60s, yet a couple of them are in full gear with an enormous backpack and tent roll drooped over it. If it were not for the Tiger tanks, one could be forgiven for thinking this was a scene outside of Moscow in 1941 as only a couple of them even have winter coats.

B.  A PaK 40 camouflaged with piles of loose straw, against a background of a snowy stubbly field, flat as a pool table with not a tree in sight; it shows how an interesting diorama can be relatively simple and small.

C.  A group of SU-122s underneath large oak trees - particularly interesting to me as showing Russian tanks in an environment that is not bleak endless steppe, or wispy birch forests.

3. Disposition of advancing Red Army forces between September and early November 1944, showing what became known as the Cortland Pocket.

4. Courland Pocket depicted on a Soviet military map showing the Red Army surrounding it between October 1944 and May 1945.

a. German and Soviet Tank Men: illustrates in profile a KV-1 with tanker, and a Pz.Kpfw.35(t) seen head-on (but not a panzer crewman in sight).

c. Soviet ISU-152S Heavy Self-Propelled Gun, and a Submachine gunner: ISU-152 in profile and an action scene of the machine gunner on his knees spraying hate down range.

i. Panzer V and Waffen SS Sturmmann: Panther in profile and an in-action view of the SS man. 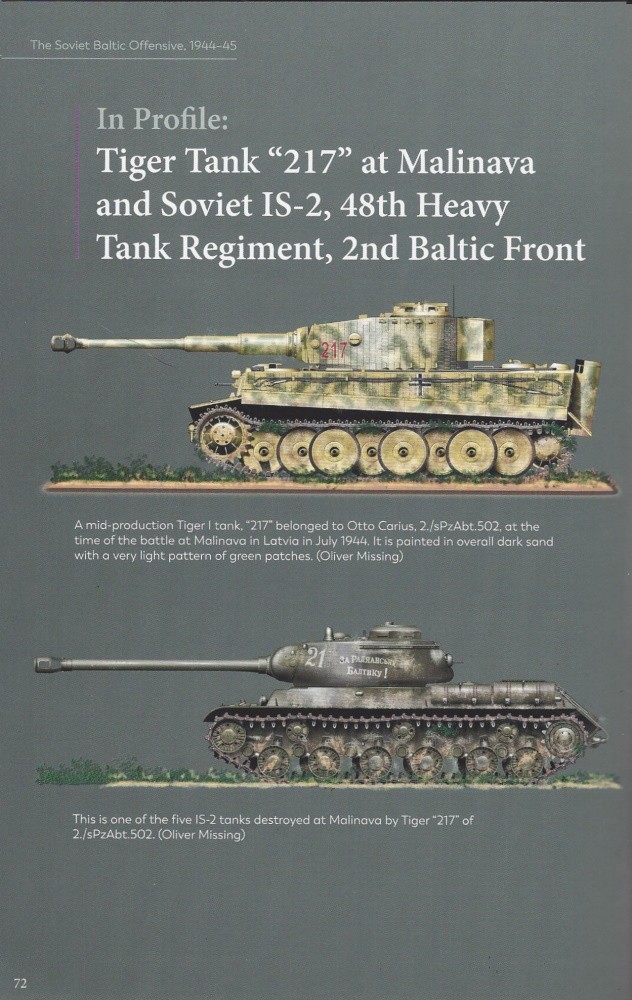 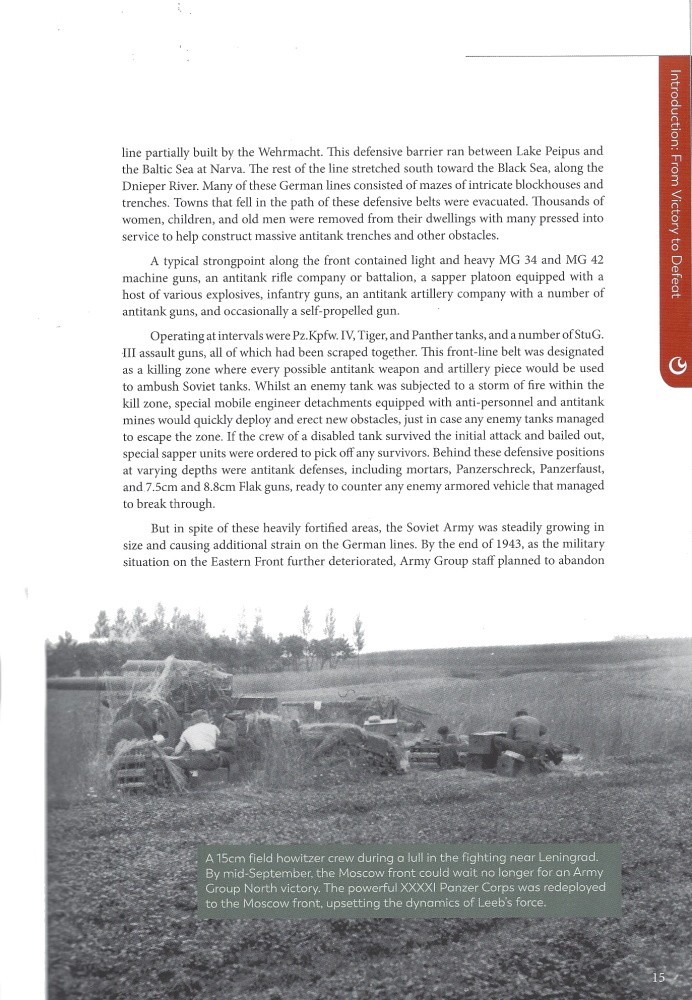 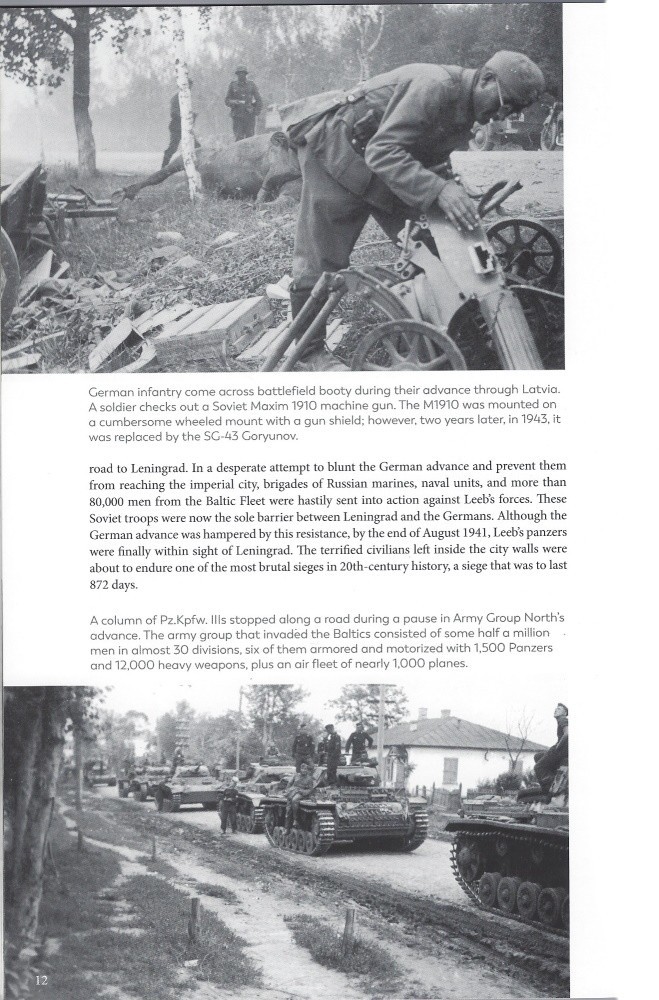 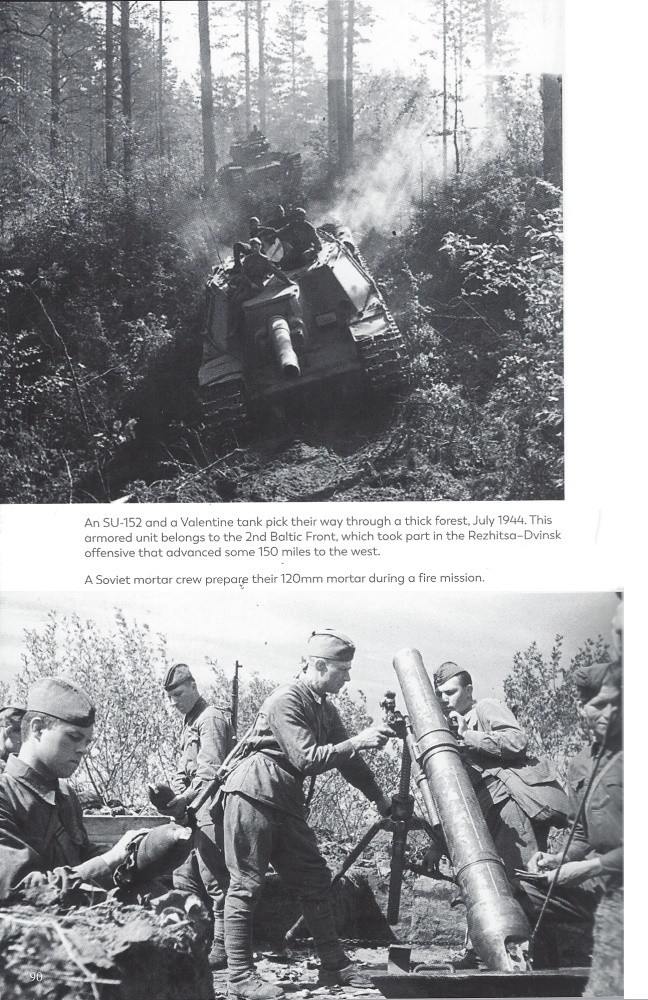 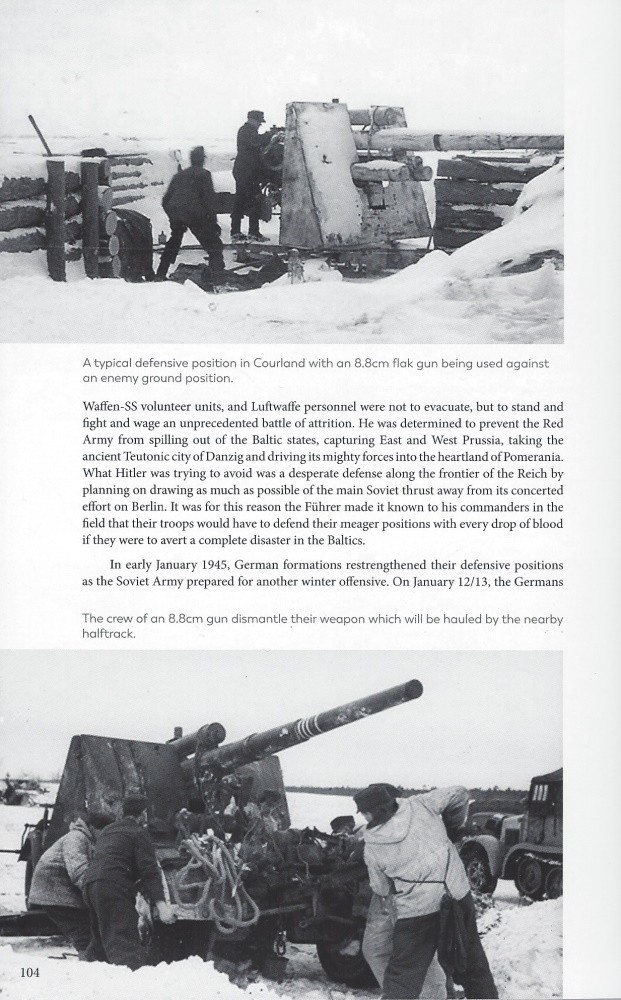 I find The Soviet Baltic Offensive, 1944-45  another impressive title in the Casement Illustrated series, and a useful book for modelers interested in the Axis and Soviet forces engaged in that epic struggle.  The text is clear and informative, and the visual galleries alone are worth acquiring the book.  I highly recommend this book from Casemate.

Please remember to mention to Casemate and retailers that you saw this product here - on Armorama.