HARV
posted on 9 months ago
1,632
views
A review by Randy L Harvey of The French 75 - The 75mm M1897 Field Gun That Revolutionized Modern Artillery from Osprey Publishing by author Steven J. Zaloga and illustrator Felipe Rodriguez. 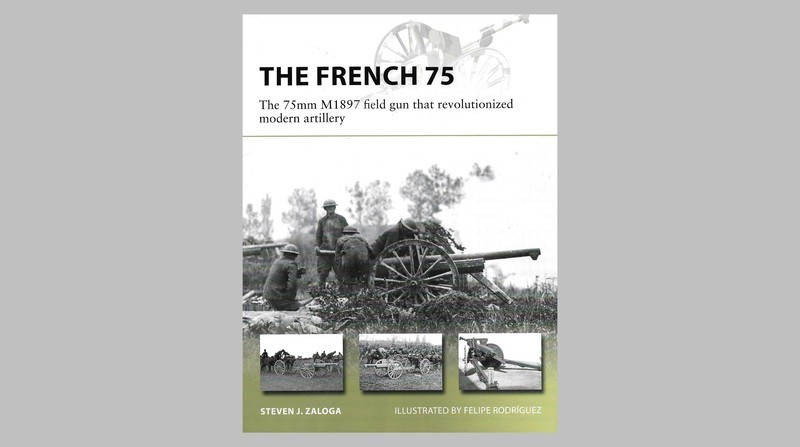 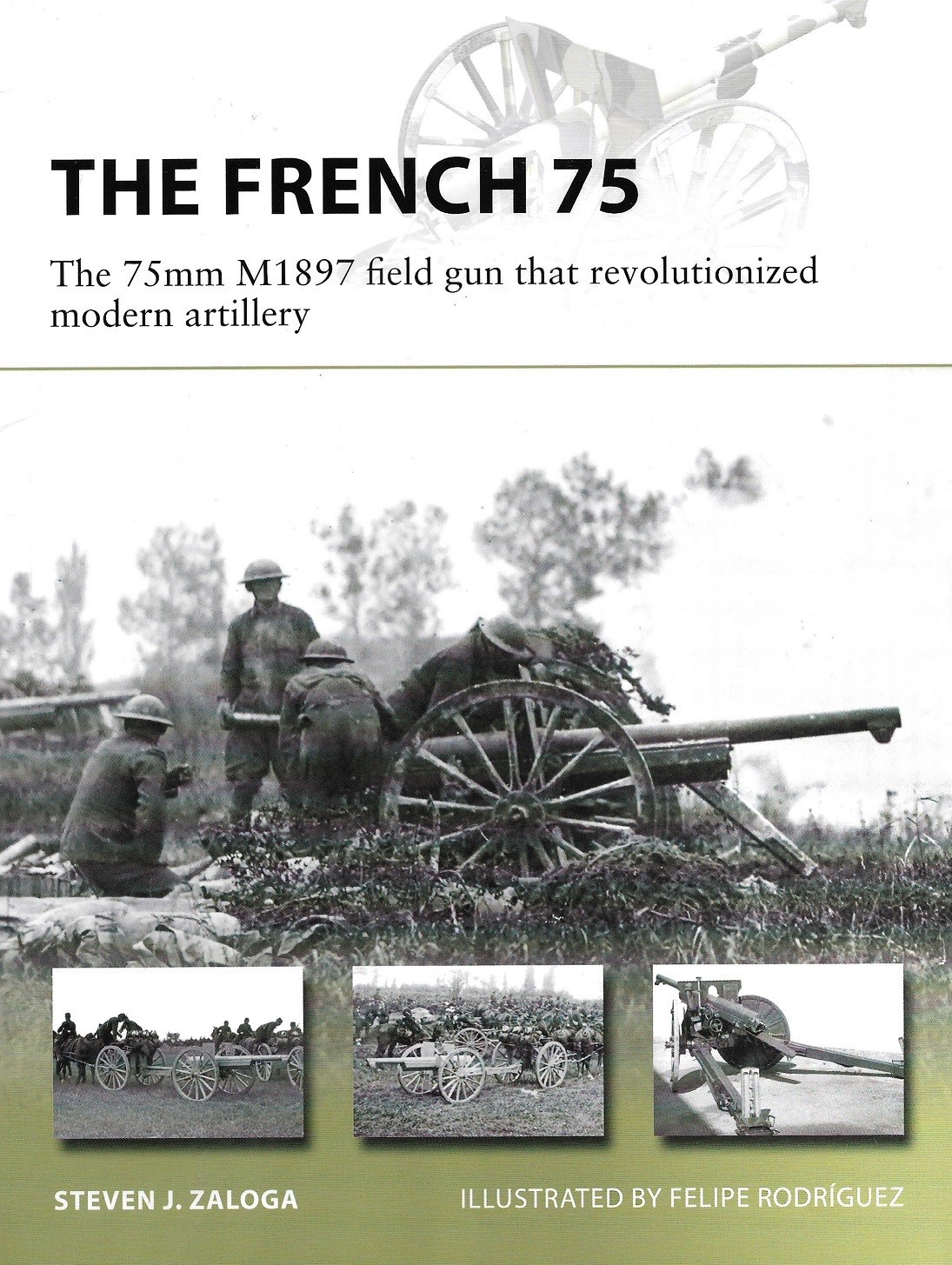 ** France’s legendary 75mm M1897 was the first modern field gun to pioneer several critical innovations in field artillery design, including a fast-acting breech and a soft-recoil system, integrating them into a superior, lightweight, rapid-firing field gun.

The 75mm M1897 earned its reputation in the Great War, forming the backbone of French field artillery.  It was widely distributed to Allied armies, including the American Expeditionary Forces, and was later exported worldwide.  Due to its modernity and sound design, the 75mm remained in service well into World War II.  The US license-built 75mm also saw widespread service, ending its career in the M3 GMC tank destroyer.  The M1897 was used by French, Polish and other armies in the Blitzkrieg campaigns of 1939-40 and thousands were captured by the German Army in 1940.  Surprisingly, many were also converted into a very effective anti-tank gun: the PaK 97/38.

This fascinating book explores the history of the ‘Soixante-quinze’, from its design and development to its combat use around the world. **

Osprey Publications has released The French 75 - The 75mm M1897 Field Gun That Revolutionized Modern Artillery as Number 288 in their New Vanguard series. It is a soft cover book with 48 pages. Included with the text are black and white and color photographs, color illustrations, detailed captions and more. It has a 2020 copyright, a publication date of October 29, 2020 and the ISBN is 978-1-4728-3930-5.

- A 75mm gun for the horse artillery

- Improvements to the 75mm gun

- The 75mm in the final battles

Author Steven J. Zaloga discusses the use of the French 75 from its development through its use in both world wars and the interwar period.  The text goes into great detail in all areas of the book, as outlined on the contents page, and all subjects are well discussed down to the smallest detail.  Please refer to the contents listing for the areas that are covered through the book.  Steven J. Zaloga does an excellent job of detailing the French 75 from its development to use by the French and the request by other countries to purchase the weapon and add it to their own arsenals.  Successes of the weapon as well as shortcomings discovered and improvements that were made are covered in the text as well.  An area I found interesting is how the weapons were sold, traded, captured, etc., by various countries throughout the service time of the weapon.  Some had been in service with various countries which had been obtained by various means until some of them were too worn out for further use.  Another item that I found to be interesting is that the weapon was in use by both the allied and axis forces at the same time during World War II in a variety of roles such as anti-tank, anti-aircraft and harbor defense in fixed positions or mounted to vehicles, etc.  The text in the book is nicely written and well detailed. As I read through the text, I didn’t notice any spelling or grammatical errors.  The only error I found throughout the book is a missing parenthesis on page 29 in the technical data chart.  Grammar and spelling might not be an important factor to everyone however it is something that I take notice of and pass on my findings.  I feel that if the text is well written then it shows that the author has taken the time to be professional with their writing.  The knowledge that can be drawn from this volume is excellent. After reading through the volume, I could not think of any subject in regards to the French 75 and its history that was not covered in great detail in an easy to read, nicely flowing and understandable manner. Anyone wanting to add an excellent reference and history book on the French 75 - The 75mm M1897 Field Gun and other period artillery and associated equipment to their personal library will be pleased with this very informative and detailed book.

There are 15 color illustrations with detailed captions included in the volume by illustrator Felipe Rodriguez.  The illustrations are very well done, nicely detailed and are of:

- General arrangement drawing showing the standard wartime version of the canon de 75 modèle 1897 with the improved seven-piece shield adopted in 1909.

- The combination of the limber and caisson for the canon de 75.

- The second pattern of having the gun mounted with the barrel pointing forward over the cab.

- A two-page action illustration showing the Canon De 75 Modèle 1897 with a key describing 27 specific items of interest on the weapon with corresponding numbers pointing to the item on the illustration.  Also provided is a technical data chart detailing 20 specific items such as caliber, weight, rate of fire, etc.

- Citroën Kégresse P17 half-track being used as a prime mover for the Canon De 75.

- Shrapnel projectile with base charge

The captions are well written and explain the accompanying photographs and illustrations in great detail eliminating any doubt as to what is shown.  The captions go into very specific detail as to the specific artillery piece shown as well as the country it is being used by, dates and locations, associated equipment and other such pertinent information.  I was very impressed by Steven J. Zaloga’s captions as they are very helpful to the reader due to their detailed content as opposed to other captions that I have seen that are very brief and lacking in detail.

There is 1 note included in this volume and they are:

There are 6 informational charts included in this volume and they are of:

- The chart lists the numbers of accidents, barrel bursts and cumulative, related to the M1897 from December 1914 to December 1915.

- Standard Ammunition for the Canon de 75

- Production of 75mm Model 1897 Guns in the United States

- The chart lists three different contractors and number of orders placed the completed orders in 1918 and 1919 in regards to gun carriages and gun barrels.

- The chart lists four different types of 75mm rounds and the number of each type manufactured with a total number of all combined.

Osprey Publishing’s, The French 75 - The 75mm M1897 Field Gun That Revolutionized Modern Artillery is also available as a Kindle version through Amazon. 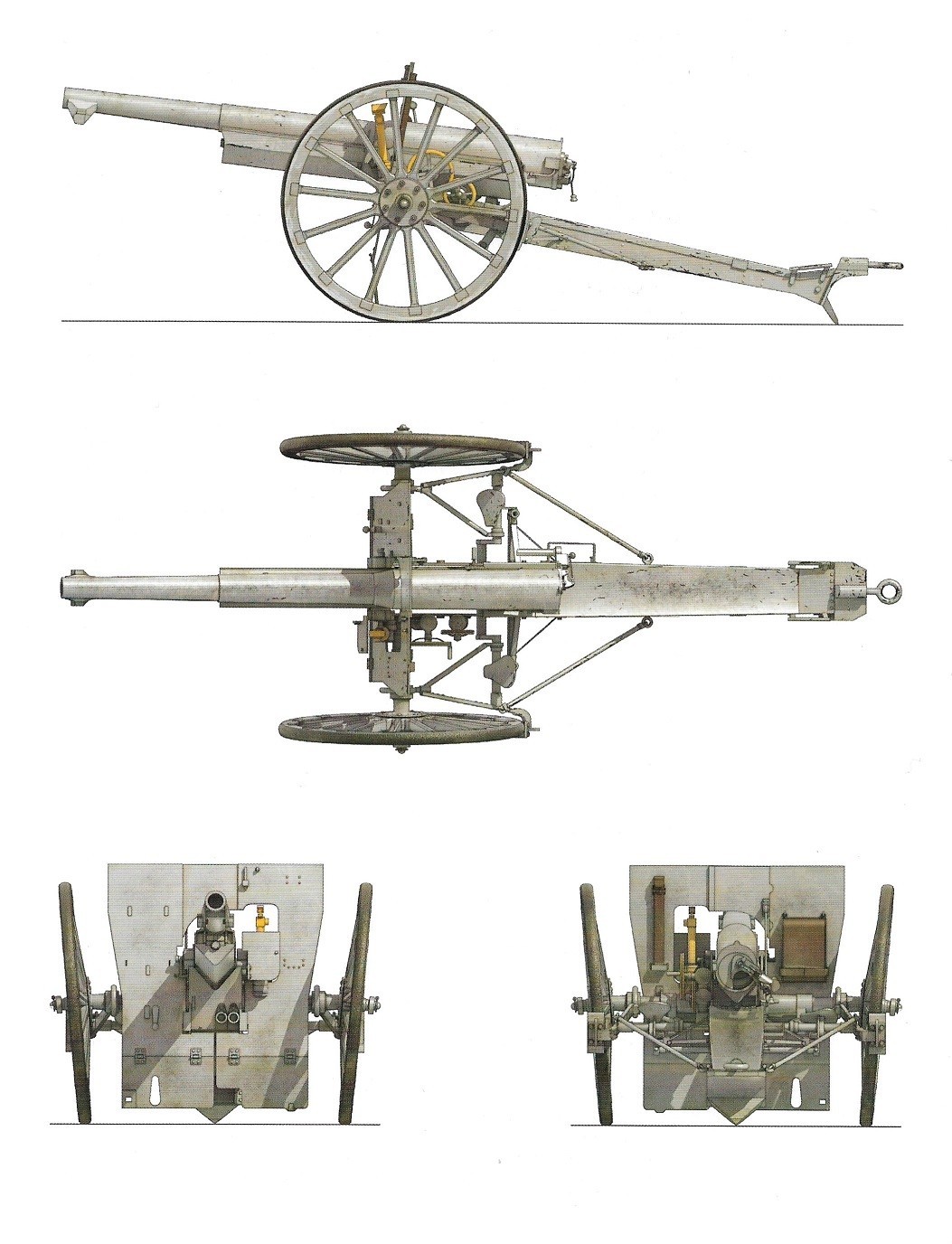 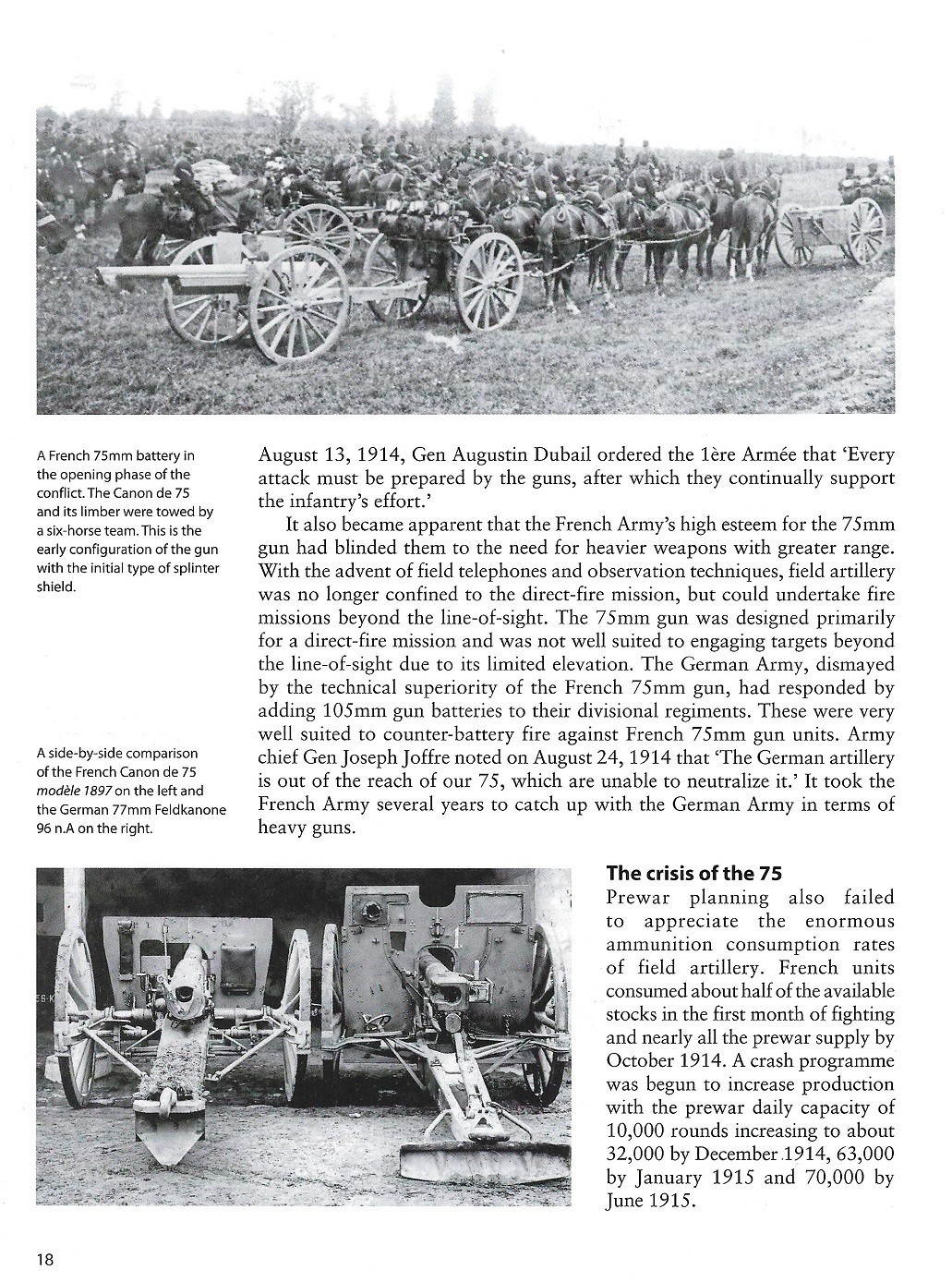 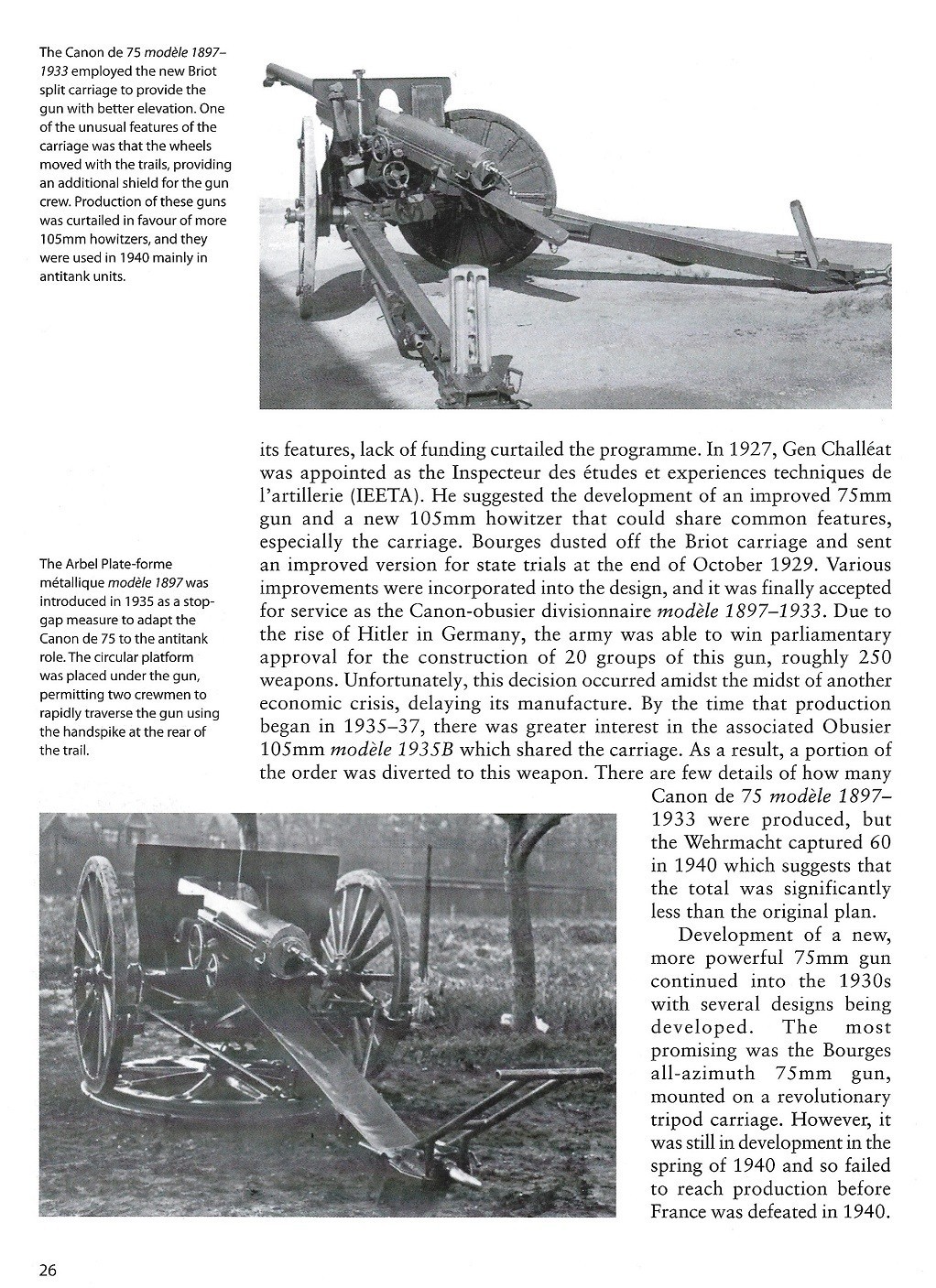 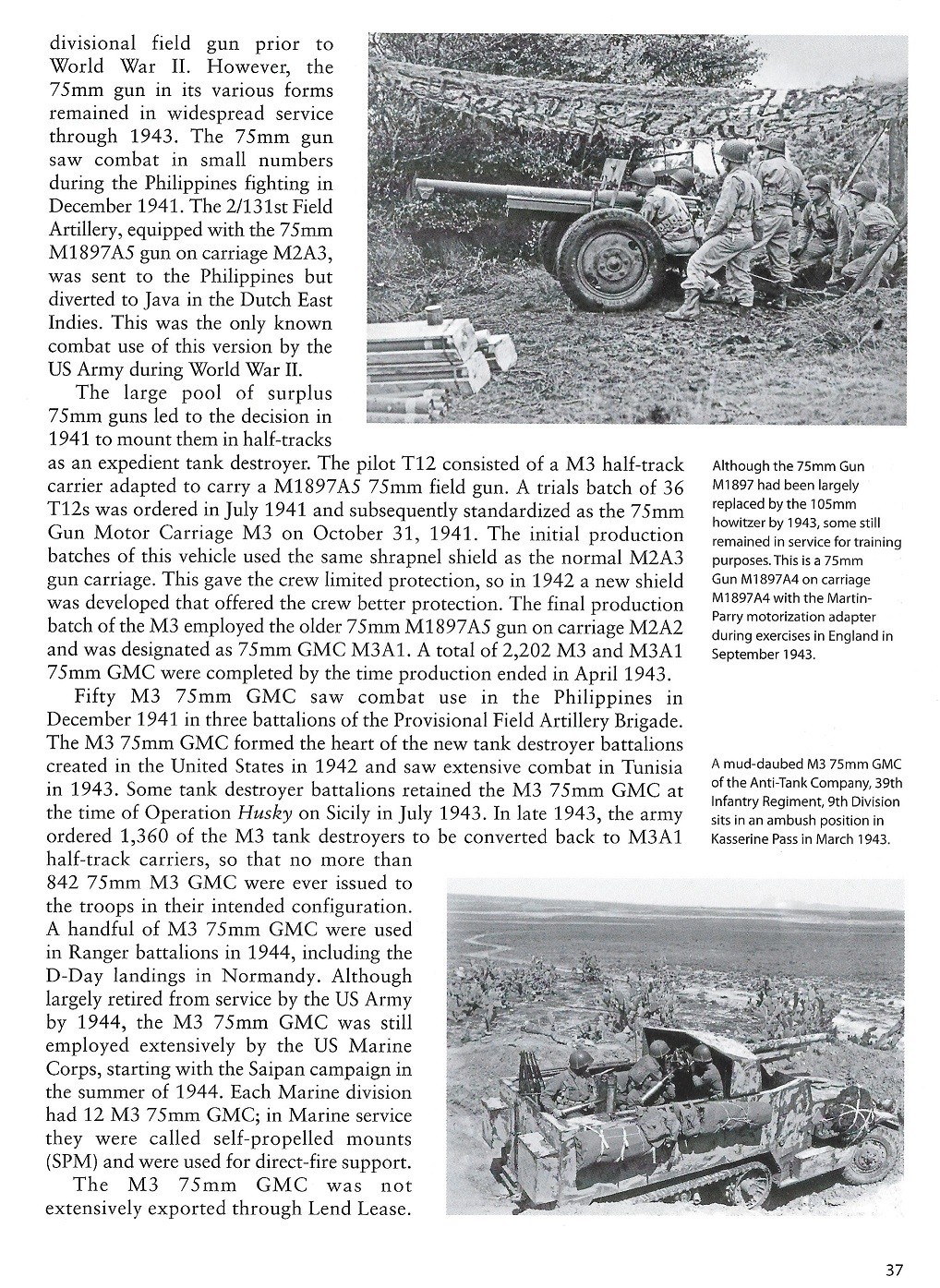