Kylie Newton
posted on 8 months ago — updated on 3 weeks ago
2,485
views
A review of this book. 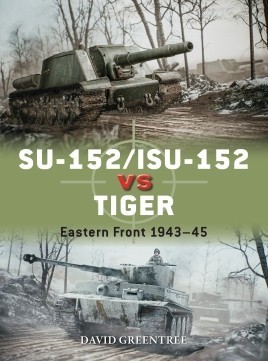 ‘SU-152/ISU-152 vs Tiger, Eastern front 1943-45’ by David GREENTREE, from Osprey, number 120 in their ‘Duel’ series looks at battles on the Eastern Front featuring the Soviet SU/ISU-152 and German Tiger tank. It comes in at 80 pages total, including index; has 50 images, 10 colour plates – including cut-aways, 2 maps, and a sidebar profile of a tank ace from each side.

The SU/ISU 152 was the result of mating an artillery gun into a fixed casement on a self-propelled chassis, first the KV then later the ISU chassis.

Introduces the SU/ISU, features a profile image of each, and includes a clear map of where the SU/ISU deployed against the Tiger.

Covers April 1942 to March 1945 with paragraphs of the notable milestones in the development of the SU/ISU.

A brief history of how the SU came about, then the ISU from that, some difficulties that were overcome before the respective vehicles became operational, and a very good colour plate showing the working compartment of the ISU-152, which is not spatial.

Several pages background the two protagonists that make up the book.

Details several known battles (Belgorod-Kharkov offensive, Krivoi Rog, Op Bagration summer 1944 as a few examples) where the SU/ISU faced off against the Tiger, and a couple of instances where it prevailed. Comes with a map and profiles of Hans Bölter representing Axis Germany, and Nikolai Shishkin for the Soviets.

The book is summarised into about a page which concludes the SU/ISU was not effective against the Tiger.

Acronyms – some specific to this book, and new to me; helpful for following the organisation of Soviet forces.

I was expecting a summation of the development of the SU/ISU into a tank killer, tactics crews used to defeat a (comparatively) more nimble, better armed opponent, the effects of a 152mm artillery round on the Tiger, and 8.8cm round on the SU/ISU, whether that was glancing off of the armour, or penetrating the vehicle and the result thereof. What this book is is a brief introduction to the SU/ISU, and a summation of the battles it fought on the eastern front against Tigers. The author concludes that the SU/ISU was not an effective anti-tank weapon due to low rate of fire and limited on-board ammunition, use to punch through defences or absorb shots whilst T 34/85 worked the flanks.

A good read, easily done in an afternoon, and with good supporting illustrations. Recommended.