varanusk
Editor
posted on 6 months ago — updated on 1 month ago
1,232
views
In detail look at Ostfront Panzers Vol. 2, a photo collection of German Armour in Belorussia between 1943 and 1944 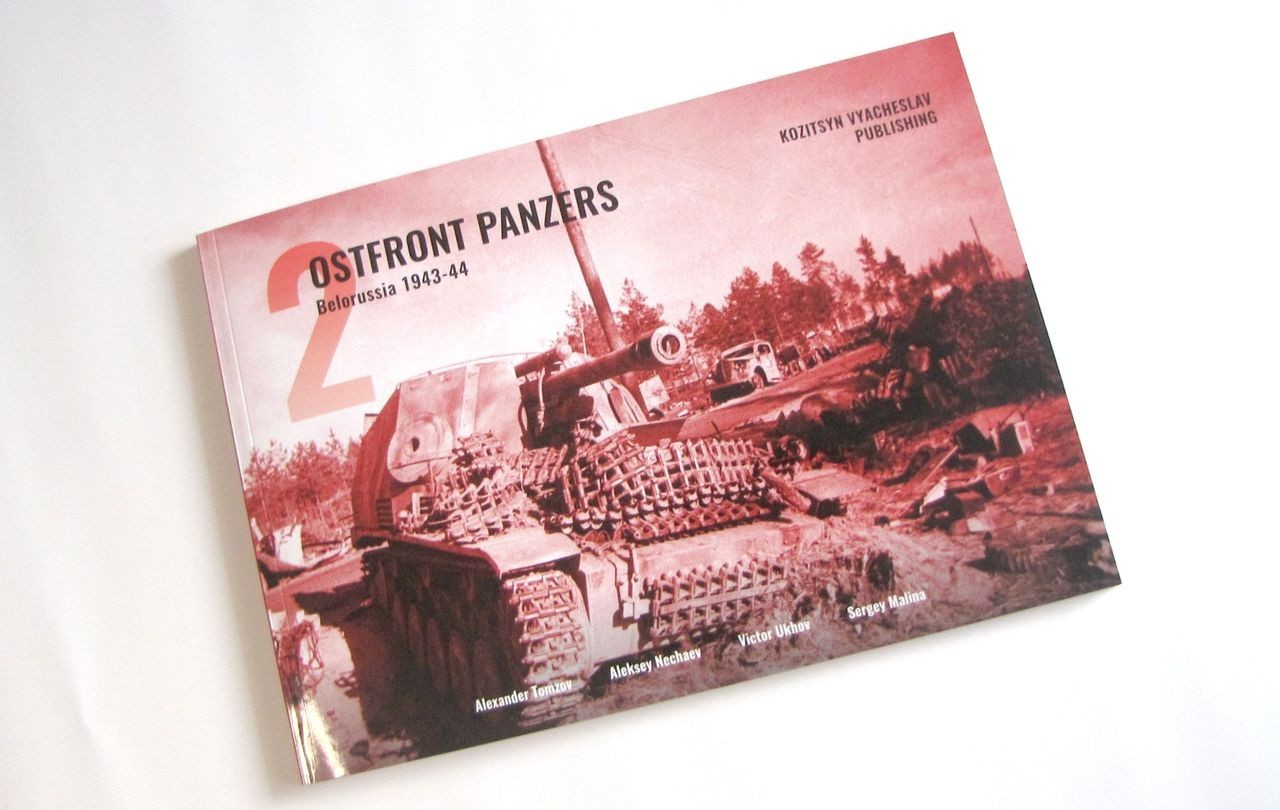 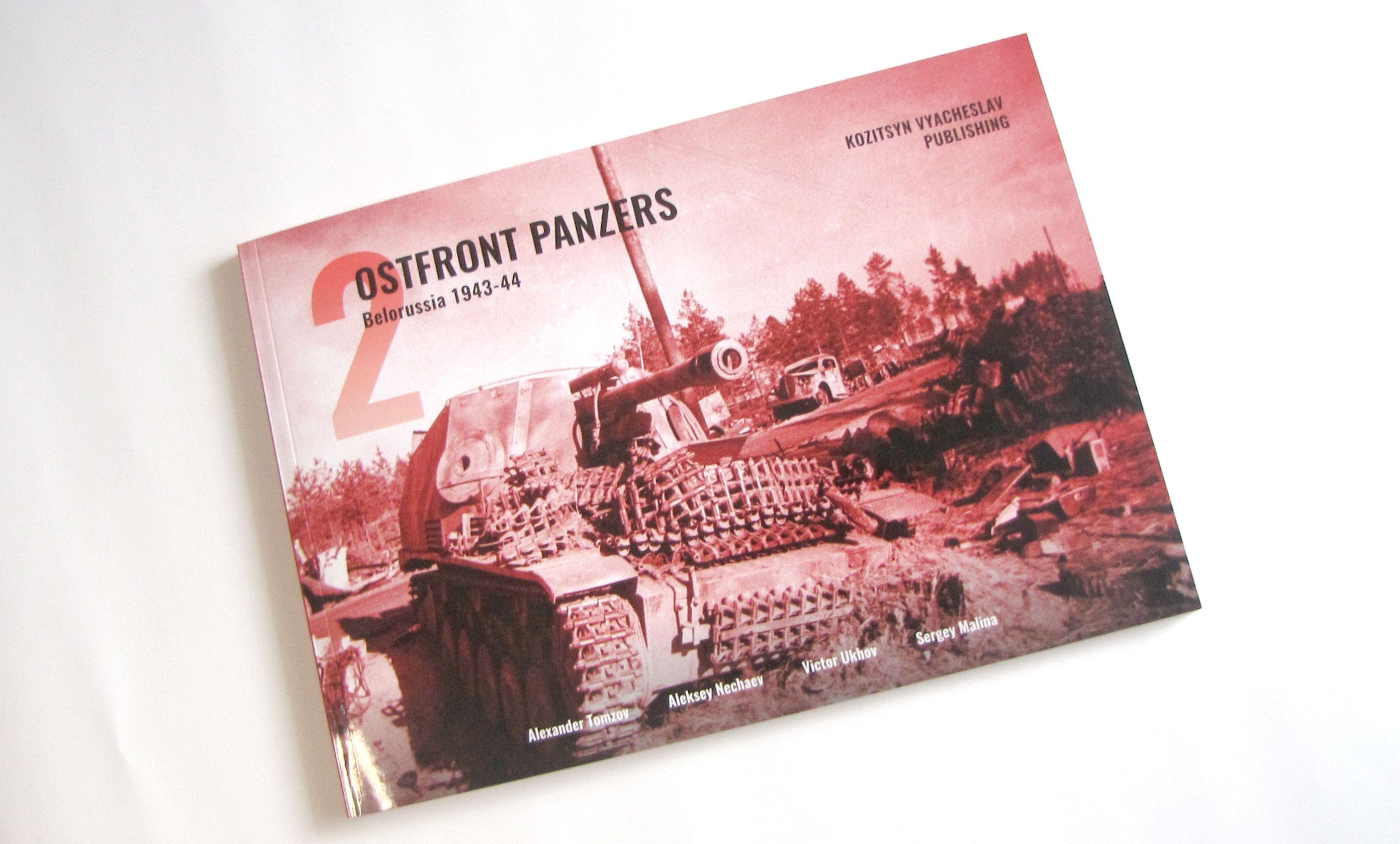 Kozitsyn Vyacheslav Publishing has recently released the Second volume of their Ostfront Panzers series. The book is a softcover A4 landscape format with 96 pages, printed in gloss, thick paper.

The authors are Alexander Tomzov, Aleksey Nechaev, VIctor Ukhow and Sergey Malina, with Lee Archer from Panzerwrecks cooperating with the translation.

It is a photo collection focused on Belorussia fights between 1943-1944. This time frame includes the first Soviet attempts to recapture Belorussia from Army Group Center in 1943 to the massive offensive code named Operation Bagration in 1944.

The book is divided in five sections, covering different timeframes and places:

As with the previous volume, the main subject are photos of knocked out or abandoned vehicles in different states of destruction. Some are completely destroyed, but often it is possible to still see a lot of details. 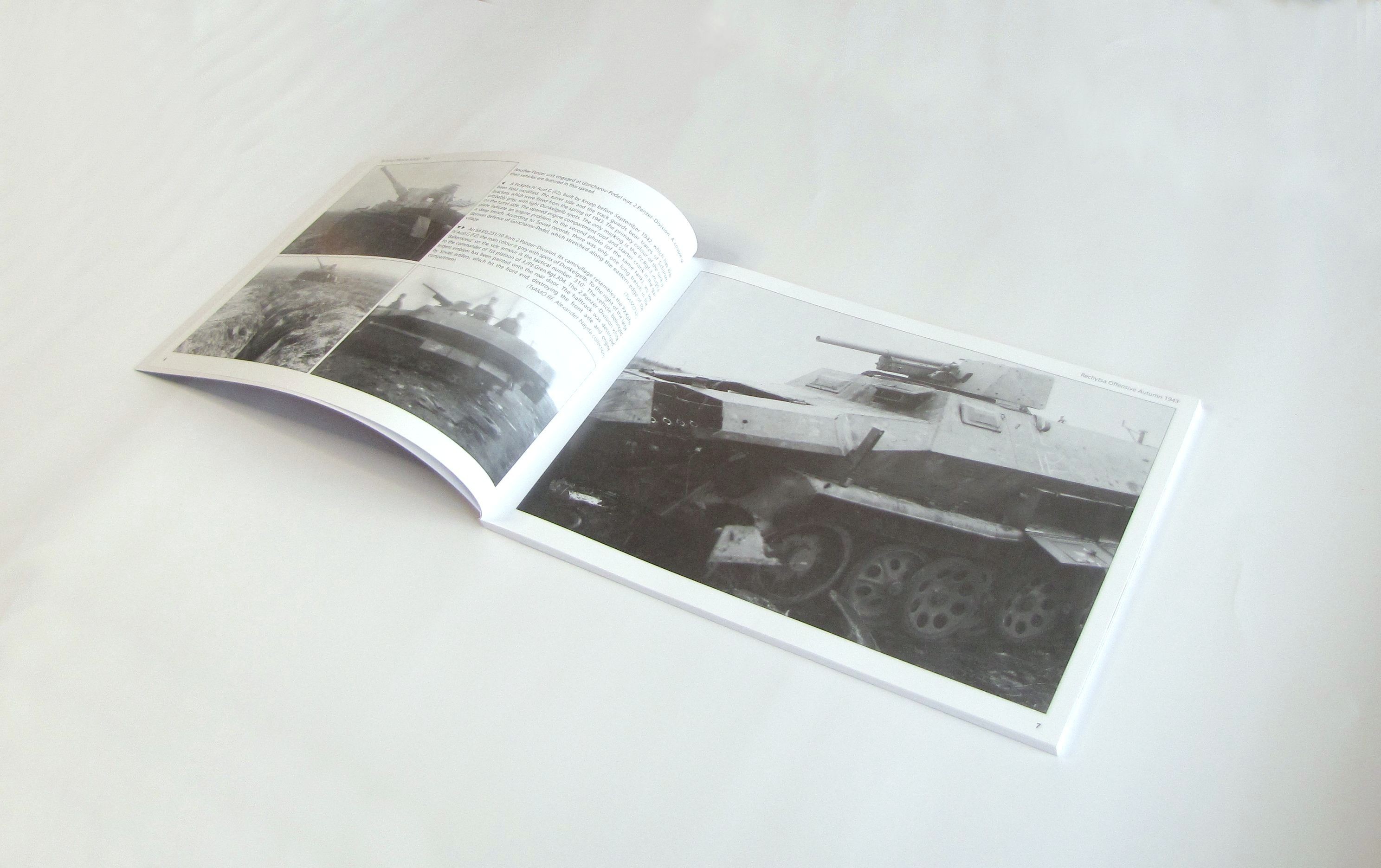 The section about the s.Pz.Jg.Abt.519 is different because it has photos of the vehicles, Nashorn and half tracks, still in service with their German crew.

The rest of the sections cover a good variety of vehicles, including Panzer III, IV, Stug III, Marder, Sd.Kfz. 251 and more, and even some rare ones like munitionspanzer.

As the book covers one year of operations, there are photos in snowy, muddy or dusty environments.

The text is kept to a minimum, with a brief introduction on the first page and then only captions for the photos, which on the other hand are extensively detailed and offer all information that the expert eye of the authors can gather from the photo. Often they identify the precise variant of the vehicle, making clear the deep knowledge of the authors. 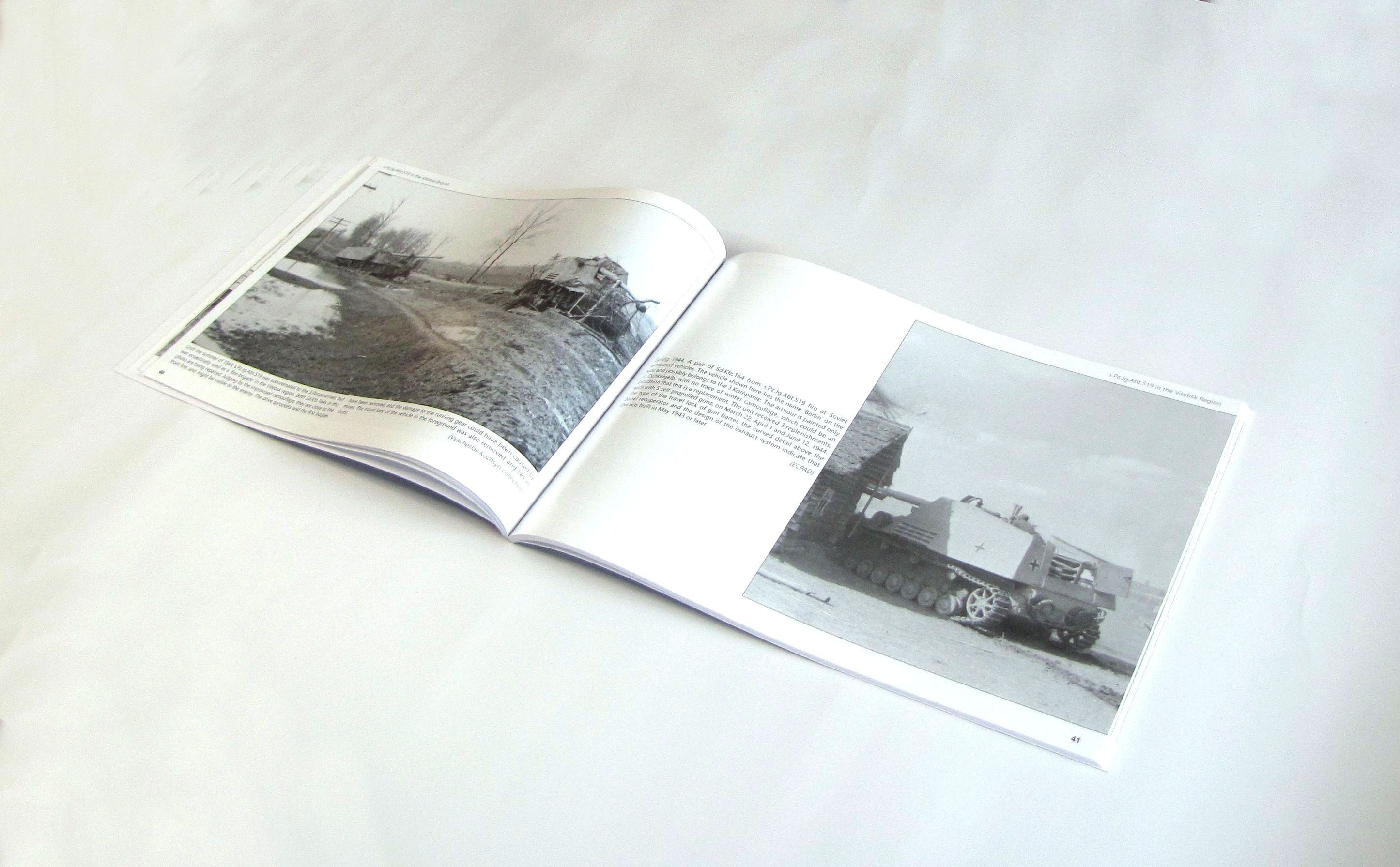 The photos come from different Russian sources and all are new to me. They are clear and crisp, and have been nicely reproduced.

They really benefit from the large size printing, and the landscape format allows for bigger photos, as these are usually shot in the same landscape orientation.

Most pages have a single, large photo on it, the rest have only two so still quite large. Only a couple have three photos.

Usually they show the whole vehicle, but several ones are wider views of the landscape with different vehicles. It is interesting to explore these landscape views because there is a lot of information on them, and often a second or third looks discover new bits unnoticed before. Given the large size of these photos, it can be done effortlessly and without magnifying. 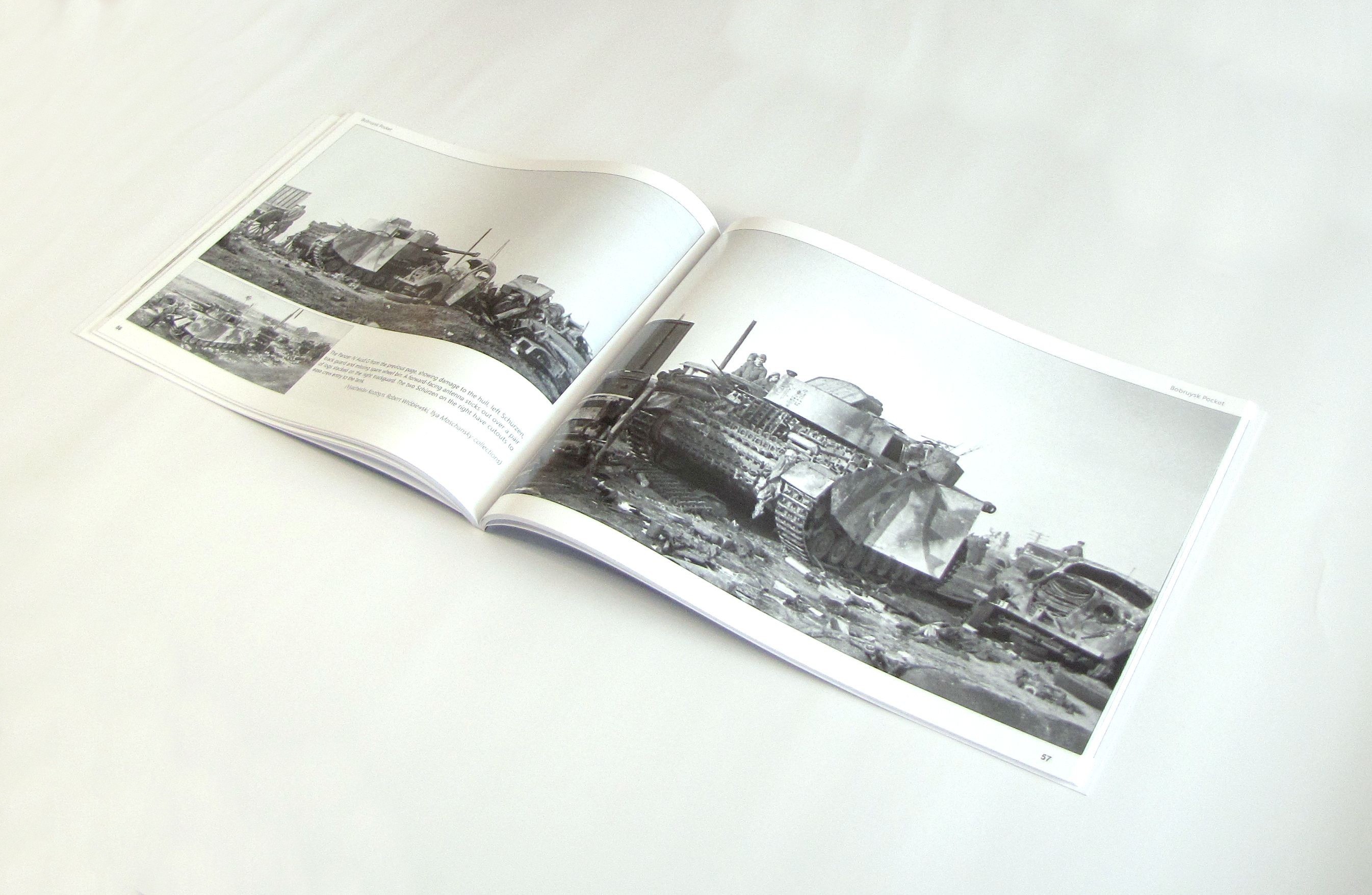 All in all, a lot of details can be seen from the pictures and often, there are several photos of the same vehicle from different angles. This allows to see more details of the camouflage, markings or the variant.

There are also series of the same area, showing photos with different vehicles that were knocked off together.

As for illustrations, this volume has only a few illustrations, as the book is focused on photo content. The two full page drawings are very good art rendering of photos, which are shown aside. We can find also some smaller ones, detailing unit signs and providing colour information. 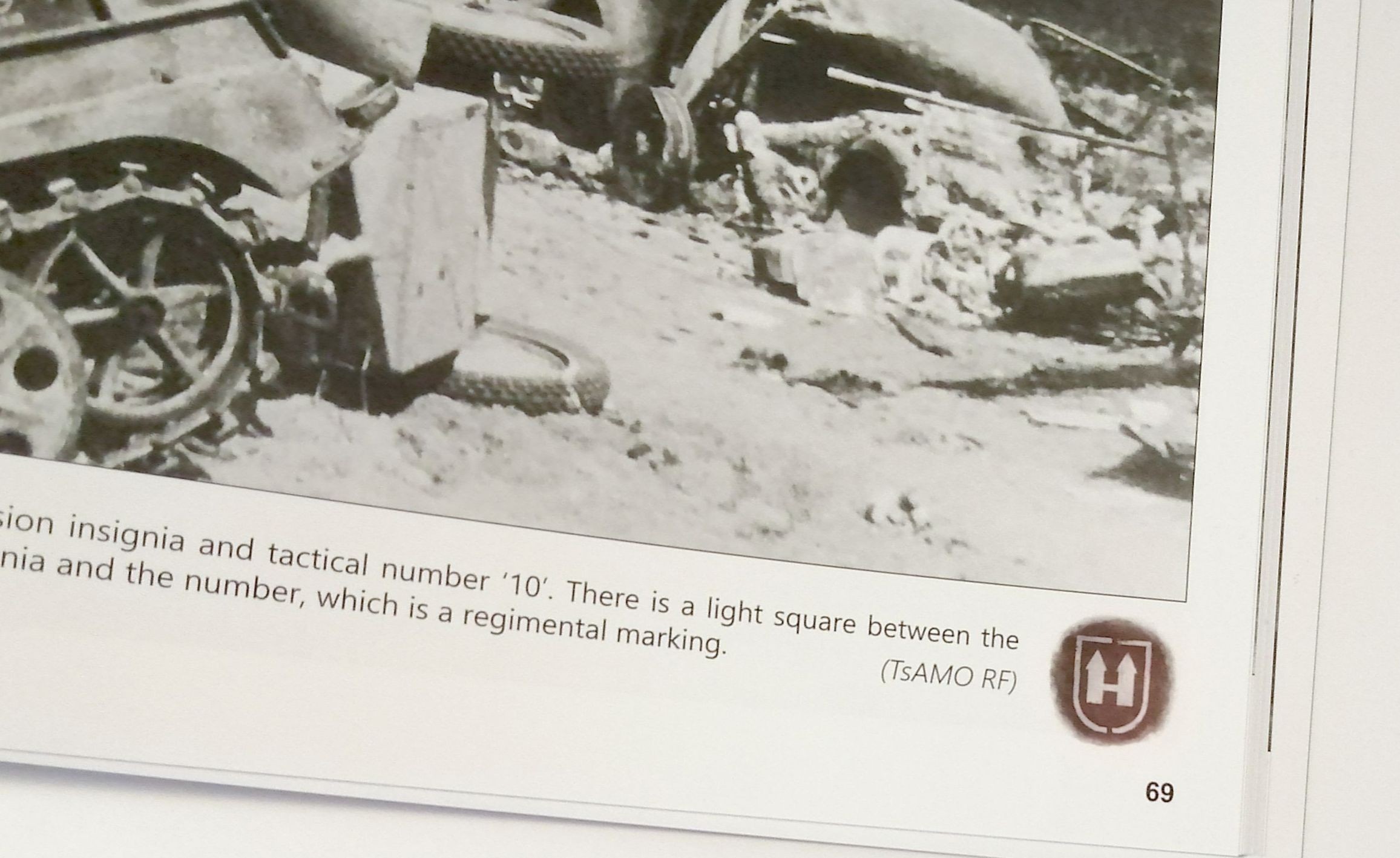 In summary, this is an excellent collection of good quality photos, printed in large size and with detailed captions. On the plus side, having different views of the same vehicle is an interesting and helpful feature. Also the inclusion of photos of tanks still in service, undamaged, is worth to note.

Fans of the Eastern Front and German WWII armour in general will be pleased with the variety of vehicles shown, so as the precise captions.