JPTRR
Editor
posted on 1 year ago — updated on 3 months ago
2,374
views
German Tanks in Normandy 1944, The Panzer, Sturmgeschütz and Panzerjäger forces that faced the D-Day invasion - a new book from Osprey publishing LTD, the 298th title of their New Vanguard series. 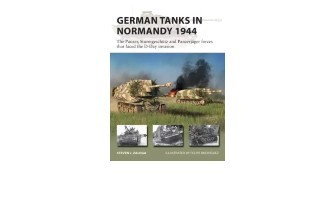 German Tanks in Normandy 1944, The Panzer, Sturmgeschütz and Panzerjäger forces that faced the D-Day invasion

German tanks in Normandy 1944 is a new book from Osprey publishing LTD, the 298th title of their New Vanguard series. Authored by Stephen J. Zaloga and illustrated by Felipe Rodriguez, it is 48 pages in length including index.  Available in softcover, PDF and e-book, the soft cover is catalogued with ISBN978-1-4728-4320-3 and Osprey’s Short code: NVG 298.

Osprey writes about this product:

A new study of the German Panzer forces that stood between the Allies' D-Day beachhead and victory in World War II - how they compared, how they were organized, and how they fought.

The German tank forces in Normandy in June-August 1944 had the advantage of fighting on the defensive side, as well as comprising of some of the most powerful and advanced tanks used by any side in the war. Yet success in tank warfare depends on many things beyond technological superiority. This book describes the types of tanks, tank destroyers and assault guns used by the Panzer units in Normandy, how they fought on the Normandy battlefield, and why they were overwhelmed by the advancing Allies. It discusses the organization and equipment of the units, providing thumbnail sketches of basic organization and doctrine as well as statistical data on the types and categories of AFVs in German service.

The New Vanguard Series is not necessarily a battle book, rather an overview of the design, development, operation in history of machinery of warfare.

German Tanks in Normandy 1944 is presented through six chaptersand sections in 48 pages:

Inside the title page is a glossary of abbreviations and terminology, mainly translated from German to the Allied lexicon.

A New Vanguard book is meant to be a concise exploration of the title subject.  It is not intended to provide in-depth accounts of the German panzer force in France during and after D-Day, but rather an overview. I consider them primers to orient and inspire a reader for comprehensive further reading.  And yet, this book contains some fascinating information.  Mr. Zaloga’s photograph captions often include not only the unit of the of the Panzerkampfwagen (PzKpfw), but often the vehicle commander, and even serial numbers.

In The Tanks, Doctrine, and Organization, German tank deployments are compared between the Russian Front and those under OKW (Oberkommando der Wehrmacht, the Armed Forces High Command, which commanded units in western Europe, including Scandinavia.)  I find it eye opening that the shift of tank strength was not to Russia. The paper and actual strength of the various German divisions and sub-units are discussed, as is the general composition of a panzer division, which at that stage of the war was rather short on actual panzers. Unique characteristics of some divisions are remarked upon or described, such as the21st Panzer Division and its uncommon complement of uncommon tanks. Also described in good detailed are the “Becker conversions,” captured French tanks modified for use by the Germans. Compared are a typical panzer division with an U.S. Army armored division.

Most chapters and subsections feature tables supporting the subject at hand. There are almost a dozen different tables that impart information that would probably require several more pages to deliver, such as a British report from 1952 which calculated the effective ratio of Allied tanks required to fight a Panzerkampfwagen IV, Panther, Tiger I or King Tiger, with three Allied tanks: Comet; Sherman; Sherman Firefly.  Sub chapter Technical Factors includes an excerpt from a directive issued to Tiger units in 1944, admonishing Tigers against“prancing around.”

Panzer Operational Doctrine examines and presents how the Germans planned to use their tanks, and how they were actually employed. It discusses the controversy of grouping the armored divisions away from Normandy in a central location to react to multiple possible invasion sites, and Rommel’s view of that strategy.

You can glean some interesting tidbits of information from this book.  The Jagdpanther had a problem with the final drive, and the unit history of schwere Panzerjäger-Abteilung 654 documented how long the final drives would last between breakdowns.  Small-unit Panzer tactics starts with a very interesting remarks by Guderian’s about the different and similarities of small-unit panzer tactics in the west versus the Russian front.  Several other quotes enrich the text.

Next, Campaign provides a narrative of the battles and offensives/counter-offensives that were executed, as well as those that were planned yet never carried out. Losses are often documented. Ultimately, Battle Analysis presents the failures of the panzer force at the operational and strategic level, versus their tactical level. It reviewed are failures in policy and action on the part of the Germans, and assesses how they created such blunders. It also explains the effect that Allied deceptions and the impact the German High Command. The author also considers this history cannot be assessed without understanding the logistics of bringing replacements and spares to the battle zone, as well as the situation of industrial production in Germany.

The informative text is effectively supported by a remarkable gallery of images and data tables. Some of the photographs are familiar to me but many I have never seen before.  Many are stunning with fascinating scenes:

·       Knocked-out StuG III next to a 6-pdr anti-tank gun, two clear penetrations on the lower hull, with the  fighting compartment side peeled back

Modelers should find this a book a bonanza of inspiration and technical sources for dioramas or stand-alone models.  Most photographs are black and white. There's at least one color photo of a preserved tank running at a museum.  Again, captions often include not only the unit the subject was with, but often the vehicle commander, serial numbers, colors,specific dates and details about the scene, as well as identifying the panzer’s executioner or fate.   One surprising caption reveals that the first Tigers lost to American forces in Normandy were due to fire from a most unlikely weapon system. Not surprising, a large proportion of the photographs are of knocked out panzers.

German operational tank strength 1944, East versus West, May-September, the number of tanks in the East, with OKW, and in the Homeland.

Panzer units in the west, June 10th 1944: six Heer divisions and four SS Panzer divisions, a dozen independent regiments and battalions, showing their compliment of various models of Panthers, as well as StuGs, Jagdpanzer IVs, and even captured armored vehicles.

Separate assault gun units in Normandy: six Abteilungs and Brigades by the number of vehicles, and the day of their combat debut.

Infantry armored units in Normandy: 11 infantry divisions including Luftwaffe and Fortress divisions; their complement of Marders and StuGs; the date of their combat debut.

Panzer/AFV replacements in the West: June-August 1944: list of tanks from the PzKpfw II through Tigers; StuG III and IV; Marder III; command tanks and observation tanks.

Tank and AFV types: West vs East, Summer 1944 (as percentages) listing the number of panzers, StuGs and panzerjägers.

Panzer operational rate in Normandy, 1944 of the Panzer IV, Panther and Tiger, June through August.

German vs. Allied tank combat effectiveness: Cromwell, Sherman 75 mm, and Sherman Firefly versus the Panzer IV H, Panther G, Tiger I and King Tiger, at ranges from 300 to 1500yards.

Heersgruppe B Panzer Division strength, August 22 through 23:five SS-Panzer Divisions and three Heers Divisions; the particular day; how many tanks they had; attached infantry units and artillery support.

German AFV losses in the West: June through September 1944, for each month listing the losses of tanks from the Panzer II through various Tigers, StuGs, and Marders, Jagdpanzers and Panthers. It presents the subtotal of panzers, StuGs and Panzerjägers. 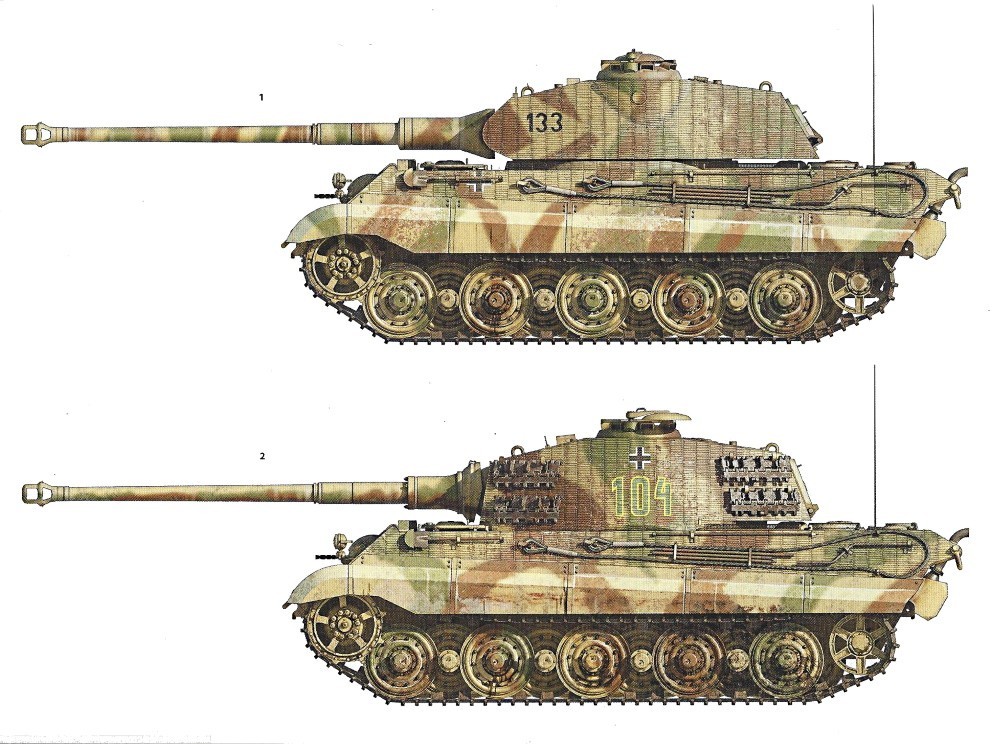 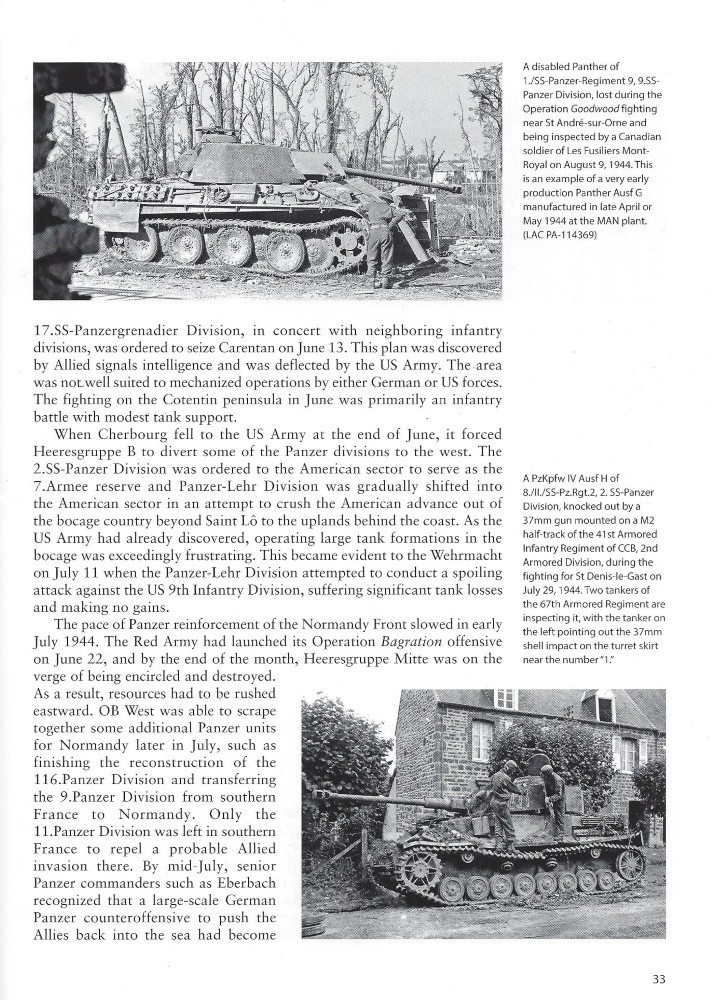 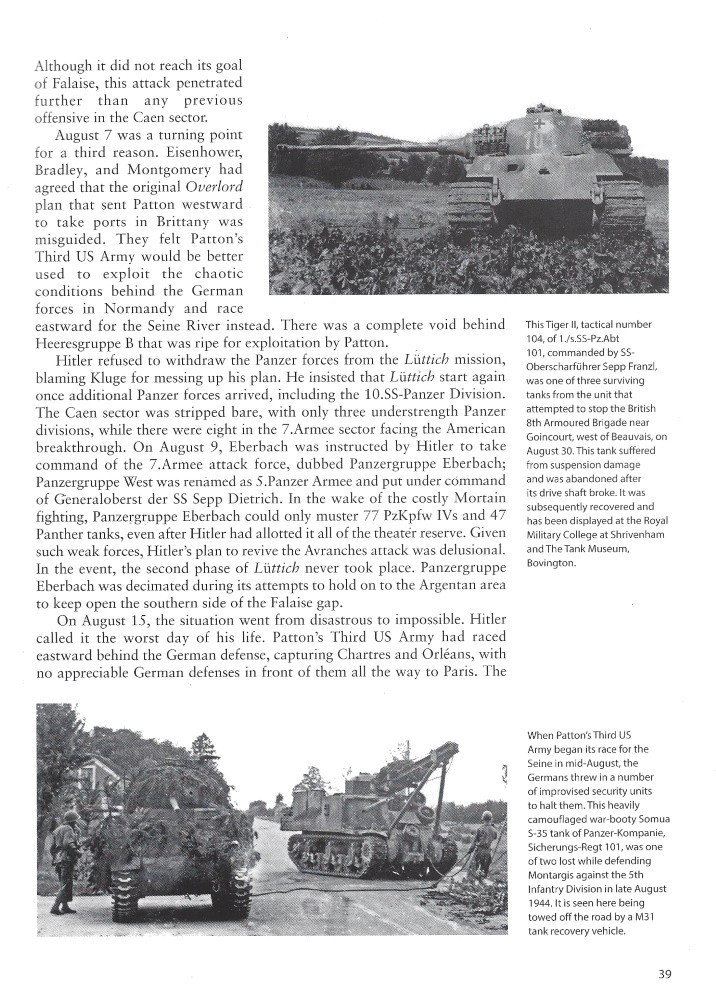 German Tanks in Normandy 1944  from Osprey provides a valuable overview of the panzer forces that opposed the Allied invasion of France.  Modelers should find a wealth of source material to whet their appetite for German armor.  Mr. Zaloga is a highly regarded historian and modeler who loaded the text with excellent information.  The photographic gallery is remarkable, as is the original artwork.  Tables present information in a clear manner that would require many more pages of text to impart.

I have no meaningful complaints about this book and recommend it.