JPTRR
Editor
posted on 2 weeks ago — updated on 2 weeks ago
1,122
views
Unique in Wehrmacht history was Fallschirm-Panzer-Division 'Hermann Göring’. Greenhill Books has published this detailed history of its formation through destruction. 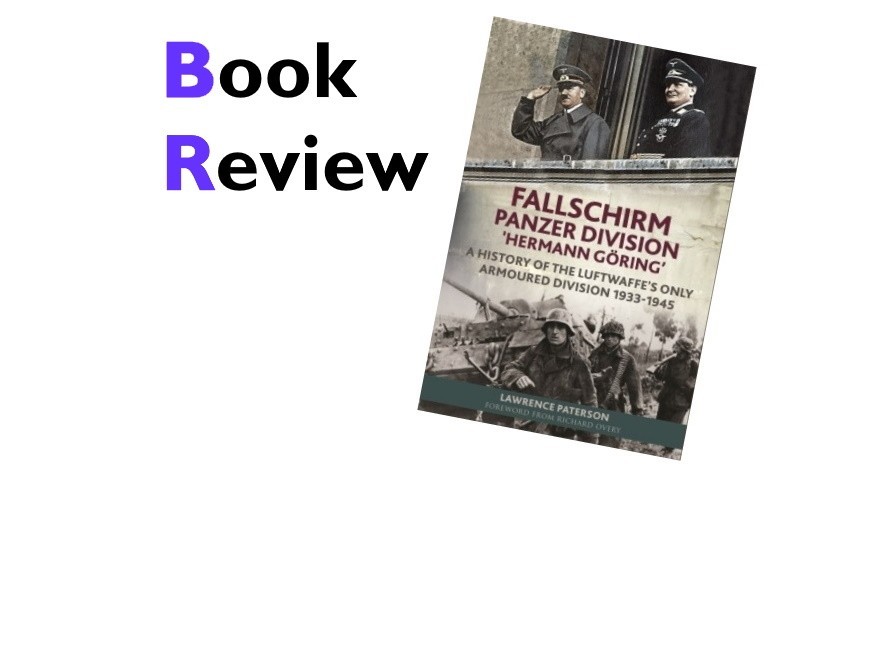 Fallschirm-Panzer-Division ‘Hermann Göring’ was a unique combat unit formed to stoke the ego of Reichsmarshall Göring, intended to be manned with devout National Socialists.  Fallschirm-Panzer-Division 'Hermann Göring’, A History of the Luftwaffe's Only Armoured Division, 1933-1945 presents its history from constitution to combat at the icy Eastern Front, in blazing North Africa, through sunny Italy and north-west Europe, as it established a legendary reputation.  Authored by Lawrence Paterson, this 320-page hardback is published by Greenhill Books and catalogued with ISBN 9781784386108.  Casemate Publishing provided with book and you can see it here on their website.

This book fulfills three important expectations of mine.  It is a detailed history.  It contains first-hand experiences of soldiers and units in daily life and in combat.  As a modeler I think it is brilliant source material for uniforms, insignia, camouflage and markings, and inspiration for modeling ideas.  Read on and I’ll show you why. 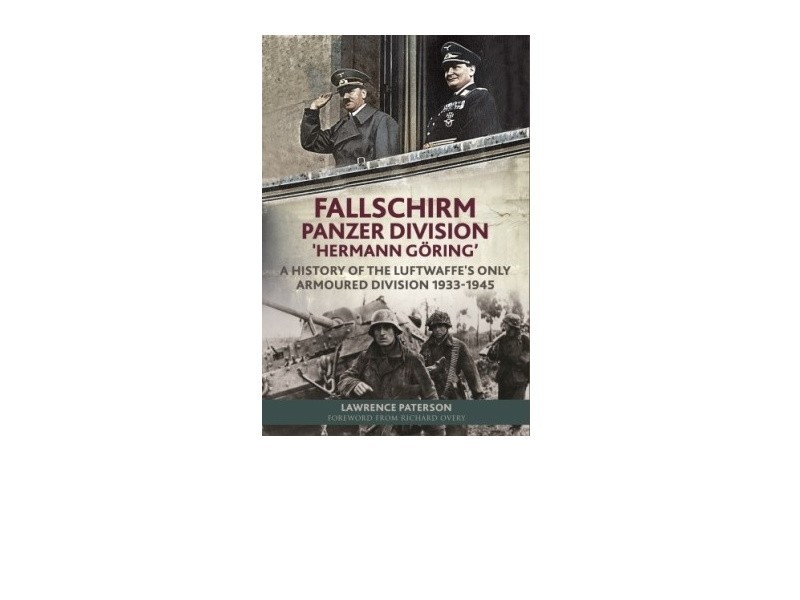 Fallschirm-Panzer Division ‘Hermann Göring’ is 302 pages in length including the index separated in the following chapters and sections:

Chapter Ten From South to East, and East to West

'Hermann Göring’ developed and morphed through a myriad of organizations and deployments.  For simplicity, I will refer to any unit – early through the end - of Fallschirm-Panzer-Division 'Hermann Göring’ as “HG.”

What are you interested in, history or modeling?  Regardless of your primary interest, you probably will find this a book you return to more than once.  One of the high points for me are the images of unique and unusual uniforms and insignias used by Fallschirm-Panzer-Division 'Hermann Göring’ - white color patches, Waffen-SS camouflage and tropical kit to name a few items.  The author describes the various uniforms HG wore (colors and designs) as it was formed and developed from police forces, including cuff bands and other insignia.

Early in the book we are treated to the frequent numerous first-hand accounts and quotes - paraphrasing is not so necessary.  Apparently, a significant number of HG veterans survived the war and the author draws from and abundance of journaled material.  This includes the personal dairy of a Rolf Wallburg, compiled even though it was forbidden when in active duty.

This treatise is eye-opening to me as I knew little about HG other than it was considered an elite formation. Within the first 40 pages I realized 'Hermann Göring’ had a far greater combat history than I have ever encountered.  You may be well versed on HG but a cursory search for books of the subject did not bring up much – a few narrowly focused subjects but nothing as comprehensive as this book.   The author recounts how HG began in 1933 as a formation similar to Liebstandarte SS Adolph Hitler.  It was formed as a small police protective force for the government quarter in Berlin, specifically to protect Reichmarschall Göring.  The Foreword by Richard Overy traces the formation and development of HG, referred to by some as Göring’s “vanity project.”  We learn of the extent of Göring’s involvement and patronship with his namesake formation.   The book recounts the progression of the unit from police into a larger military organization; a fully motorized regiment by 1935, it grew into a brigade in 1942 and built to division status by October 1943, eventually redesignated Fallschirm-Panzer-Division 'Hermann Göring’.  Ultimately it reached korps strength.  We learn of the formation’s relationship with and recruitment through the Weimar Republic, Reichswehr, police, Freikorps, Landespolizei, HG’s purge of the Prussian Ministry of the Interior, and eventual amalgamation of all police forces. HG even incorporated a heavy railway battery.  (What fashionable airborne armored division did not?)  We also learn that as the division expanded, to bolster the division’s strength, outside units of the Wehrmacht were incorporated en masse into HG.

Despite those credentials, it was a peculiar formation.  The author recounts that HG rarely if ever fought as a whole, instead being spread all over the Nazi conquests.  Thus, this book is brilliantly useful in featuring multiple organizational tables.  (See images for an example.)   It provides us with multiple military titles and designations.  Commanders of all levels are often mentioned, including dates of assumption/relinquishing of command, if known, enough to rate a section of the book: Index of Personalities.  For example;

A flurry of changes to the divisional command took place at the end of 1944 and in the early months of 1945. Acting commander Walther departed the division during November after being wounded, briefly replaced by Oberst Wilhelm Soth, a Heer officer, until January when Soth moved on to command the 3rd Panzer Division.

The book is full of first-hand accounts of combats of all sizes, i.e., four-and-a-half pages are dedicated to an account by an Unteroffizier Jägeler of a firefight around Dubno during the four-day Battle of Brody.  Whether he wrote it for his regimental archives or for a propaganda publication, it recounts his 2nd Battery’s fight against T-34s and Kv-1s in a battle that saw the loss of 2,648 Red Army tanks over four days.

Several surprises - for me - are contained in this book.  The first is that elements of HG fought in Operation Market-Garden and ended the war in a festung in the Hook of Holland.  The other is the account of an Eastern Front variant of the Great War so-called Christmas Truce of 1914.  The 1944 ceasefire saw Soviet troops fraternizing with HG troops, who saw it as,

…convenient for us not just because the many bodies in no-man's land that had been bad for our fighting morale were finally gone, but also we were able to repair the front trenches with wood and wicker available at supply points, without being fired at by snipers. As a precaution, the spontaneously agreed ceasefire had not even been reported to the respective commanders, in order not to receive any of their usual orders. We built on our luck and, if necessary, pretended that the war was taking place. When the Commanding General…came to the front lines for inspection on 27 December, everything seemed to be as normal in war.

But we had made a crucial mistake: a single Russian was just over there with a spade and was busily working. We hadn't told him, but now he had to guess, because the general who had just arrived ordered a soldier to shoot down this apparently insane Russian. That was the order.  Courageous Obergefreiter Erwin Roock shot just past him and the commander reprimanded him for shooting 'in the dirt'. However, when the Russian also waved his spade before he went from the parapet into his trench, the general no longer believed it to be a coincidence. The company commander had no choice but to inform his superiors. He reported that the only thing they had agreed with the enemy was to repair the trenches and not shoot at each other during this time and that from tomorrow it would be all the better to go back to war, again. This white lie was pretty good and sounded convincing.

With over 300 pages, there are so many more examples than time and space allow me to present but I will close this with one more, an excerpt about the battle for Cactus Farm in Tunisia;

In the afternoon, the enemy attacked in several waves, supported by tanks. They managed to penetrate in places; however, this time, Tiger tanks arrived on the scene, just in time. It was sheer hell. It was night before we were in control of the farm again.

In the early hours of 30 April, British infantry and tanks came in force and penetrated our positions. Desperately we defended ourselves. Again, we requested our own artillery to shell our positions. A lone Focke-Wulf 190 flew in to our aid and destroyed a tank through a direct hit with a bomb. In the afternoon, the enemy sent over a man protected by a white flag. He asked us to surrender honourably. He did not get a reply and departed. This was followed by a large British attack. Our positions were penetrated in places and only after more hand-to-hand fighting, destruction of tanks by 3 kg charges, magnetic charges or Molotov cocktails, did we succeed in regaining control of the situation.

By the evening of 30 April, a new defensive line had been completed and HQ ordered us to leave Cactus Farm and take our place in the new line. We left the farm under cover of darkness. To our knowledge there were over 300 British soldiers who lost their lives and 30 tanks or armoured vehicles littered the battleground. We had lost three men killed.

The Jager withdrew north to new defensive positions around Massicault (now Borj El Amri) only 30 km southwest of Tunis. A Leutnant who had arrived on the penultimate day of their stand at Cactus Farm with orders from regimental headquarters to hold for one more day counted 37 destroyed enemy tanks and an estimated 400 British dead littering the battlefield. He recommended Schafer for the Knight's Cross, which was eventually awarded on 8 August 1944, by which time he and his men were prisoners of war in the United States, Schafer being held at Camp Harne, Texas.

No original artwork is part of the graphics of this book.  Several pages of photographs allow us a glimpse of HG.  Photos include formal portraits, war correspondent propaganda photos, and casual soldier-to-soldier shots.  These span the gamut of portraits, scenes of combat and daily life, at the front or at parade, troops or equipment, and common soldiers or VIPs.  Image quality varies from studio quality through amateur “grab shots,” professional prints through reproductions of newspaper stills or motion picture frames.  Each image is explained by captions of varying detail.  This component of the book is particularly useful for researching HG uniforms and insignia.

Graphics include numerous data tables, many are tables of organization and equipment. 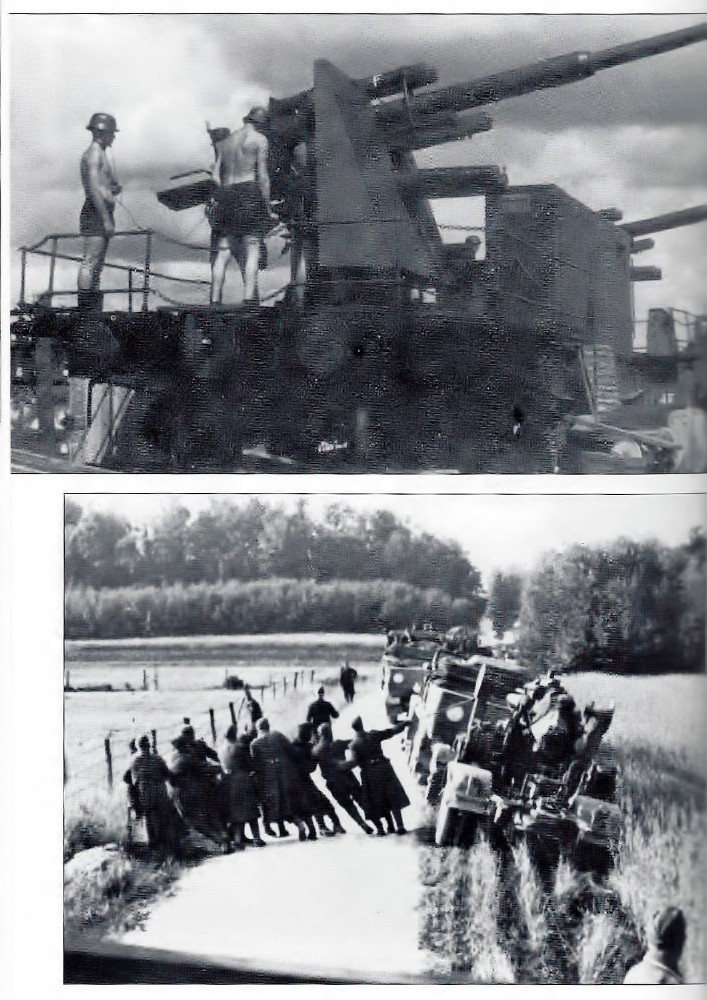 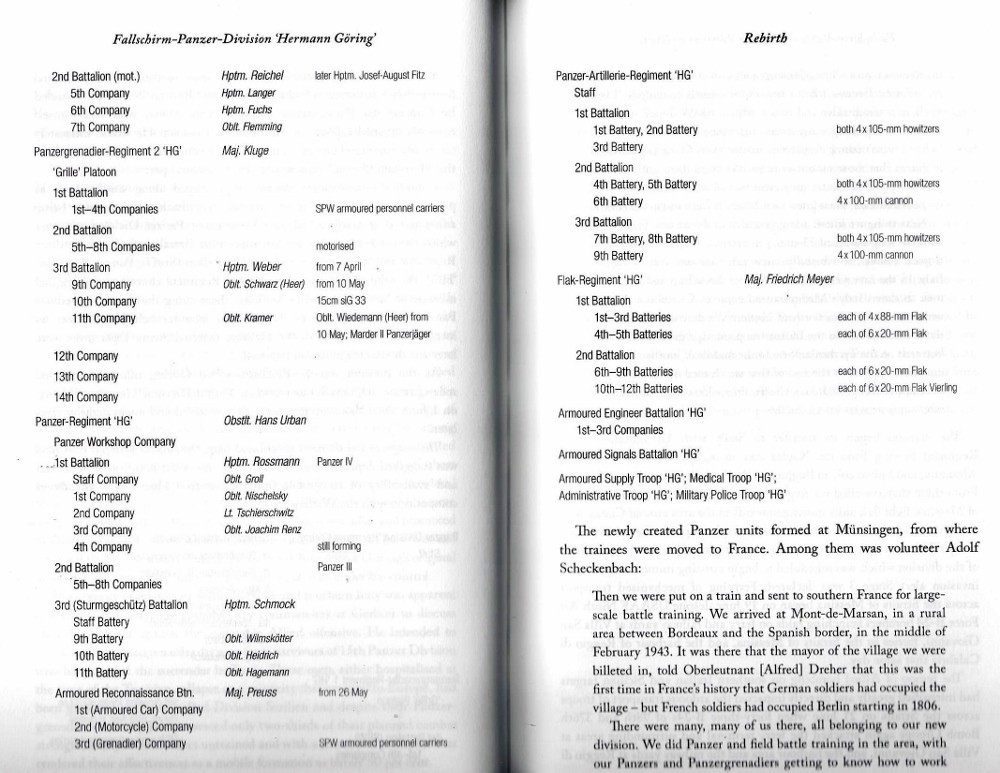 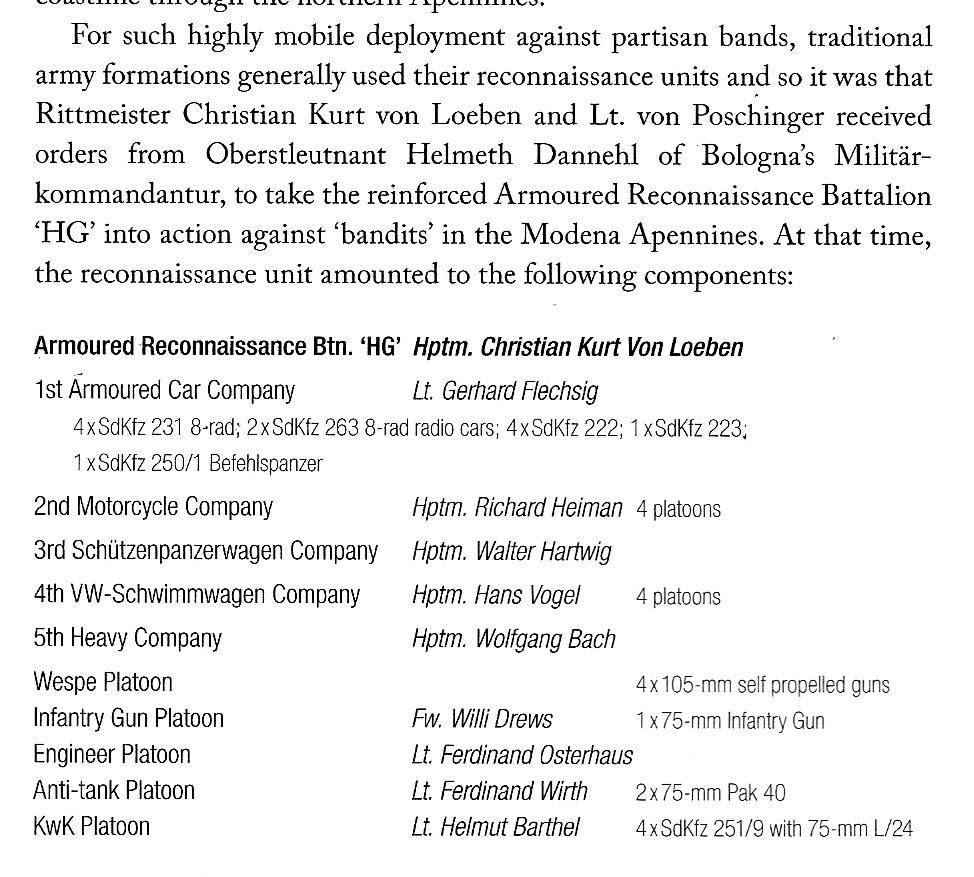 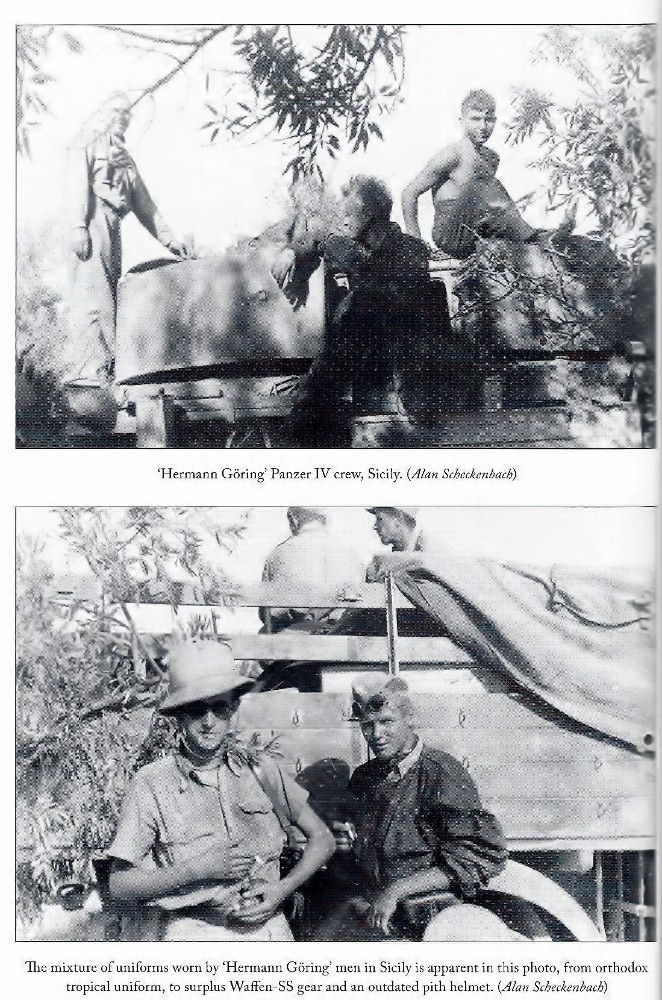 Fallschirm-Panzer-Division 'Hermann Göring’ is an engaging, detailed read that can educate, inspire, and provide source material to modelers of the formation in particular, and the Wehrmacht in general.  The gallery of photographs is particularly useful for researching HG uniforms and insignia.  First-hand accounts provide exciting stories in much of the book.

Whether you want a book to use as source material for modeling, or want a comprehensive history of this unique formation that started as Göring's private army, this book should be a valuable addition to a modeler's bookshelf.

Please remember to mention to retailers and Casemate and Greenhill that you saw this product here - on Armorama.