Valentines from 40 and 50 RTR, 23rd Armoured Brigade. While 40 RTR used mostly red for names, 50 RTR opted for black. The 50 RTR tanks featured were seen at the Tunisian front. Also included are the WDN generics, to fill in any missing WDN needs, the styles common on desert Valentines in both black and white. 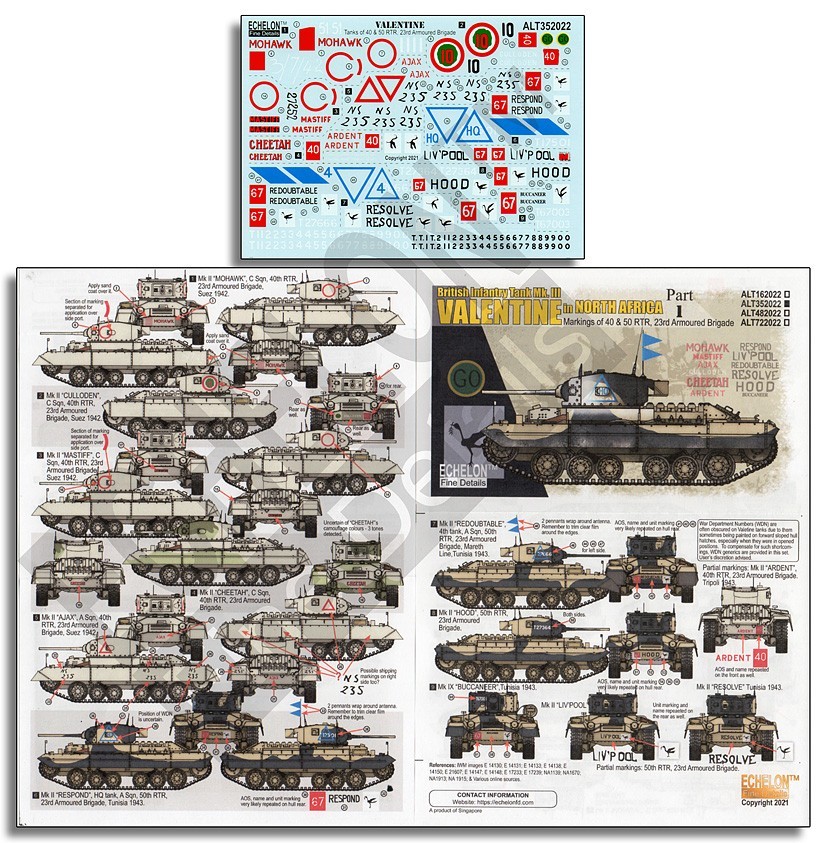 This set feature 8 RTR Valentines. Large, bold allied flashes were a common feature on these Valentines, during Operation Crusader. A few had personalised names painted on the side skirts. On, "HAL II", "the Saint" appeared on the front side skirt. Also included are the WDN generics, to fill in any missing WDN needs, the styles common on desert Valentines in both black and white. 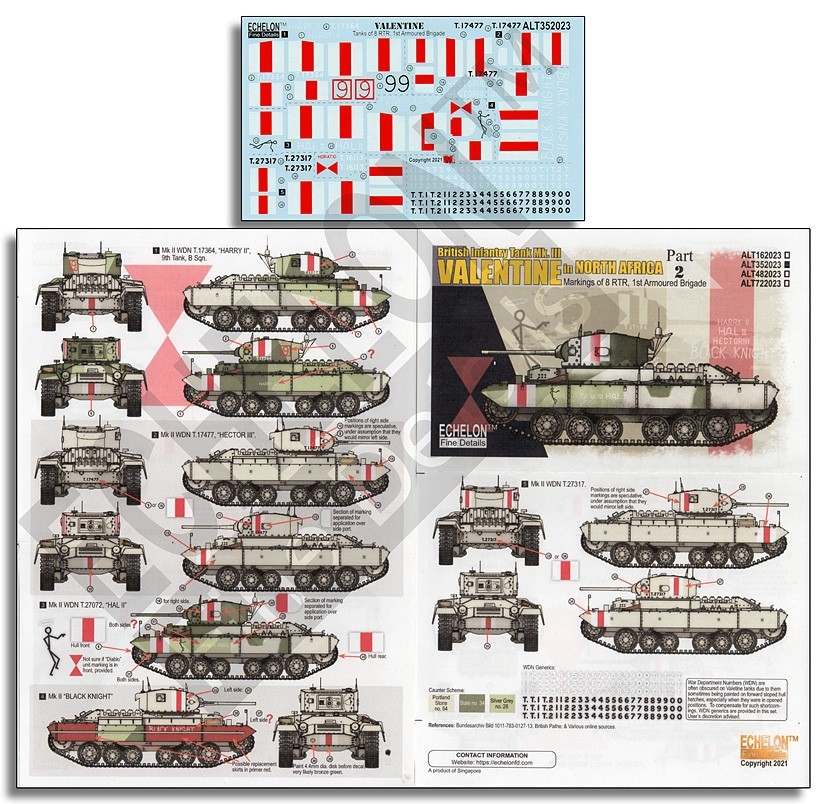 The second installment of Kursk Panther Ds. A selection of 17 specific vehicles, including several Stab tanks and one with personalised name on the front. There should be 3 sets of numbers per tank: left; right; and rear. Not many references show the turret rear of these Panthers, which led the early belief that turret rear do not have numbers. Recent references ran contrary to that belief, cementing the existence of rear numbers. Close scrutiny of the unit emblem, the "prowling panther", revealed slight variations in the stencil across a few turrets. A total of 3 are included in this set. Also an interesting note was the fact that not all of "Batch 2" Panthers had smoke dischargers fitted. Not all had balkankreuz painted on the hulls, and there were several variations of the crosses. There were also digit variations, some slight, some obvious, particularly "4". The rather peculiar styling of "3" also faithfully captured. Fahrgestell serials are also included along with other standard Panther stencilings. Lastly, the camouflage patterns are not standardised across these Panthers - some having thicker camo colours. 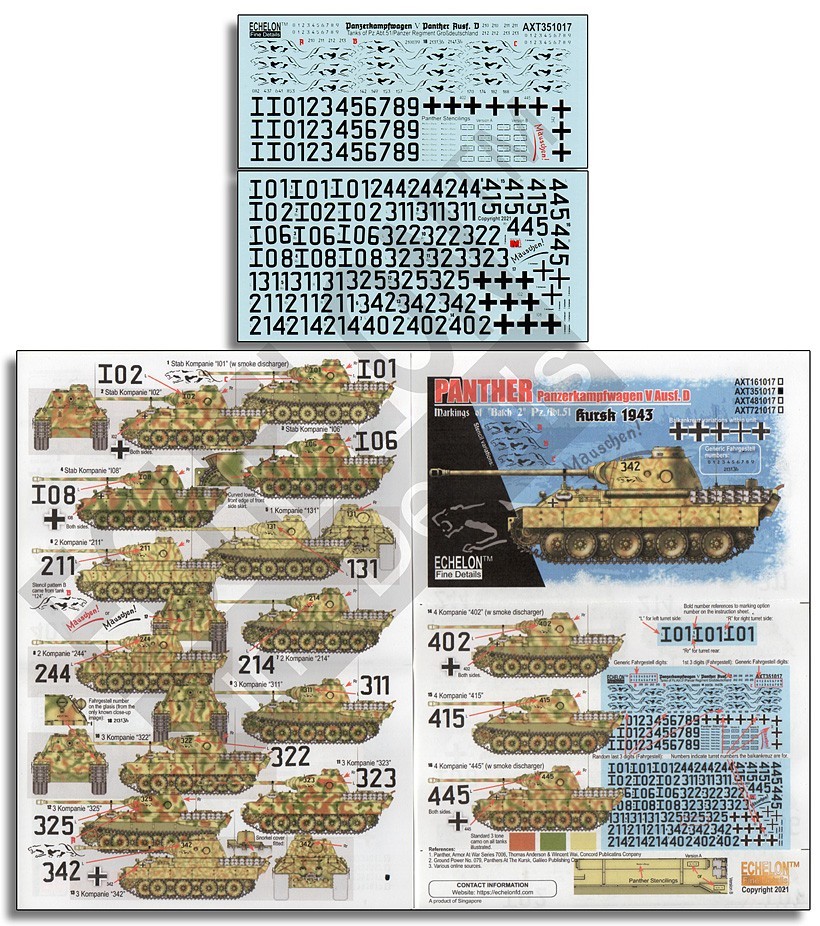 Probably the final batches of Panzer IIIs shipped to DAKs in Afrka. Ranging from Ausf Js to Ns. The tactical markings of this unit is unique, using large card symbols and rings to signify different Kompanies and Platoons. They appear on both turret sides and rear turret bin. 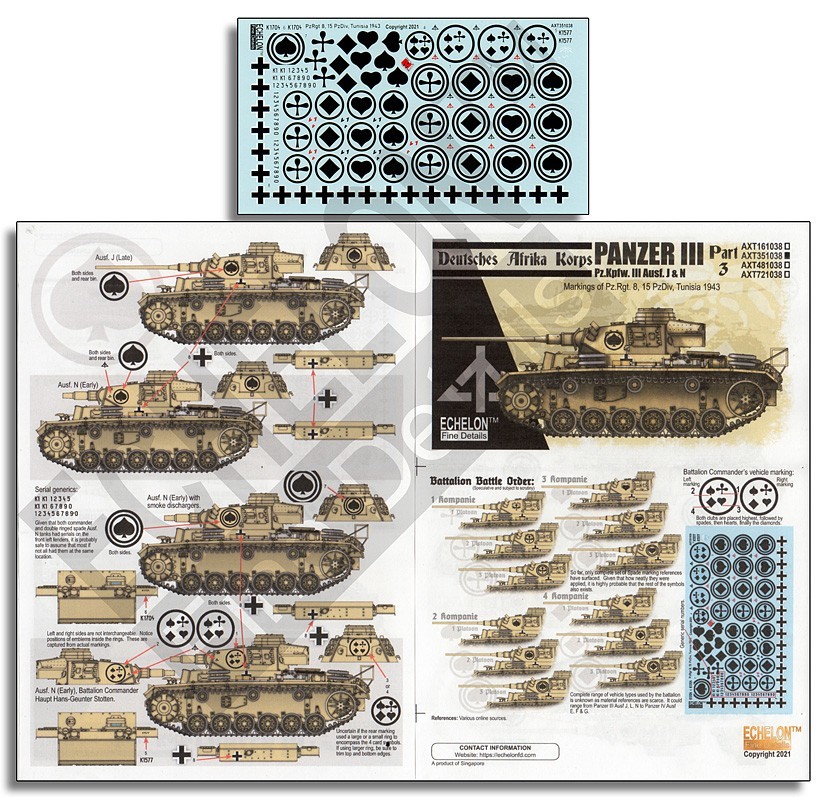 Covers 6 specific Panther Ausf. Gs (early & lates) from 12. SS Panzer Division that saw action at Ardennes,1944 (plus 1 at Normandy). The colours of the numbers are white outlines on black, just like their Panzer IV counterparts in Normandy. Also included are small matching tactical numbers that were painted on tow clevises, "G" and "A" symbols, and hull registration numbers. 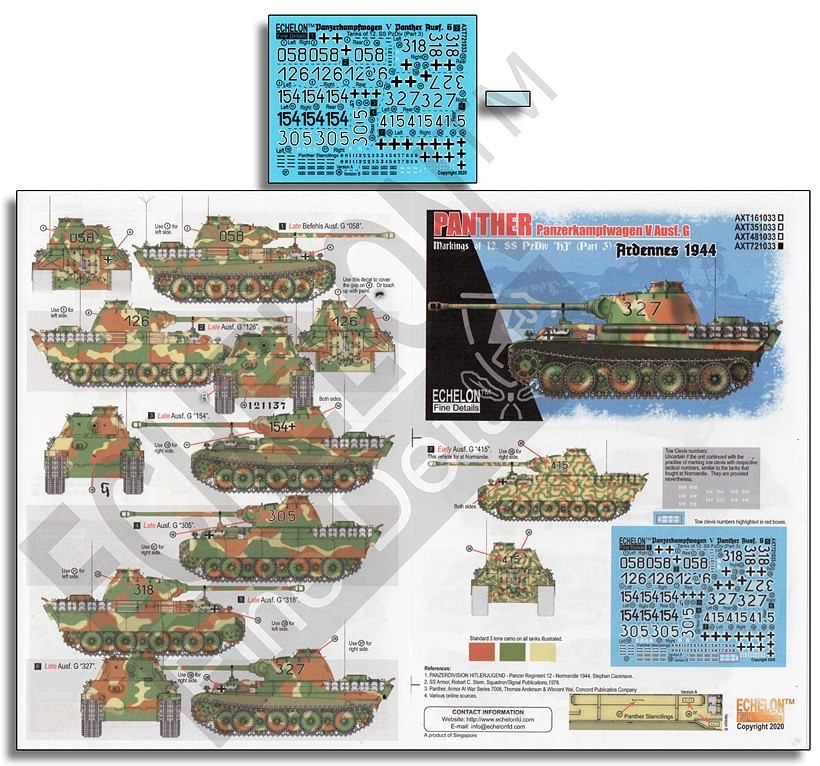 The final installment of LAH Panzer IVs during their last days of WWII, cover 6th & 8th Kompanie Ausf. Js. Not an easy set to cover as information is pretty scarce. Later version of "631" which was lost at Hassoumont was thought to be "601" earlier. The center digit "0" was actually "3". The proof was in the "broken outlines" of both digits and it matched "3" perfectly. "The stenciled "631" and "611" number styles actually matched the LAH Ardennes Panthers styles. The digit "6" is new for this set. Apart from these two, the rest of the turret numbers are pretty much non-standard, very likely hand-painted (common practise towards the end of the war). 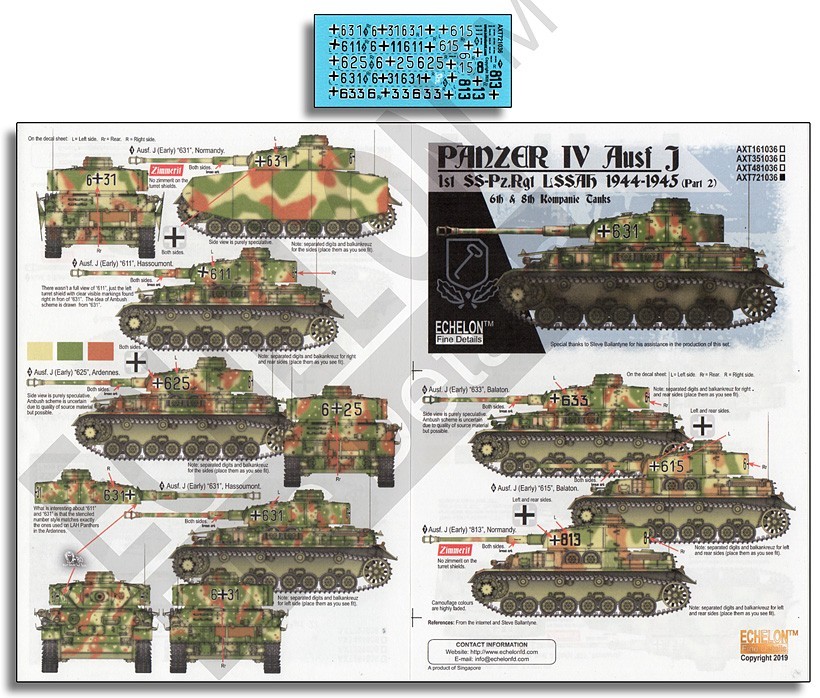 Covers 9 specific Panther Ausf. As & Ausf. Gs from 31. Pz.Rgt. featuring the prominent, late-war styled, red devil's head on black on the turret sides. Comes with complete generic alphanumerics for the turret, for those who wants full flexibility, in both zimmerit edged and non-zimmerit ones. While the specific options will help modellers place the numbers with ease without trying to guess the spacings between the digits. Which you can see can be quite different from tank to tank. Of these, "412" had the emblem uniquely outlined with a lighter colour, very likely red (same shade as the head). The Ausf Gs covered in this set featured both dotted ambush and disc camouflages. Also included are the usual stencils and hull numbers. 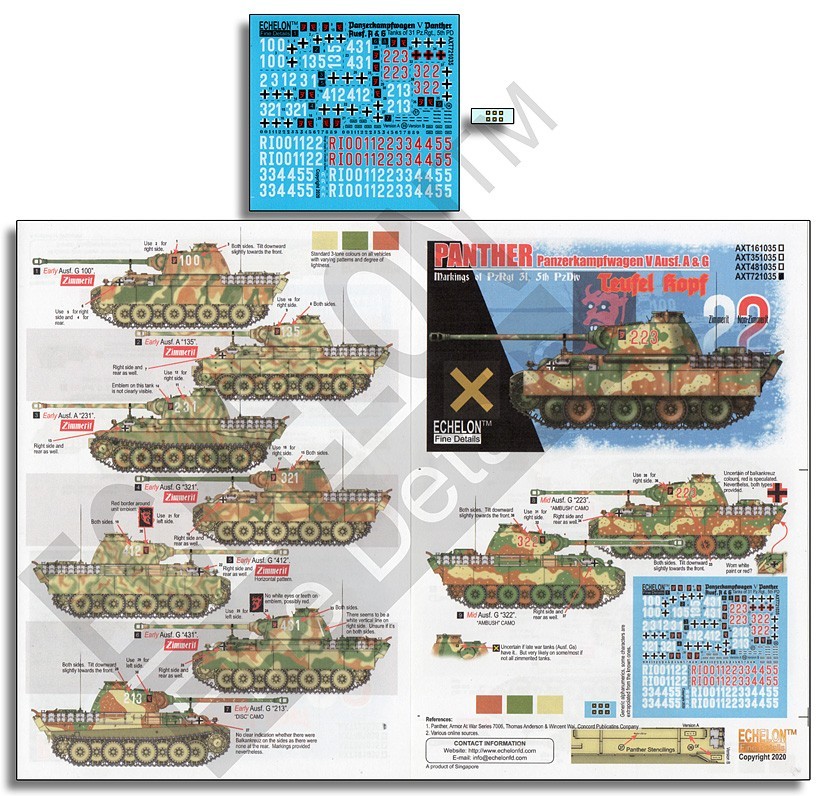