JPTRR
Editor
posted on 2 years ago — updated on 2 years ago
2,177
views
This is a review by Randy L Harvey of Dettingen 1743 – Miracle on the Main
by author Michael McNally and illustrator Seán Ó’Brógáin with series editor Marcus Cowper. 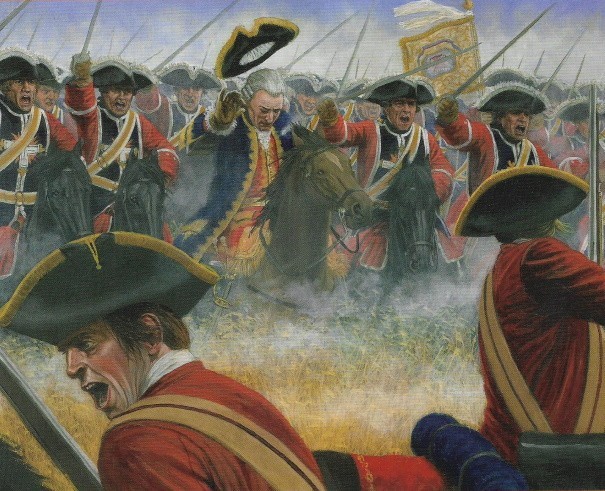 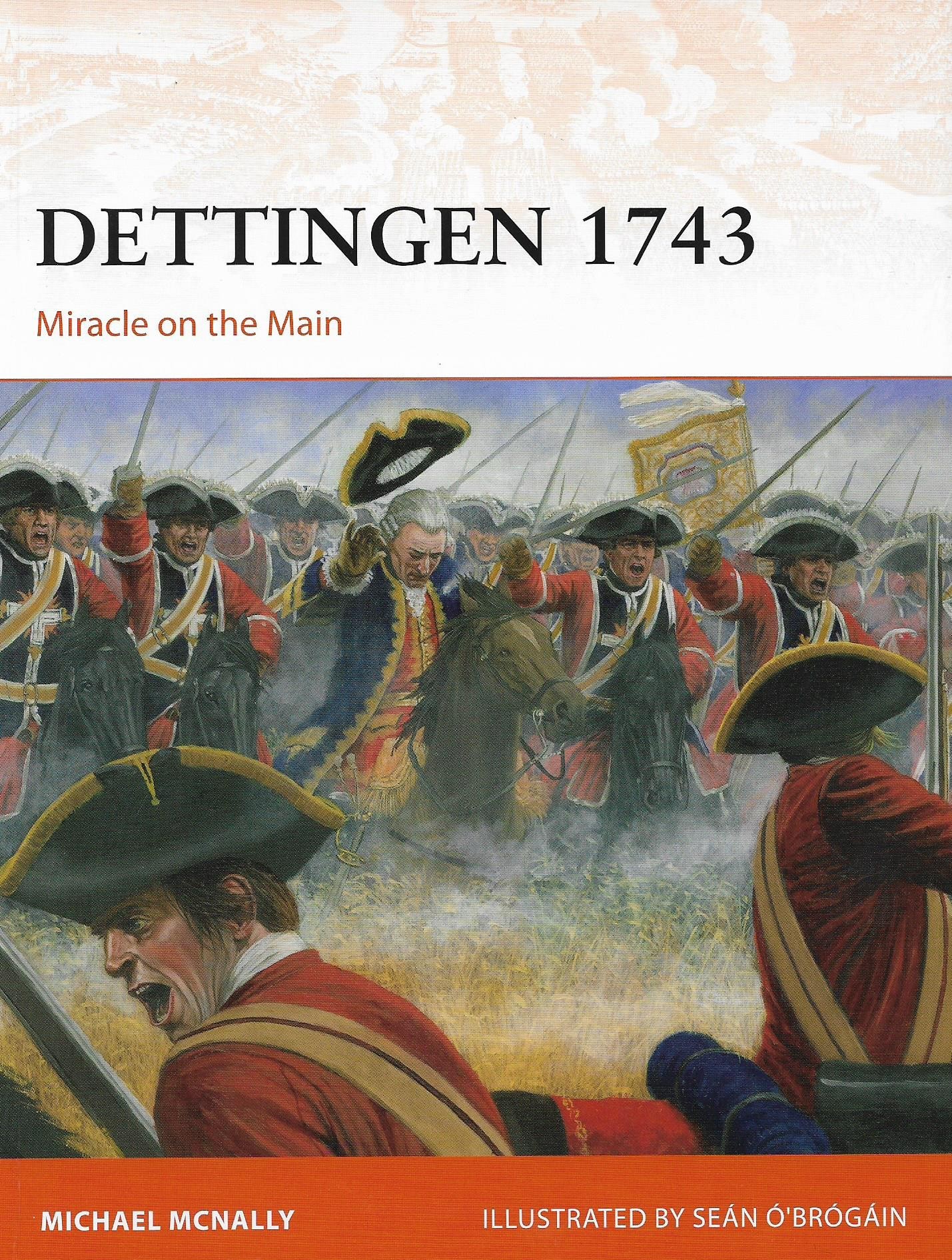 The death of the Holy Roman Emperor, Charles VI, in1741 was the catalyst for the War of the Austrian Succession, a conflict that saw Europe split over the disputed succession to the imperial throne.  In spring 1743, a power vacuum arose in Germany following the death if the Bishop-Elector of Mainz.  The opposing sides sought to take advantage of the situation, with the French sending an army of 70,000 men under Marshal Noailles to occupy the electorate, whilst the Earl of Stair was ordered to consolidate the Allied position in Mainz before continuing southwards to linkup with Allied forces in Bavaria. Noailles set a careful trap near Dettingen on the Main River, intending to destroy the Pragmatic Army as it marched southwards, cutting its lines of supply and seeking to end the war at a single stroke.  This superbly illustrated title shows how the Pragmatic Army began the battle facing outright destruction; but when the tables turned in its favour, capitalized on this, and successfully broke out of the French trap. *

* Quoted from the back cover of the book.

You may view this book on Osprey's site via this link: Dettingen 1743

Osprey Publishing has released Dettingen 1743 – Miracle on the Main as Number 352 in their Campaign series. It is a soft cover book with 96 pages. Included with the text are black and white photographs, color photographs, color illustrations, full color battle scenes, detailed maps, 3-dimensional ‘birds-eye-views’, detailed captions, and more. It has a 2020 copyright, a publication date of August 20, 2020 and the ISBN is 978-1-4728-3680-9.  The book details the command strategies, tactics and battle experiences of the opposing forces throughout the battle of Dettingen in 1743.

Origins of the Campaign

- The Allies at bay

- The die is cast

- The ducks of the main

- A window of opportunity

- The beginnings of retreat

Author Michael McNally gives a well detailed narration of the battle which, with the accompanying maps, helps place the reader at the battle and makes it easy for the reader to understand what took place and why. As well as providing information on the conflict, Michael McNally details leadership and organization of the armies, weapons and equipment used by both sides as well as the fighting techniques of the combatants and their successes and failures.  Also provided are details of battlefield conditions and terrain and how that affected the soldiers and the fighting, and other such details which provides a feeling of what the men were putting up with during the fighting to help the reader understand what took place from the overall picture down to the most minute details. The battles are all discussed from prior to the fighting, to the actions taken during the fighting and the actions and end results after the fighting had ceased.  The text in the book is nicely written and well detailed.  As I read through the text, I didn’t notice any spelling or grammatical errors.  Grammar and spelling might not be an important factor to everyone however it is something that I take notice of and pass on my findings.  I feel that if the text is well written then it shows that the author has taken the time to be a professional with their writing.  Anyone wanting to add an excellent reference and history book on the battle at Dettingen in 1743 to their personal library will be pleased with this very informative and interesting book.

Photographs included that will be of value to the scale figure modeler are full color photographs of reconstructed uniforms being worn by reenactors and on display figures.

Some of these pictures are of the uniforms of:

-         French infantryman of the Royal-Rousillon

A two-page action scene depicting Ducd’Harcourt at the head of the Mousquetaries du Roi leading the French cavalry against two lines of British horse and dragoons. A portion of this illustration is also seen on the front cover of the book.

The Whites of Their Eyes

A two-page action scene depicting Ducde Biron, in command of the French right wing, leading three regiments of line cavalry, spearheaded by the Royal Cuirassiers, in an attack against the Royal North British Fusiliers.

There are three 3-dimensional ‘birds-eye-views’ included in this volume and they are of:

There are 6 maps included in this volume and they are of:

-         The Hapsburg patrimony upon the death of Charles VI

-         The battle deployment, according to British sources

There are 8 individual profiles included in this volume and they are of:

The captions are well written and explain the accompanying photographs and illustrations in great detail eliminating any doubt as to what is shown.  The captions go into very specific detail as to the specific individuals shown, locations and other such pertinent information.  I was impressed by Michael McNally’s captions as they are very helpful to the reader due to their detailed content as opposed to other captions that I have seen that are very brief and lacking in detail.

There are 4 notes included in this volume and they are:

There are 2 informational charts included in this volume and they are of:

Born in London in 1964, Mike McNally is the author of best-selling studies of the pivotal battles of the Boyne and Aughrim and is currently studying the role of the Irish Brigade in French service from the Boyne to Fontenay. The author of several books for Osprey, with his varied areas of interest he continues to research such diverse subjects as Irish military history, the campaigns of Marlborough and the German colonial campaigns during World War I.

Seán Ó'Brógáin lives and works in Donegal, Ireland. He has a BA (Hons) in Scientific and Natural History illustration from Lancaster University and has worked for a wide range of clients. Apart from Osprey, these include the University of Manchester, An Post, the National Museum of Ireland,and the Irish Office of Public Works, as well as a variety media companies,museums, councils, and private individuals.

Osprey Publishing also offers Dettingen 1743 – Miracle on the Main as:

Osprey Publishing’s Dettingen1743 – Miracle on the Main is also available as a Kindle version through Amazon.

This book was provided to me by Osprey Publishing. Please be sure to mention that you saw the book reviewed here on the KitMaker Network when you make your purchase. Thank you.

VERDICT:   An excellent volume by Osprey Publishing.  Definitely beneficial to the enthusiast and historian of 18th century warfare, weapons, uniforms and the battle at Dettingen in 1743. 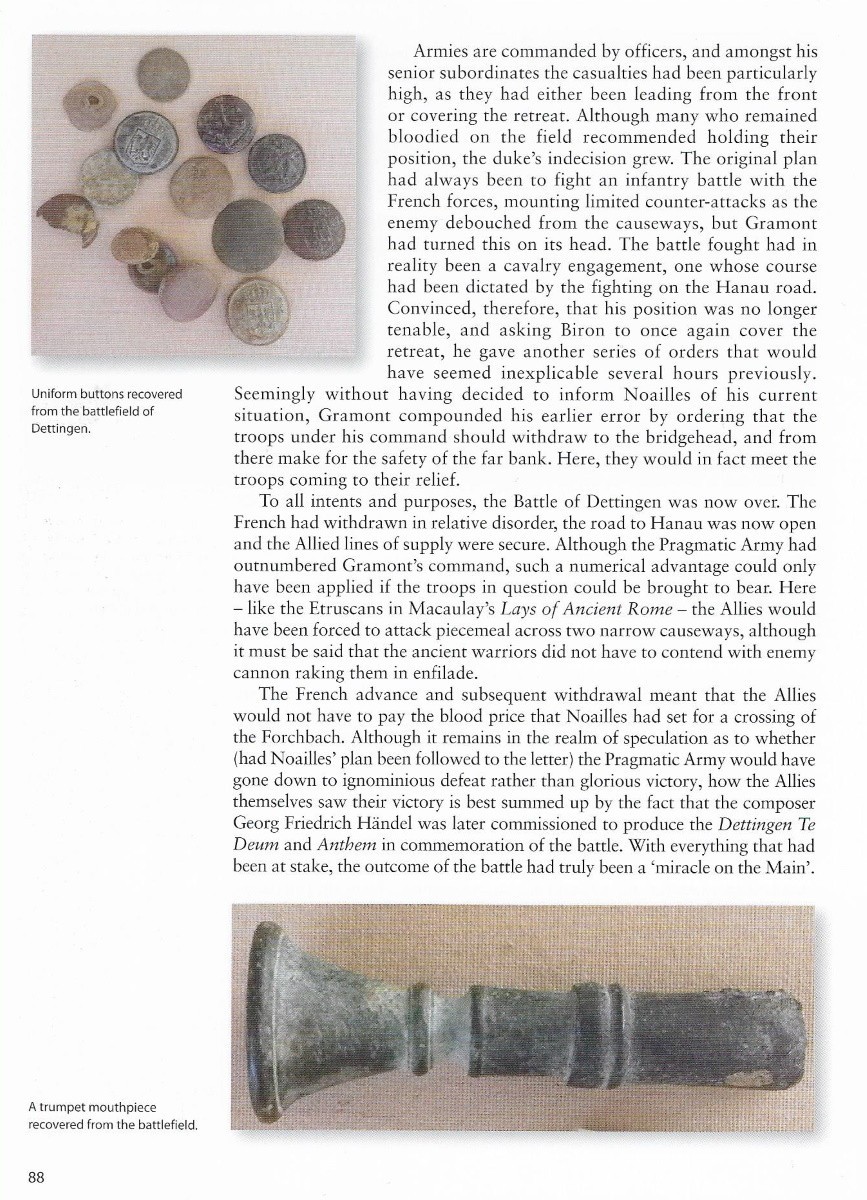 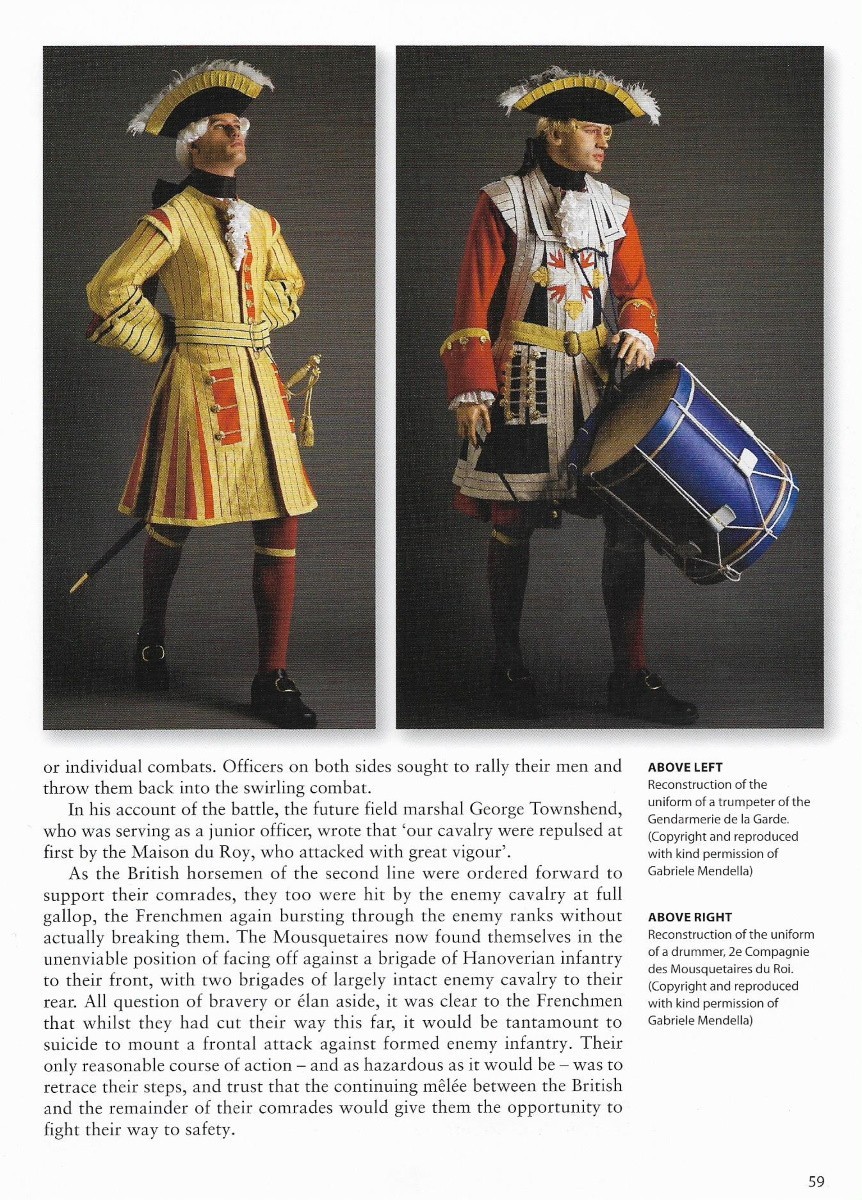 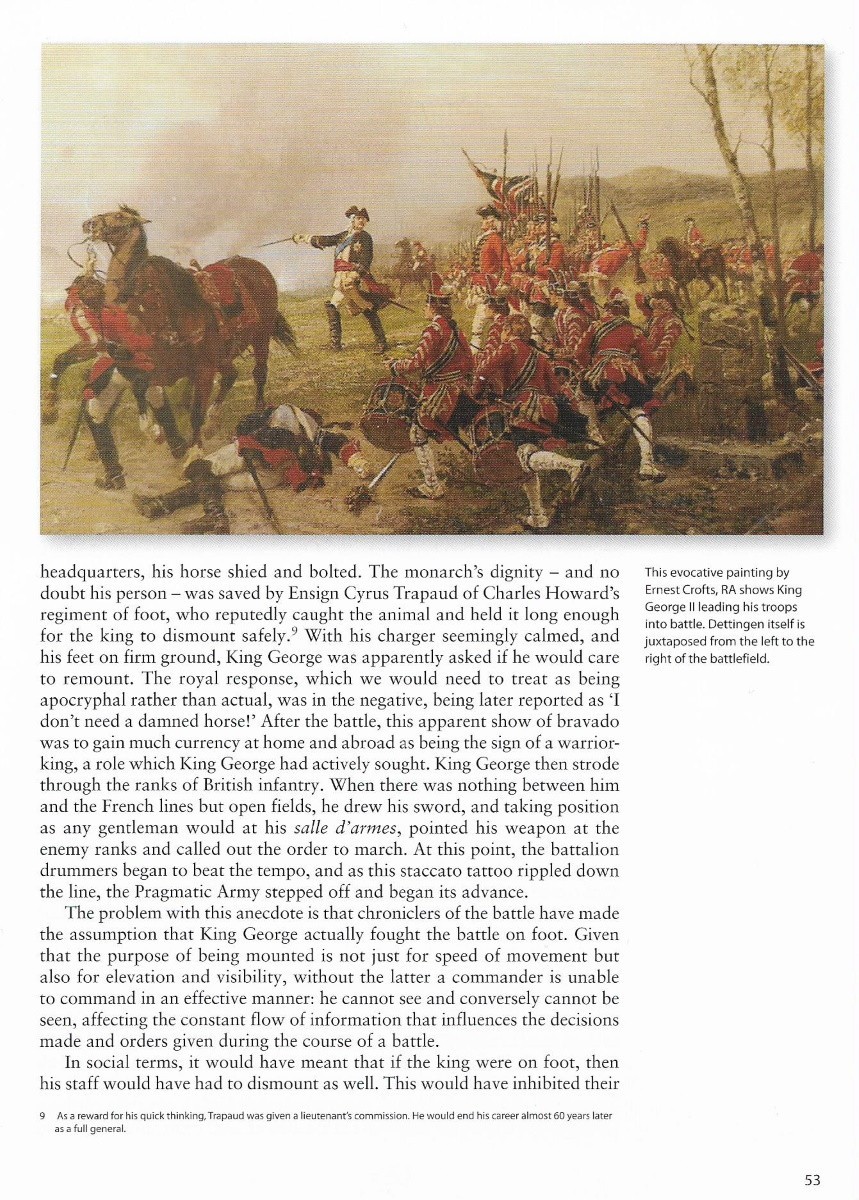 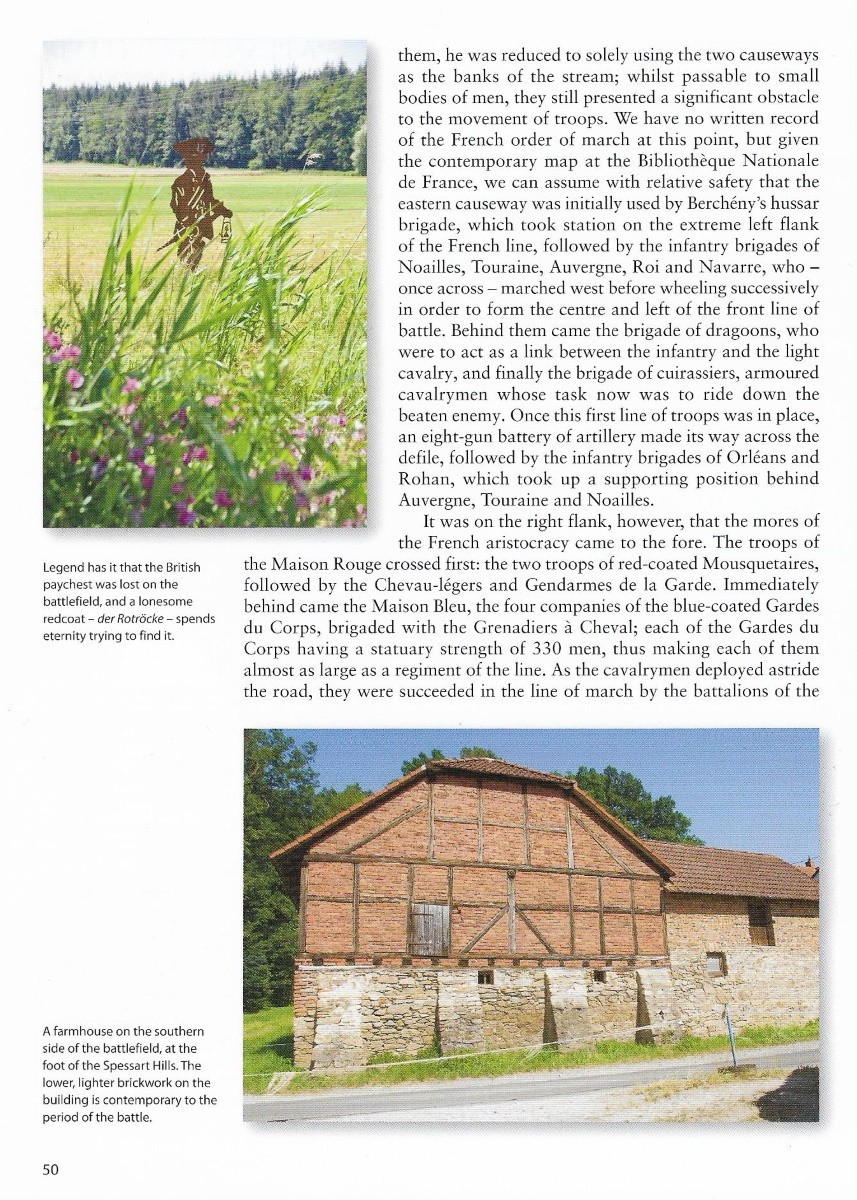 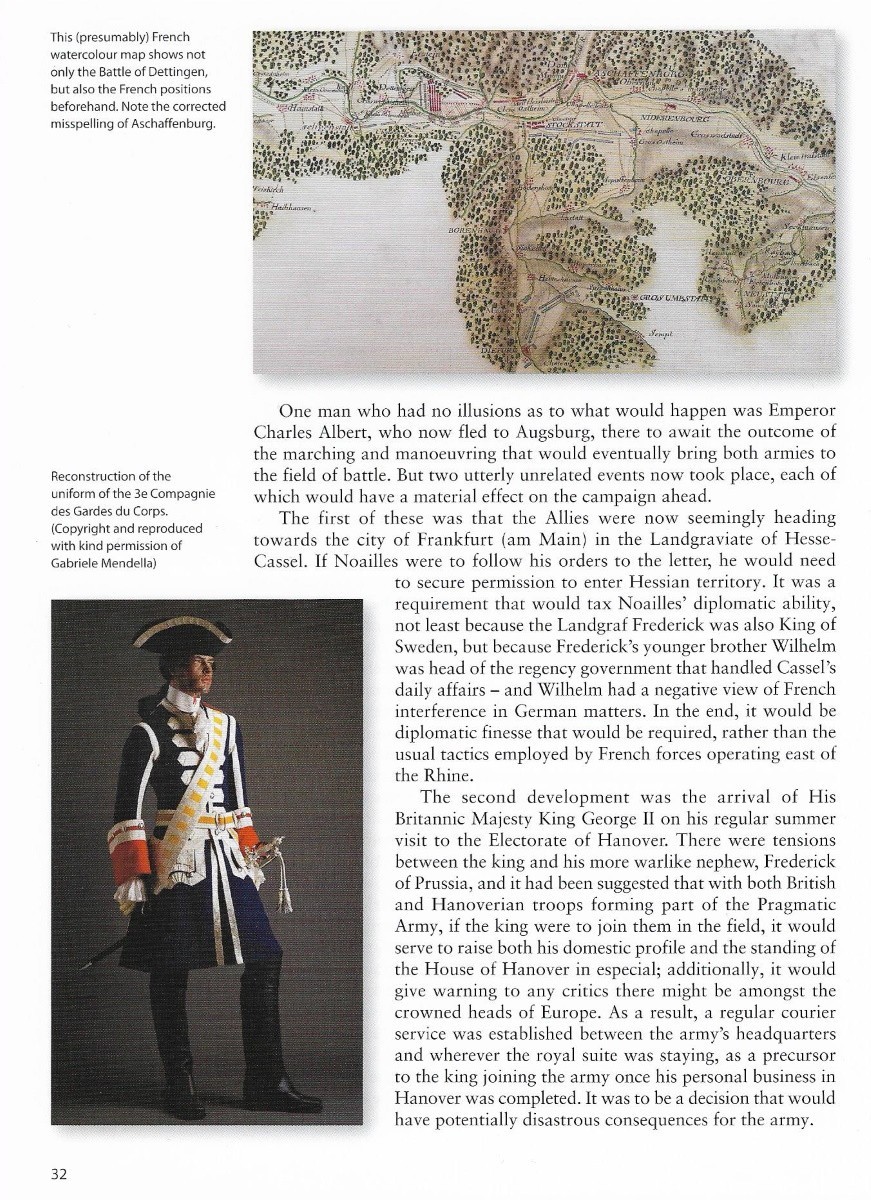 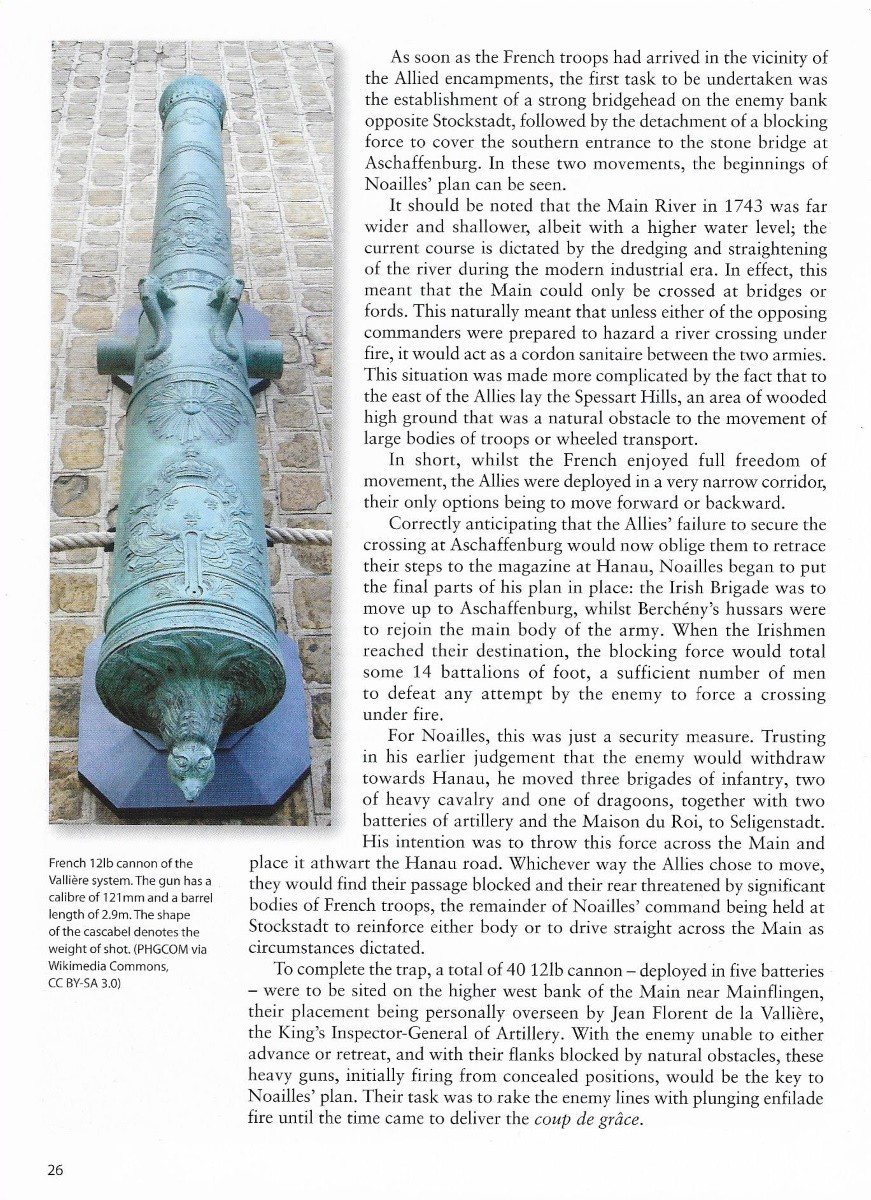 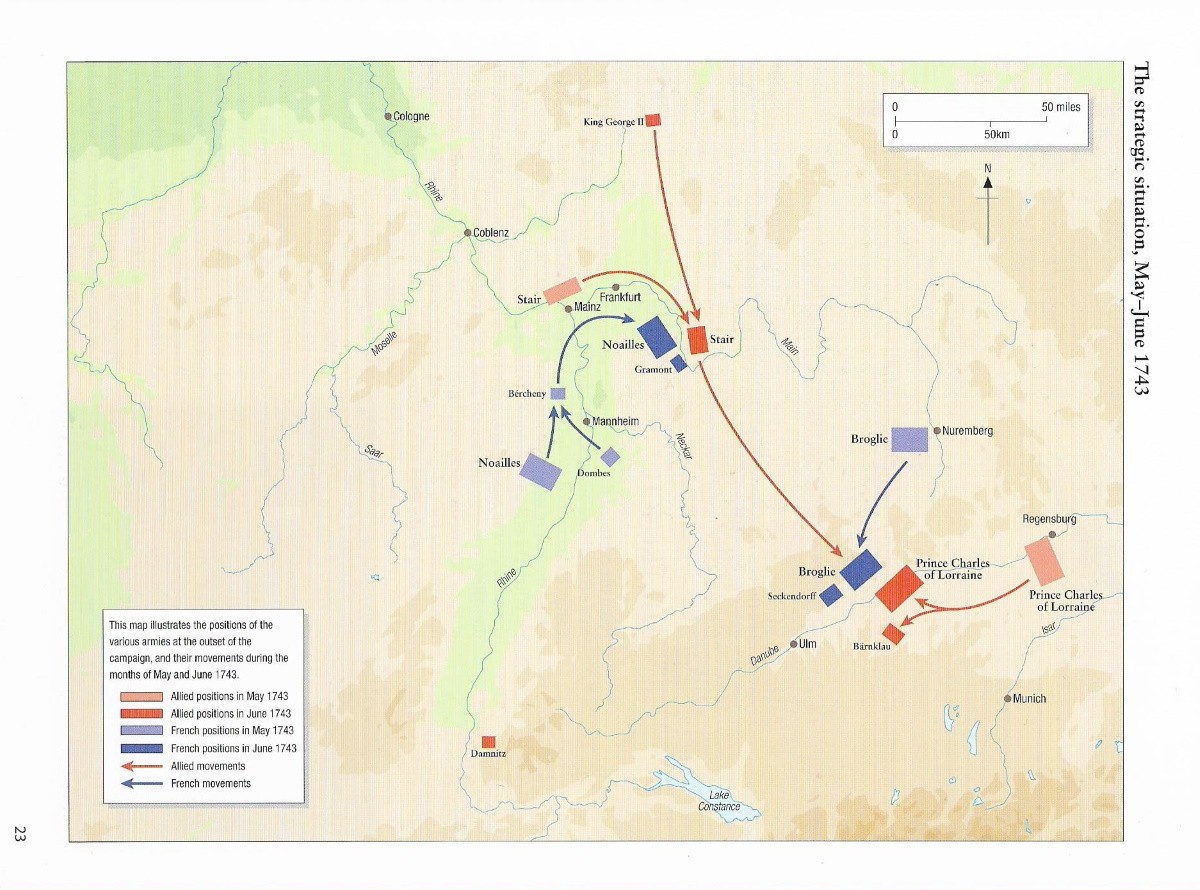 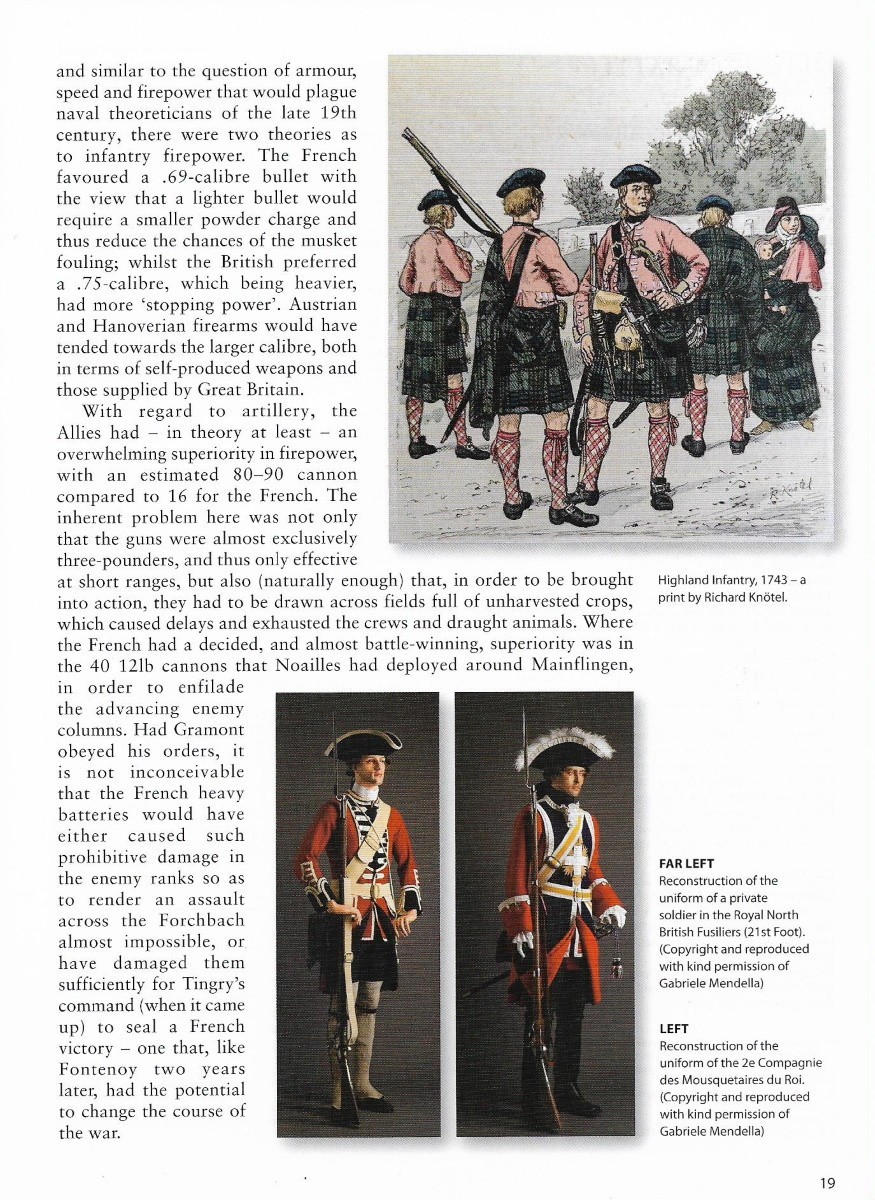