12TH SS Panzer Division Hitlerjugend, From Formation to The Battle of Caen

JPTRR
Editor
posted on 1 week ago — updated on 1 week ago
592
views
12TH SS PANZER DIVISION HITLERJUGEND, FROM FORMATION TO THE BATTLE OF CAEN is a new title from CASEMATE, part of their series ILLUSTRATED. Within 128 pages are 150 photographs, maps, and illustrations. 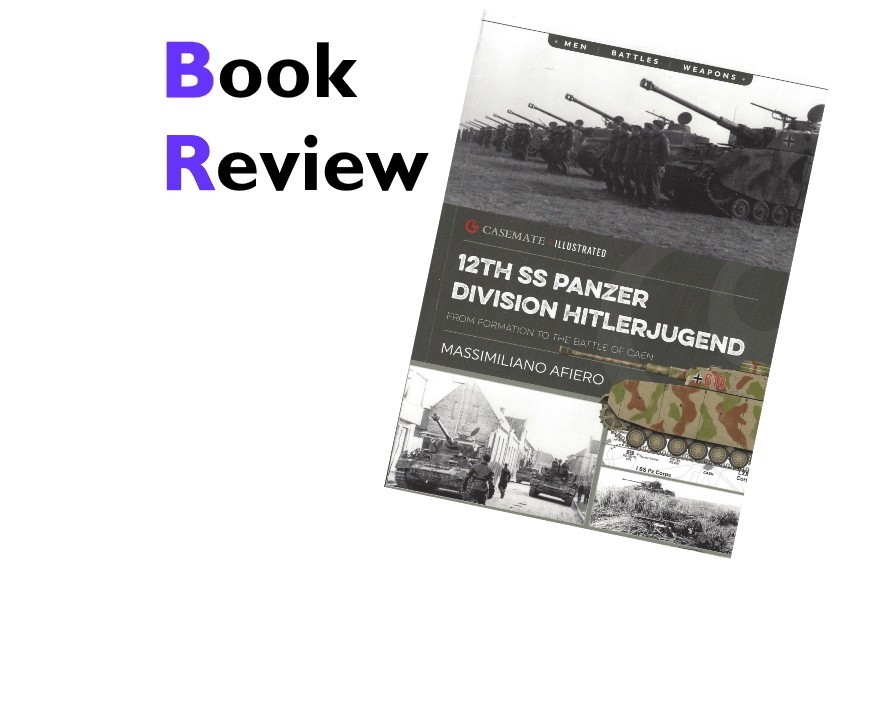 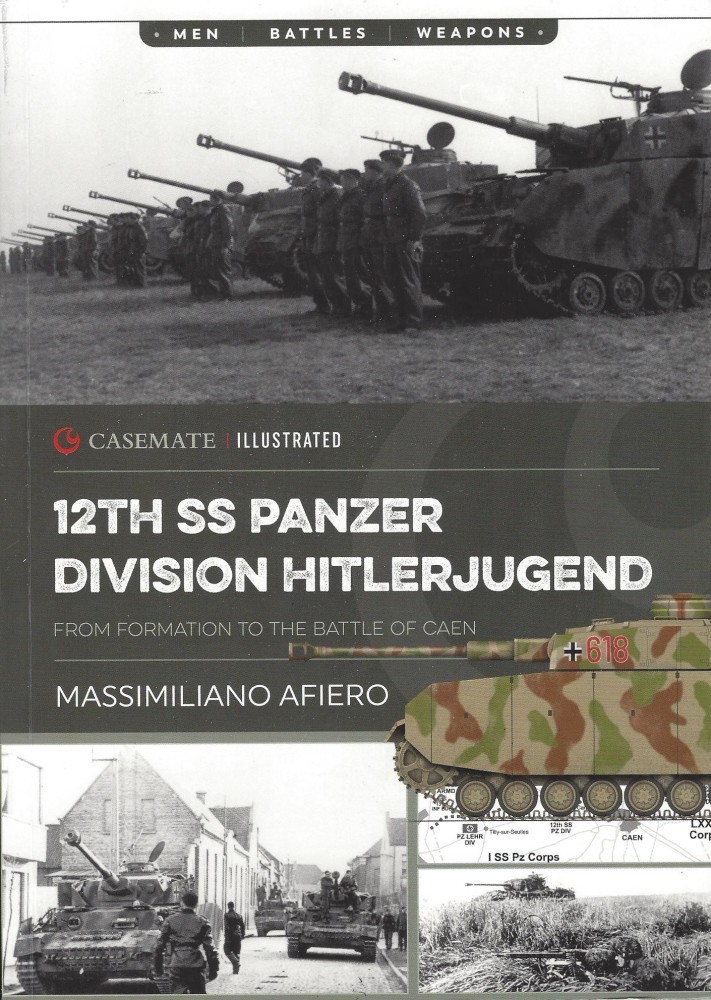 Stalingrad was the disastrous impetus for Hitler to initiate Total-Krieg and 12.SS-Panzer-Division Hitlerjugend was conceived in that mobilization.  12th SS Panzer Division Hitlerjugend, From Formation to The Battle of Caen from Casemate Publishers is the history of the unit in the time frame the title states.  Massimiliano Afiero compiled and authored this history and artwork is by Paul Hewitt.  Within this 8 X 10 inches softcover are a total of 128 pages, with 119 pages of content from the content page through the epilogue.  Part of Casemate’s series Casemate Illustrated, it is catalogued with ISBN 978-1-63624-168-5.  It is the first volume in a history of "Hitlerjugend."

“Hitlerjugend” managed to thwart Allied plans to take Caen for six weeks, even though this was their first taste of combat, and the average age in the division was 18.

Modelers and historians should be able to glean a great deal of technical and operational information from this book; first-hand accounts are particularly valuable.  The wealth of images also provides a treasure trove of source material for research and inspiration for subject matter to model.  If you have ever read that SS in Normandy wore non-standard camouflage from German and foreign sources, you will see examples in the photos; one shows a trio of grenadiers with their awards and two on-lookers, in which I count three distinct camouflage patterns and five different headcovers.

The author composes the story with background and chronological detail.  Each chapter is identified with a colored tab printed on the upper edge of the pages.  Colored callouts highlight significant and unique information, concise biographies, and illustrations.  Biographical profiles include:

Format consists of short easily followed paragraphs.  First-hand accounts from diaries, war correspondent dispatches and reports steel the author’s research.  One is three pages of narrative of an infantry stand against 15 Allied tanks by grenadiers armed with only panzerfausts and magnetic mines, during which a wounded grenadier who made multiple attacks against the tanks, destroying a flamethrower tank with a magnetic mine.   Another excerpt is from panzer gunner SS-Sturmm. Fenn:

We delivered some prisoners to the grenadiers without getting off our panzers, then continued to advance, only to find ourselves on flat open area under fire from Canadian antitank guns.  Four of my platoon tanks were destroyed.  We, in the fifth tank, took a direct hit between the side and the turret as we attempted to escape the fire of the enemy antitank guns.  We were unable to hit Canadian fire positions at a distance of 1,500 to 2,000 meters.  A shell passed through the legs of my commander, Oscha. Esser, but he managed to get out of the turret.  Since it was a phosphorous grenade, the whole tank caught fire.  Somehow, I managed to get out through the loader’s hatch, falling on the ground half burned, I went back to our grenadiers who followed behind.

He includes an appreciable amount of data from tables of organization and equipment for specific dates.  For ease of reading henceforth I will refer to 12.SS-Panzer-Division Hitlerjugend as “Hitlerjugend” or simply “HJ.

Timeline of Events and Formation begin in February 1943 with Hitler’s approval to create new Waffen-SS formations from Hitler Youth volunteers.  It recounts the formation and development of the unit and identifies key dates, i.e., official formation of SS-Panzergrenadierdivision “Hitlerjugend” on June 1, 1943, re-designation, movement to training areas and deployments and key battles.  It begins to introduce key personalities,  Artur Axmann, SS-Stubannführers Heinrich Springer and Max Wünsche, SS-OberführerFritz Witt, “Panzermeyer”, et. al.  It recounts that HJ was desired to be equipped with the latest-greatest weapons and equipment, and to the extend that was realized.  Interesting for modelers is that HJ panzer crews were originally clothed in U-Boote and Italian Navy kit.  Normandy starts with Führer directive number 51 in 1943 and the ultimate movement to France for training and equipping.  Even before D-Day HJ joined the war as we learn in Sabotage and Reprisals.  We learn of Meyer and Witt's involvement in selecting choice areas for the division and subsequent arrival of sub-units.

The Battle for Caen Begins is the first of four Caen battle chapters.  Each chapter presents key events either by attacking or defending HJ unit, or the objective of the battle.  Significant actions involving larger units are presented where appropriate, e.g., SS-Pz.Aufkl.Abt.12, SS-Pz.Gr.Rgt.25 and .26, SS-Pz.-Pionier.Abt.12.  Again, personal narratives enrich the content:

The hatches were closed and the guns were put into firing position.  A hedge obstructed our vision to the left.  When all was clearer, I found myself in the midst of our own infantry and at the same time saw numerous Shermans approaching right in front of them and our flank was exposed.

Within minutes, four or five Allied tanks were burning.  The last one, however, was only spotted at the last moment, when it was about 100 meters away from us and its turret was turning in our direction.

Tank against tank, almost on top of us, when I saw it through my periscope. Then an explosion, the fire of our 7.5cm cannon.  The other tank exploded.  The command panzer managed to destroy two more Shermans.  My tank was then hit by antitank fire, so I moved it into firing position but it then suffered a direct hit. The crew abandoned the vehicle, except the radio operator who was killed instantly.

Presumably since it has been covered ad nauseum, the Battle of Villers-Bocage is not covered in depth.  Not surprising as there are books with hundreds of pages already exploring and dissecting the battle.  Regardless, two pages cover Michael Wittmann and the battle.

With four major battles fought for Caen, numerous individual actions are covered across 84 pages.  I found accounts and stories I have not read about before and although they may not be new to you, they may be new to others.  As such, I find this to be an amazing book and worth the bookshelf space. 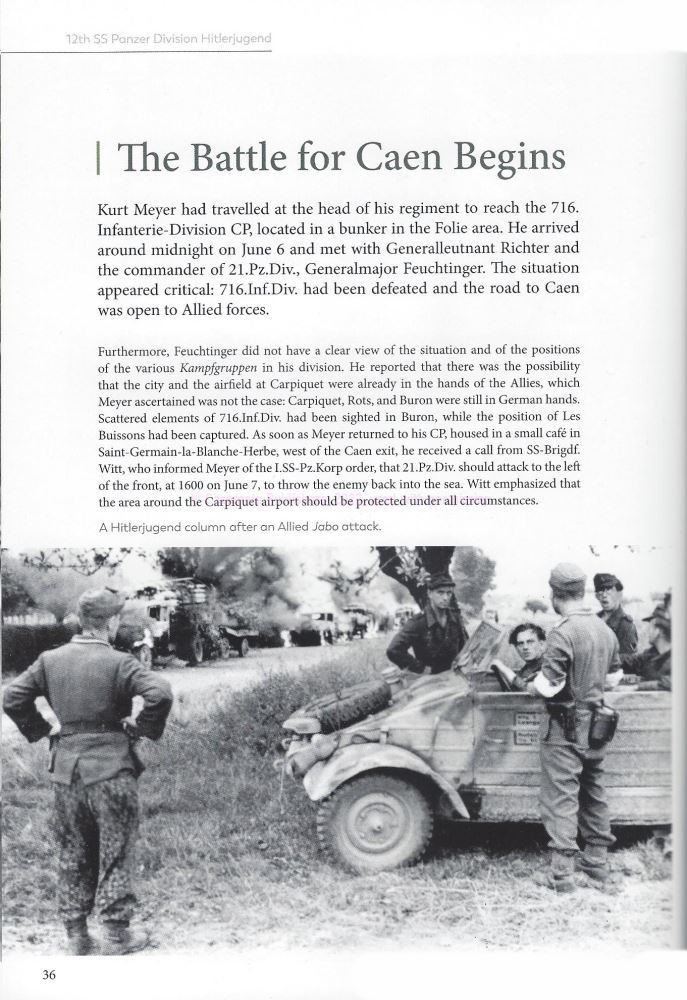 With 150 images to study, the text is richly enhanced.  All are black-and-white.  Most of the photos are of good quality although some are somewhat fuzzy having been exposed in the field in difficult conditions – like combat.  Those photos reveal some surprises for me, including some armored vehicles I thought were phased out of the front-line units in 1944.  One image is of a heavily camouflaged halftrack mounting what looks like a Panzerbüchse 41 and towing a PaK 40.  Another shows HJ soldiers surveying the aftermath of a Jabo attack, their expressions unmistakable.  One of the more interesting photos for me is a view from the Abbey of Ardennes bell tower of artillery observers outside, showing the terrain of the battlefield; I have read of the battles for Caen and the HJ observation vantage but this reveals the scene.

Coat of Arms with explanation. 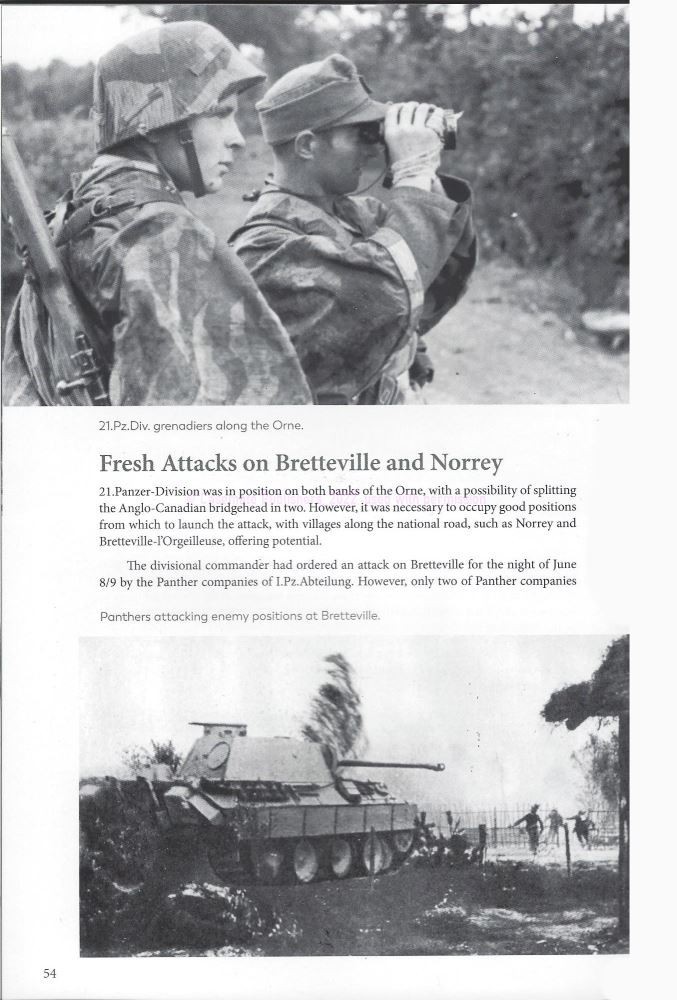 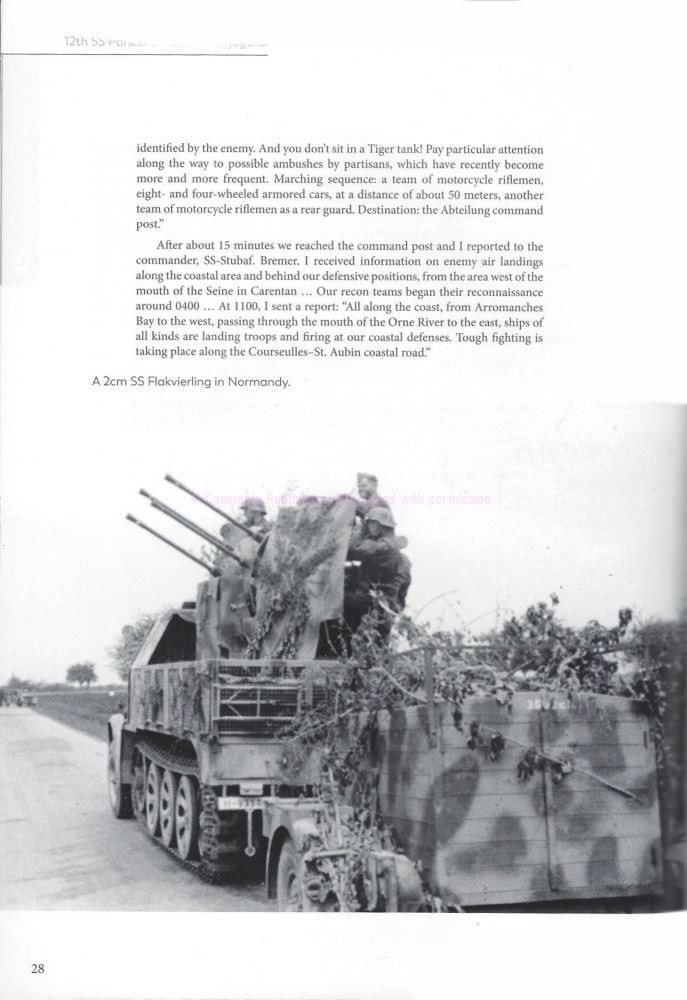 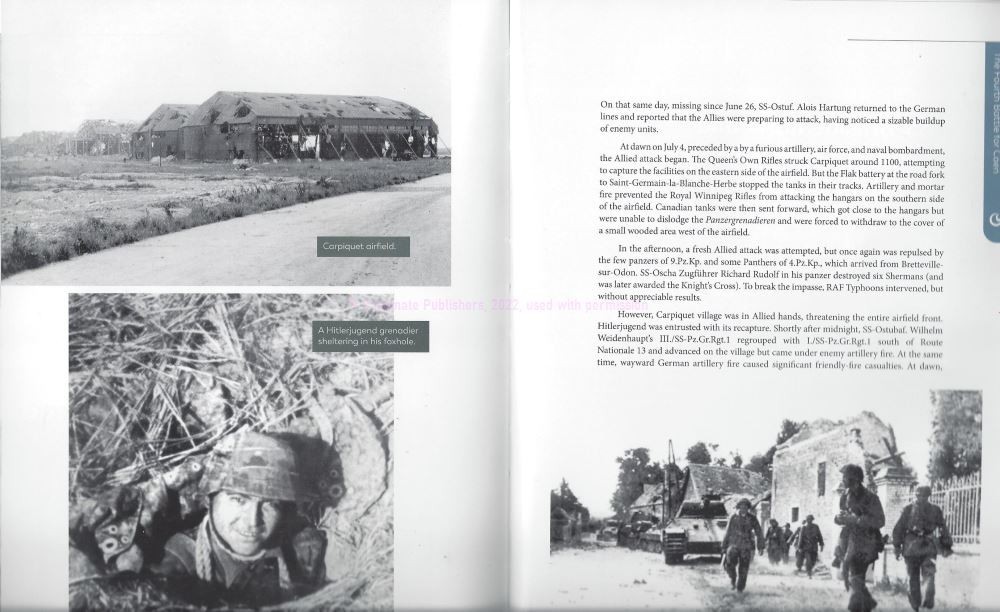 12.SS-Pz.Div. Hitlerjugend and their stand around Caen is an incredible story.  I have read of it in brief, as the background of biographies, and in Allied histories and accounts, but I have never read specifically of SS-Hitlerjugend.  Thus, I am more than impressed with 12th SS Panzer Division Hitlerjugend, From Formation to The Battle of Caen, and Casemate’s presentation through their Illustrated series.  Not only do I think it is a appreciably detailed account of HJ’s six-week stand, the personal profiles and wealth of photographs solidly support the text.  Numerous first-hand narratives raise this book certainly enhance the value of the subject matter.

Again, from a modeler’s view, the book is full of images and source material to stoke my creative imagination for individual subjects, and expansive dioramas.  In the whole of the reasons that I acquire books, this title satisfies and exceeds what I look for in a battle or campaign book.  Recommended.

Please remember to mention to Casemate and retailers that you saw this book here - on Armorama.