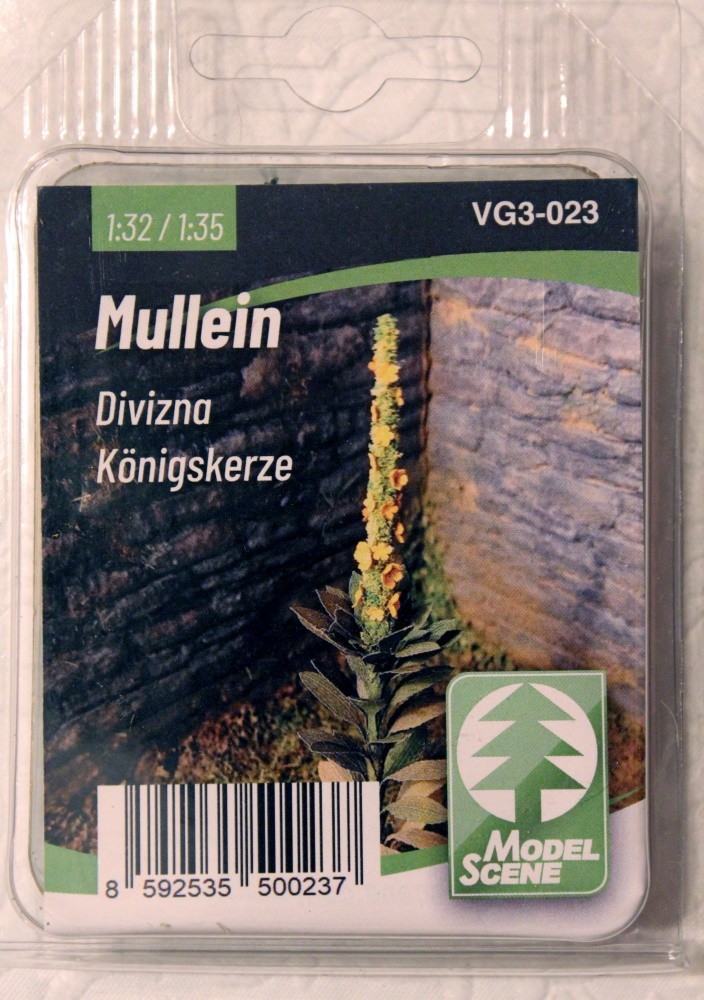 Mullein, also known as Königskerze and  Divizna, is used for medicinal purposes - asthma and other respiratory problems, wound healing, and urinary problems - and also as tea and to flavor liquor.   It is widespread in Europe, Asia, northern Africa, and introduced to North America.  The plant can grow tall, up to10 feet and features soft hairy leaves, a spike-like raceme, and spirals of flowers.  Considered by many as a weed, they are found in unused meadows, along fence rows, industrial areas, road cuts, and wood edges.

Two plants come in a box and each kit consists of:

Those items are contained in a clam shell-opening plastic container with a photo of the product as the box art.  A tab at the top allows you to hang the thin 'box' from a peg.

There are plenty of extra leaves and flowers left over, a bonus for further diorama detailing.

Model Scene has been good to KitMaker Network and you can find more reviews of Model Scene products at this link: Model Scene on Armorama. 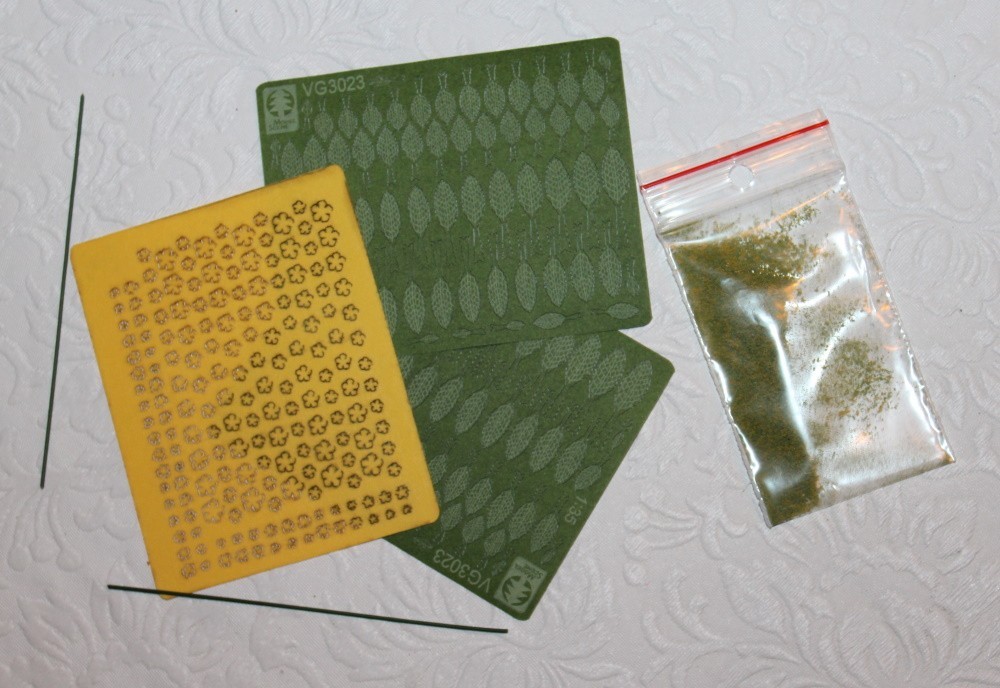 Each leaf features intricate veining, and there are a dozen different sizes, four leaves per size.  Maybe each leaf is slightly smaller, it is hard for me to tell.  I counted five sizes of flowers.  They are used to make the 5-petaled flowers.

Model Scene writes that the parts are easily cut from the sheets.  I concur.

The leaves are finely detailed with veining.  The instructions are high-quality illustrations printed on glossy paper - the back of the "box art."    They guide the modeler along several simple steps:

I stuck the wire stalk in a base and started forming and adding leaves.  There was a learning curve with bending and forming the leaves.  I only managed two runs the first night but the next day the process went quickly.  I used medium gap-filling 5-15 minute cure CA but suggest something that either sets faster, or is tackier.  The first night I ended by running a couple drops of thin CA down the stalk to reinforce the leaves, and create some thing for the next session's glue to grab.   Each flower was formed by pressing each petal layer into my fingertip with a pencil, then dipping it in glue, and joining it to another piece.

I spent about four hours assembling this mullein.  Considering the learning curve between the first evening and the second one, I think the second plant should take less than three hours from cutting out the first leaf until the stalk is in the ground.

The paper is advertised as being able to take acrylic or oil paints.  I will try that next. 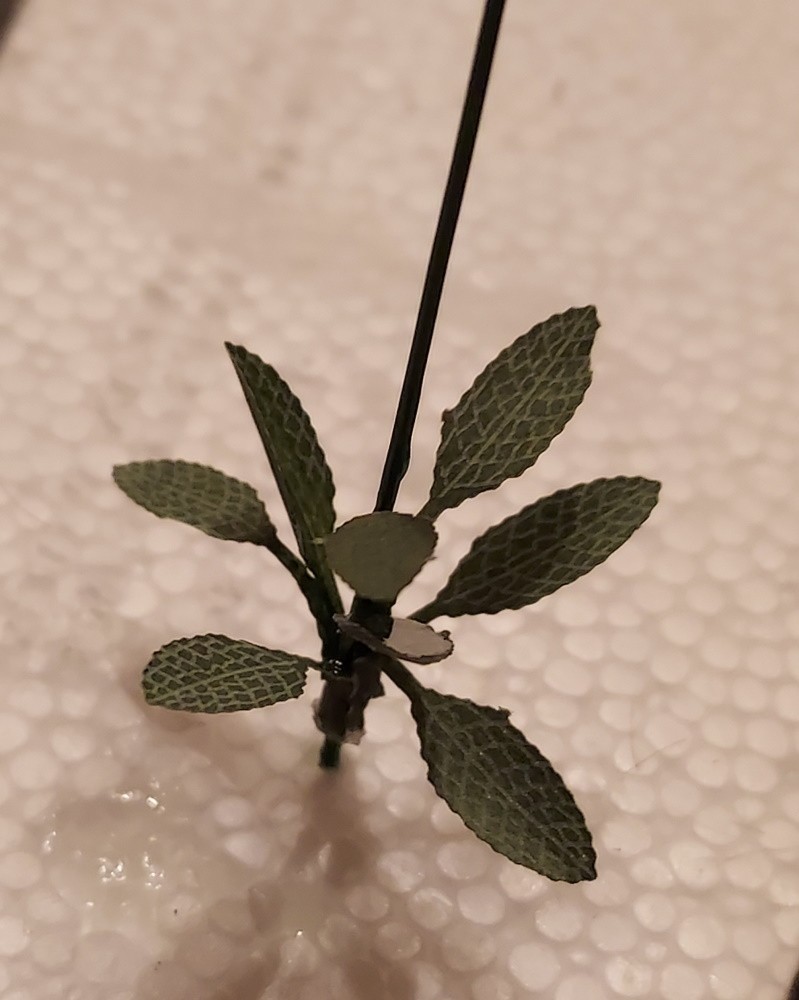 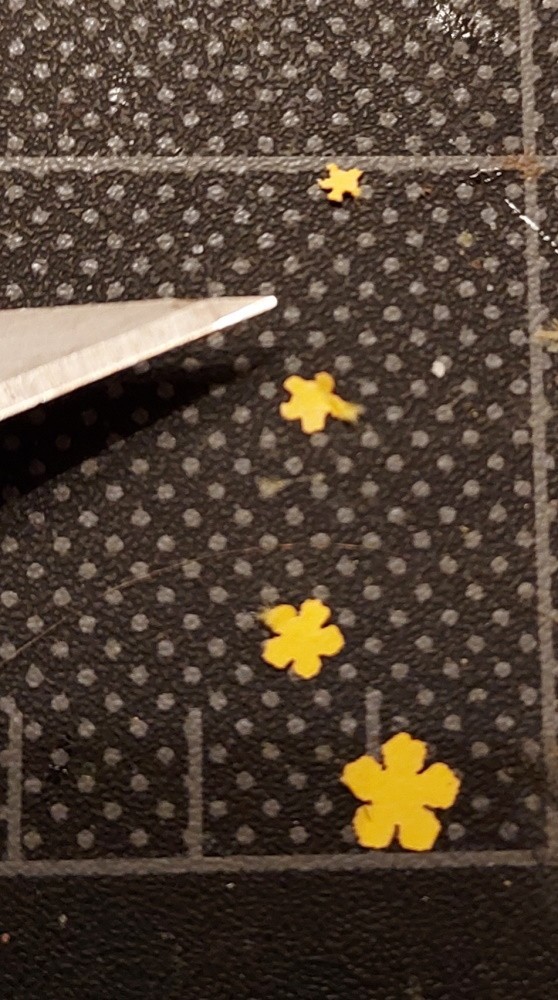 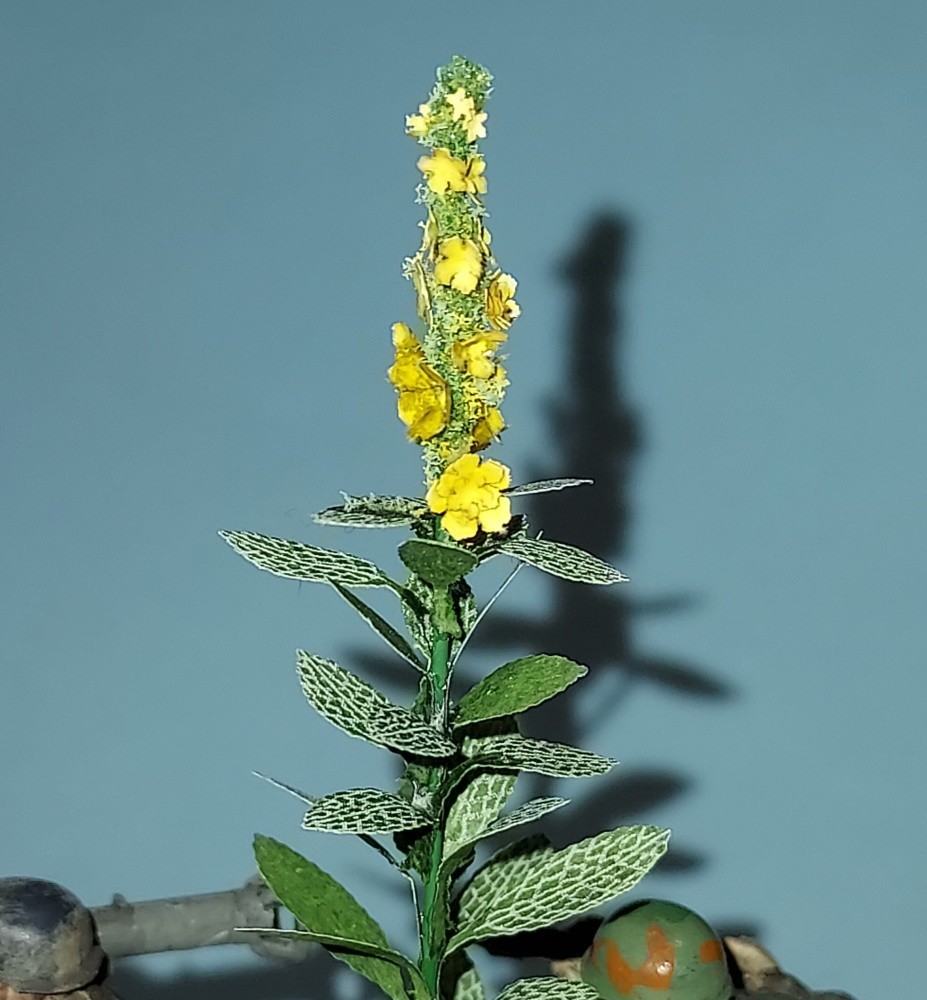 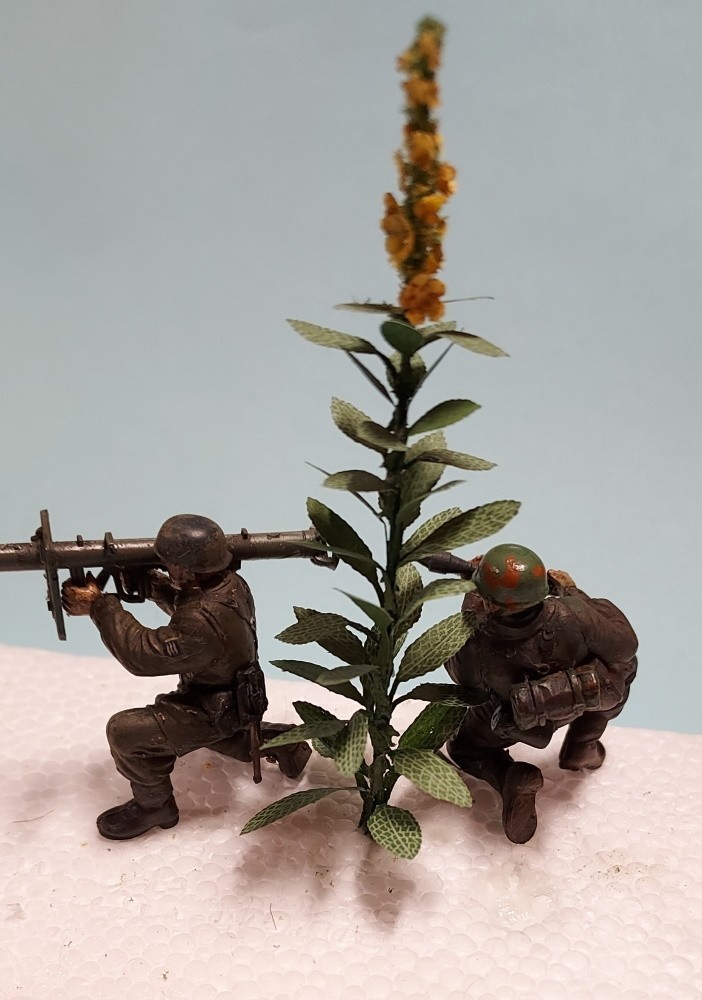 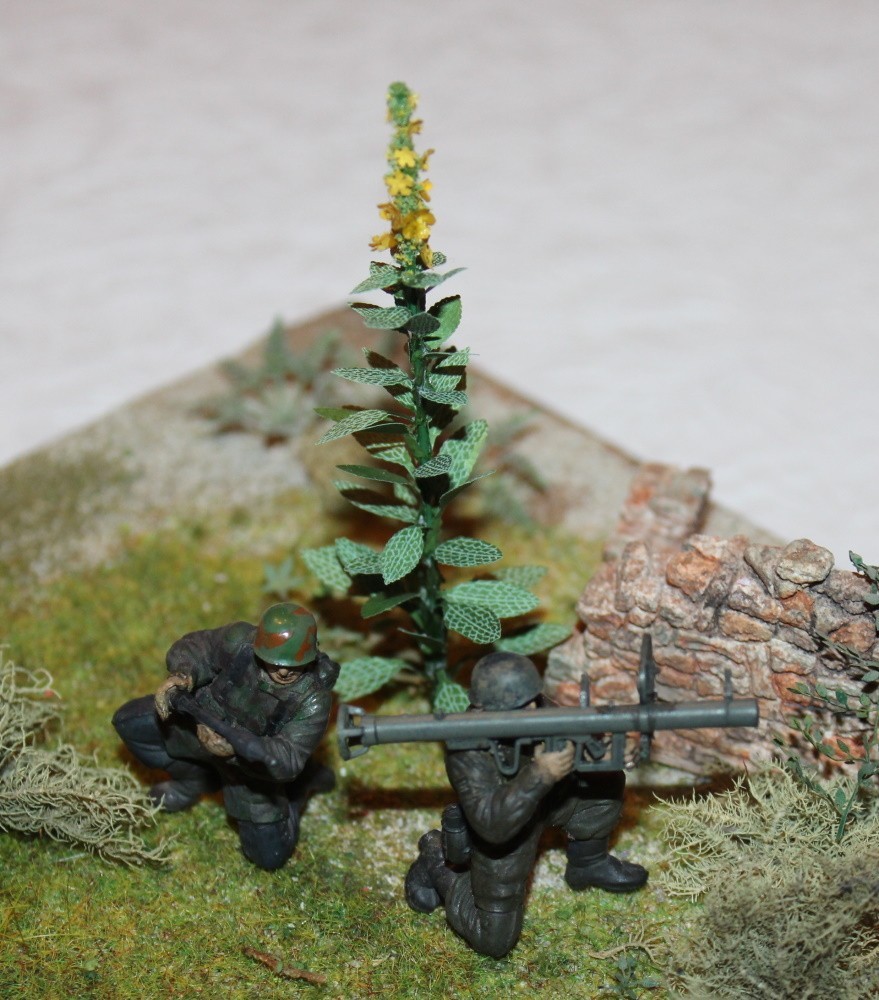 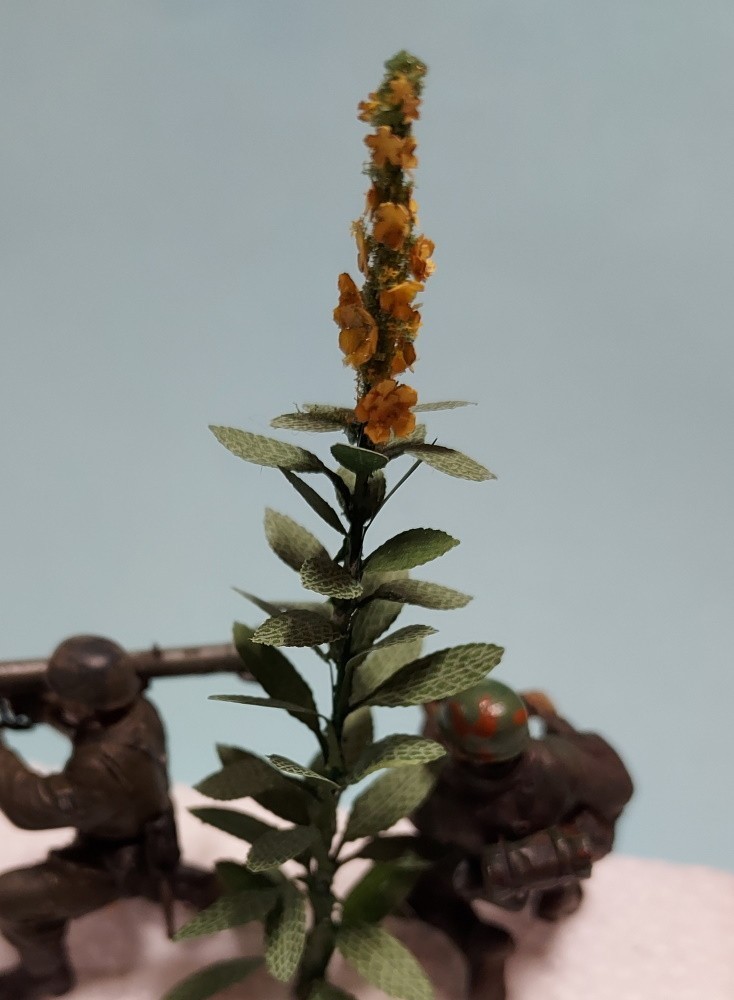 Model Scene's Mullein is a good looking plant for 'military scale' dioramas.  It turned out to be a fun project and I look forward to putting some paint on it.  The laser-cut leaves have good detail and they and the flowers part from the paper sheet easily.  Plenty of extra leaves and flowers are left over.

The only downside I have is the challenge of bending the leaves to hang convincingly if you roll the stems, too.

I really like the look for this mullein and recommend it.

Please remember to mention to Model Scene and retailers that you saw this product here - on Armorama.