REPLY & QUOTE
warreni (Warren Inman) said
It was with heavy heart that I read that Jim Davis had passed away before he even got close to finishing his last build, a 1/72 scale Revell Flower-class Corvette. I hope he gets to finish it wherever he is now.

Jim may not have had many posts in MSW, but he took on one of the ultimate kits while he was still here and was making great progress on the photo-etch deck.

Last week one of the final pieces in my Corvette's puzzle came together and DJ Parkins excellent deck set came from Boystown Minatures in the UK. Now that I have this set I can set about building my Corvette. I still have a few more sets to get but they can come in their own good time, and when I have the money..

So, here is the list of parts I have for the build..

There are still a few set to get including Dinghy and Stowage Sets, Oval Carley Float Sets, Hedgehog Set and Depth Charge Sets. Hopefully I will be able to order them sometime in November, unless I need them sooner. Unfortuantely food and shelter come even above plastic models in my money use regime.

And then today my wooden decking sheet came. It is a sheet made up solely of 2.6mm wide strips of decking. Artwox make it and it is self-adhesive. I am going to use this to make my wooden parts of the Corvette's deck.

So that's it for now. I will post some pictures later but all the sets can be viewed here.

REPLY & QUOTE
youngtiger1 (Mike Bhangu) said
Warren, looks like you have almost ever possible after market set you can find for this beast of a kit. So, I can't wait to follow along this WIP.

REPLY & QUOTE
Longshanks8 (Kev) said
Hi Warren,
Now your talking.... I've been looking forward to this one, thank you for sharing it with us.

REPLY & QUOTE
novorus (James) said
Warren looking forward to this one and will be watching closely..

As you may know I have a build underway of the same kit of which I will be placing in a diorama so may need to pick your brains from time to time. But also feel free to do the same.

Looking forward to seeing your build with great interest.

Had been following Jim's build but unfortunately that will
never be completed.

This is basically going to be a tribute to Jim.

If anyone else wants to join in with a build of their own please don't hesitate.

And a very fast update, here is the Artwox 2.6mm strips I was talking about..

REPLY & QUOTE
Gremlin56 said
Glad to see you ordered the Hedgehog, that is a real gem.
You have enough "heavy metal" for the Corvette now to sink Oz

The Artwox planking looks interesting too, be a great blog to follow and it is a very nice gesture to dedicate the build to Jim Davis.
Cheers mate,

REPLY & QUOTE
youngtiger1 (Mike Bhangu) said
Brother Warren, any update for us on this build?

Brother Warren, any update for us on this build?

None at the moment as I have just started a review build for the site of HMS Belfast.

As soon as that is finished I will be back to this project.

REPLY & QUOTE
warreni (Warren Inman) said
Hmmm.. another 12 months have passed with many changes, but no progress on the 'Vette.. Oh there is one thing, I ordered the remaining sets I need from GLS the other day so I will have absolutely no excuses soon.

Anyone know if you can buy the Revell wooden deck without buying another Corvette?

REPLY & QUOTE
LionsDen (Troy Loewen) said
Have you picked the Flower you're going to build yet? (Bad pun intended)

I cant really talk about "languishing builds" "modellers block" "loss of mojo" etc. as my lack of progress/building is embarrassing to say the least however it would be great to see you get into this one.

It would be exciting to see you attack this with your usual skill level and enthusiasm.

Anyone know if you can buy the Revell wooden deck without buying another Corvette?

So far, none of the other companies seem to make a laser cut wood deck for this ship.

Have you tried contacting Revell?

Maybe they will sell you the wood deck only.

I would give it a shot.

REPLY & QUOTE
Kevlar06 (Russ Bucy) said
Warren,
I wouldn't be overly concerned with the Revell wooden deck. In August I completed a commission of the Revell kit with all the laser cut decking and brass add ons-- the decking was not a really good fit, and the stern and bow of the Flower class were steel plate anyway (the bow is steel plate back to the gun platform almost, and the stern is steel up to the rear superstructure. It looks like the wood planking you have on hand will do the job nicely for the rest if you are careful. Good luck, this is not an easy build by any means, but the finished product is really stunning, especially when painted in the North Atlantic "iceberg" scheme, and heavily weathered. VR Russ

Have you picked the Flower you're going to build yet? (Bad pun intended)

A package arrived at the post office the other day and it contained the following..

I no longer have any real excuses so I will be starting the wee beasty very soon now.

Oh, and no I haven't chosen which Flower to pick yet.

REPLY & QUOTE
Too many models - too little time...

I will be following this with interest

REPLY & QUOTE
warreni (Warren Inman) said
Hmmm.. this thread looks like it is almost dead, but it is time to make it bigger, stronger, better!

Yes it is time to begin the Flower adventure in earnst, well in Virginia, South Australia actually, but I digress...

First thing you has gots to do is cut out all the PE parts and prepare them for soldering or gluing.

I have obtained some excellent, low temp solder I will be using for the big bits, and my trusty CA, in three different types, for the bits that don't need soldering.

I am using some PE Scissors I got from Xuron, my Ryobi rotary tool (until my Dremel arrives), Exacto knife and a number of different rotary tool attachments depending on what I am cutting/grinding/polishing at the time.

Now for some piccies of the PE.. 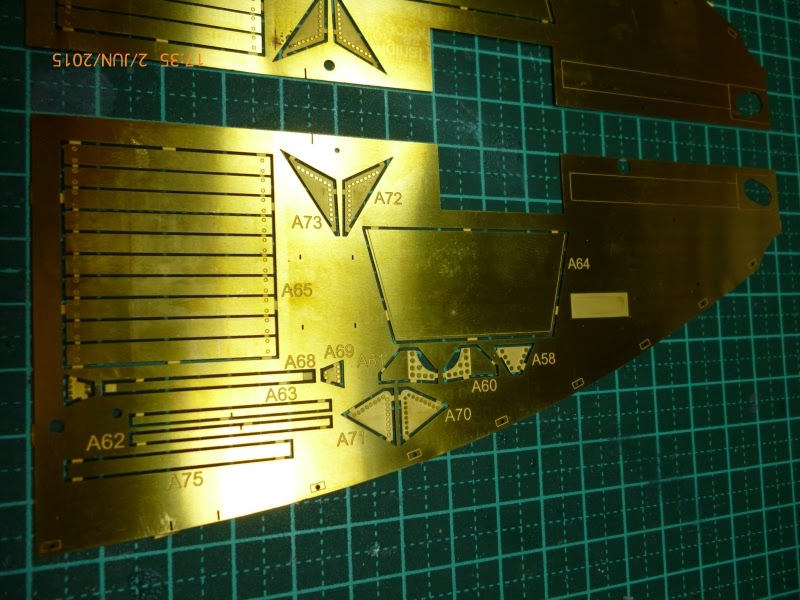 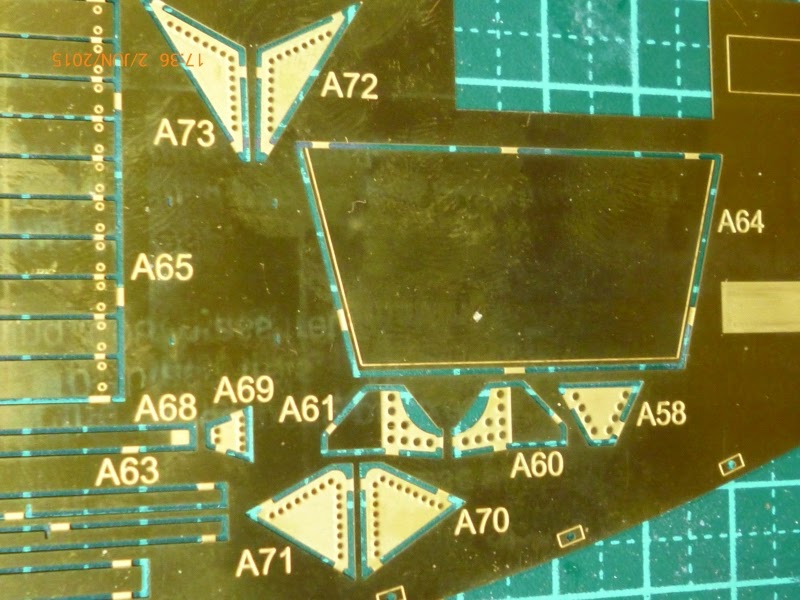 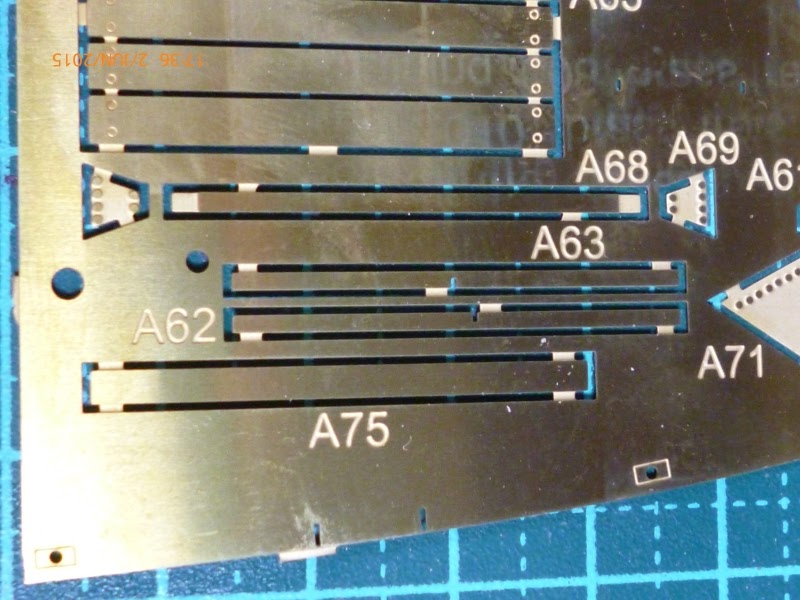 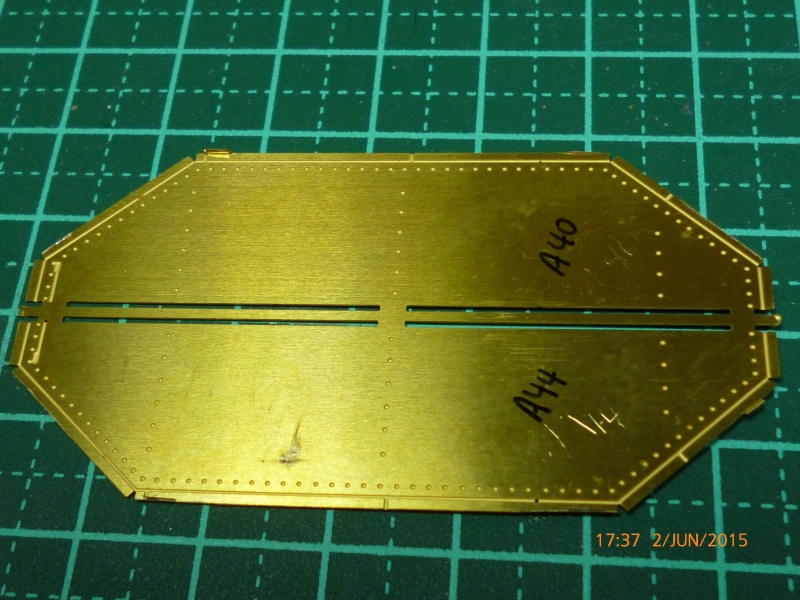 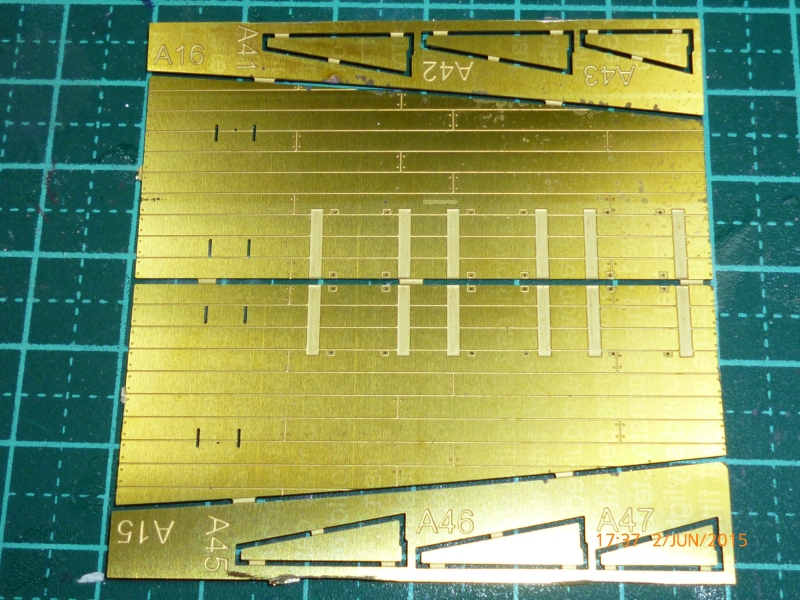 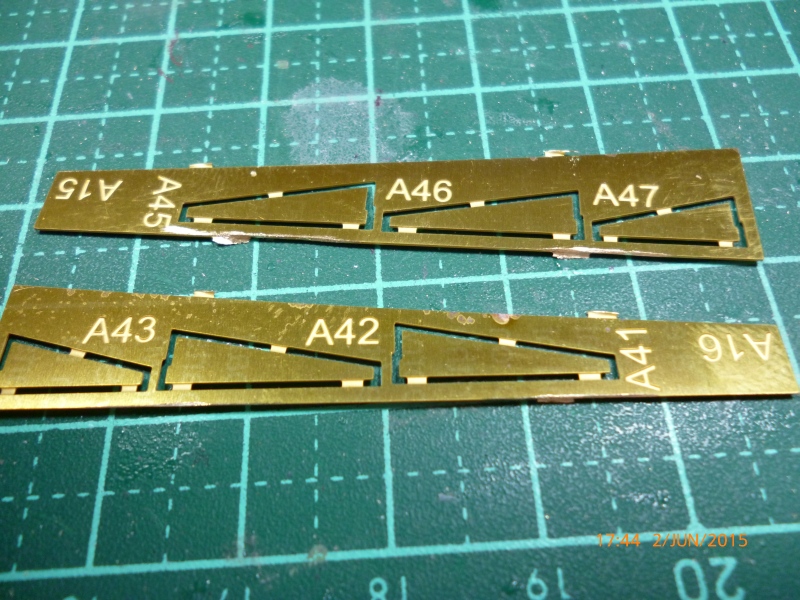 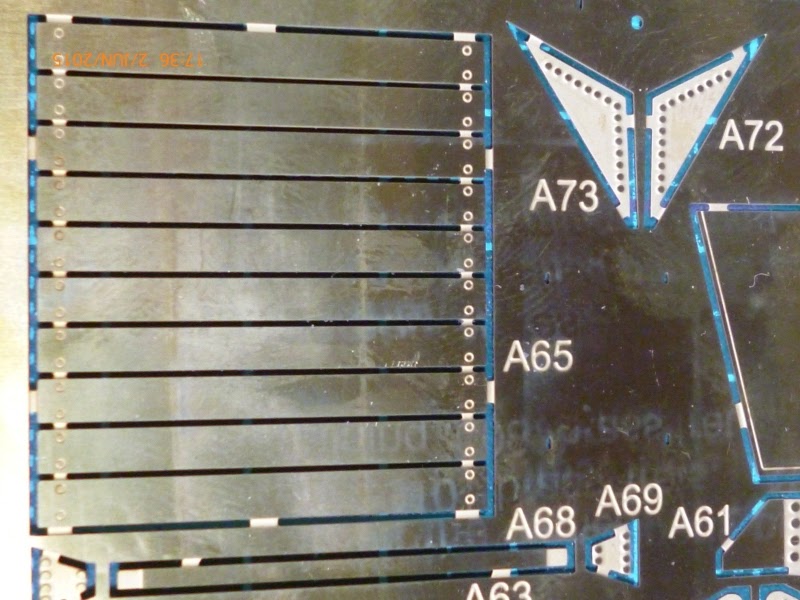 OK. All those parts were cut out of the middle of the main deck piece that totally replaces the plastic deck with PE.

Before doing any soldering or gluing of parts you have to create the rivets that cover various areas on many surfaces of the ship, including the main deck. They are formed by using a centre punch and hammer to create a little divot which looks just like a rivet on the other side. I will show a picture of these in the next installment.

REPLY & QUOTE
Cosimodo (Michael Mitchell) said
Hi Warren,
At least in 1/72 scale you be able to pick the etch up with your fingers

It looks like a monumental project. Looking forward to following along.

REPLY & QUOTE
TRM5150 (Todd Michalak ) said
Great seeing you bring this back to the front of the bench Warren...and all its shiny goodness! Looking forward to seeing you work the rivets soon! Carry on!

Hi Warren,
At least in 1/72 scale you be able to pick the etch up with your fingers

It looks like a monumental project. Looking forward to following along.

And the etch is lots stronger than the Trumpeter stuff in the HMS Kent!!

Glad to have you slong for the ride Michael.

Great seeing you bring this back to the front of the bench Warren...and all its shiny goodness! Looking forward to seeing you work the rivets soon! Carry on!

They will definitely be interesting..

Strap in Todd it is gonna be a hell of a ride I think!

REPLY & QUOTE
TRM5150 (Todd Michalak ) said
Just stocked up on some popcorn and got my seat belt on!!

REPLY & QUOTE
bwiber (Bob Wiber) said
Definitely looking forward to a patented Warreni build. Should be a good one considering the size and the subject....

REPLY & QUOTE
Best health to everyone!
Stay home and build models!
1/72 in the Hangar:
P51D, ME109E4 & FMk22 Spit for the Big 3 Campaign
and a Schwalbe for the Schwalbe Campaign!