REPLY & QUOTE
Maki (Mario Matijasic) said
The tank crew helmets with interior liners... I like that!

REPLY & QUOTE
CMOT (Darren Baker) said
Mario I have looked at six of Black dogs products including figure offerings and I am very impressed with what I am seeing from them. You have looked at a fair few resin figures what was your impression with the one I sent to you?

REPLY & QUOTE
Maki (Mario Matijasic) said
The first Black Dog figure releases in 1/35 scale were very thin (I even heard some modelers calling the figures "anorexic")... however, since then the sculptor has improved considerably. I saw several of BlackDog OIF figure sets and those were really good.

As for the figure you sent; I have been looking for an IDF tanker figure to accompany my IDF model for quite some time. I have several IDF tanker figures from D-Toys, Verlinden, Legend... but I will be using the BlackDog figure instead. So, you can definitely say I like it! The only thing I would criticize is the casting; there are several seam lines to remove which could be a bit tediuos especially if the imperfections are running along the folds of the uniform.

REPLY & QUOTE
CMOT (Darren Baker) said
Mario I believed the line running down the front and off to the right leg was the lead for the comms system, If I am wrong I will need to alter the review I wrote or at the very least get new glasses.

REPLY & QUOTE
Maki (Mario Matijasic) said
Not sure, I think it is just a seam line... will have to look at it again.

REPLY & QUOTE
zapper (Erik von Rosen) said
Hard to tell for sure but it seem like we have another one of the magic two-handled IDF strechers. Might be the longest lasting myth of modern armour modeling?

REPLY & QUOTE
Grindcore (Jimmy) said
I'm pretty sure that the mystery item is a "bullet trap grenade" holder. They attach to the end of your rifle barrel. The old DML Israeli Paratroopers set had them I believe.

I'm pretty sure that the mystery item is a "bullet trap grenade" holder.

Ops, sorry didn't see that. You are correct, those are rifle-grenade backpacks. 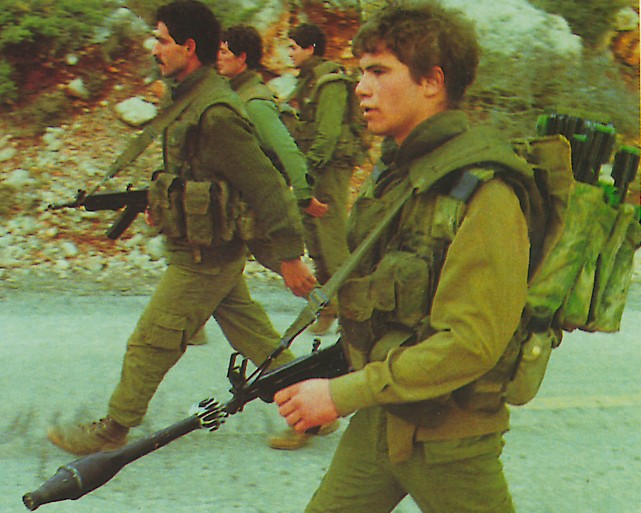 PS Yes, the stretchers are folding type but they should have 4 handles instead of only two.

REPLY & QUOTE
zapper (Erik von Rosen) said
And I now realise that this was a review and not a news announcement.

Guess my brain was slower than usual this morning.

The handle issue is already pointed out in the review.